Put a Little Pumpkin Into Your Life - The Knoxville Mercury 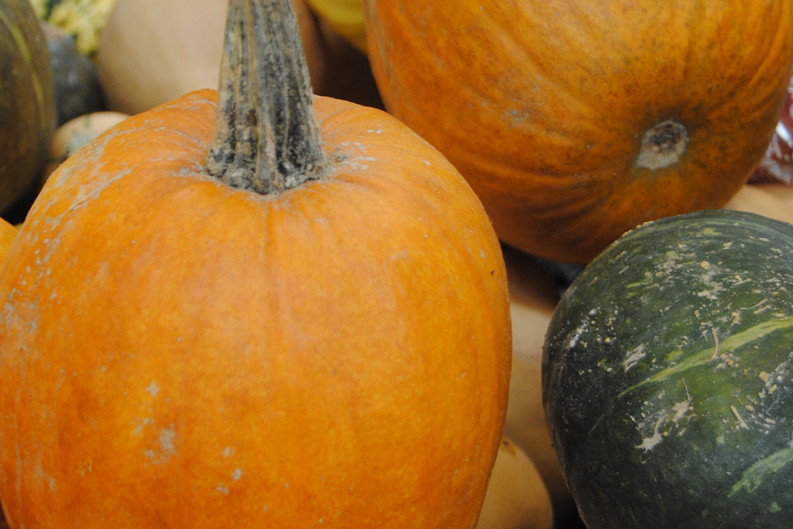 I blame it on Harry Potter. All that pumpkin juice and soups ladled from whole pumpkins and pumpkin pasties. To me it seems the young wizard and his Hogwarts pals led the charge when pumpkin starting becoming a real ingredient, not just the ceremonial nod to the original Thanksgiving pumpkin pie.

But in the past few years, it’s gotten a little overwhelming.

There’s pumpkin lots of things, from breakfast cereal to shortbread, sold in gourmet stores and restaurants like Cracker Barrel, and many other places that are neither fancy nor pedestrian.

Maybe because manufacturers can’t summon a pre-baked puree with the flick of a wand—or maybe because they feel the mystique will make us so senseless we won’t read the ingredient list—many of these “pumpkin” treats and snacks have almost no pumpkin at all.

I am not sure why they even bother to invoke the pumpkin spirit on the label in some cases. Like this “pumpkin cheesecake fudge” I sampled at store-that-shall-not-be-named at the Island in Pigeon Forge. A more accurate name would have been “white butter and confectioner’s sugar with a crusty orange stripe of something on top.”

And seriously, Fiber One 90 pumpkin bars, as seen at the Chapman Highway Food City? I’m no nutritionist, but a quick scan of the label reveals pumpkin flakes as an ingredient—16 down on the list, just after “water” and way behind “chicory root extract.” 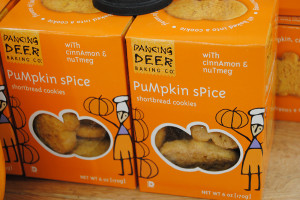 I must note, however, that there are some nice, neat, products in the region, already made, almost as simple as waving a wand (see list at right). Trader Joe’s is leading the charge in this area, obsessed with pumpkin as our California-based buddies are. I counted no fewer than 20 edible pumpkin items in their most recent “Fearless Flyer,” and I am not kidding—they include pumpkin tortilla chips, mochi ice cream, and dog treats. Some of my favorites have way more pumpkin content than the two mentioned above, but are still not what you’d call “pumpkin rich.”

For that, with the exception of Trader Joe’s pumpkin butter and Magpie’s pumpkin tarts and cupcakes (see list again, look for “best in show”), you might have to make your own. That’s what I did, and I have several very nice recipes of a sentence or two each to show for my many trials and errors.

Mostly, I was attempting to get all that lovely vitamin A and fiber from “real” pumpkin, but I was also trying to experience this fine winter squash in a way I could taste. It wasn’t enough to have a ghostly whisper of pumpkin spice; I demanded robust, moist, pumpkiny taste (or at least roasted pepitas richness).

Before we get out the kitchen equipment, though, I want to clarify a few things:

1. I do not mean “pumpkin spice” anything, not latte or cookies or motor oil (as the Facebook joke making the rounds would have you believe). I mean edibles you can make that feature pumpkin, not some slanderous conglomeration of spices used to pimp sales in October. 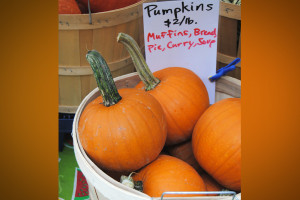 2. To cook with raw pumpkin, you must purchase pie pumpkin, not jack o’ lantern pumpkins, or it will be way too watery. These are fairly widely available in Knoxville. I saw them at Three Rivers Market in a mix of winter squashes selling for $1.49 a pound, coming from nearby Van Buren County, and at the Market Square Farmers’ Market Mountain Meadows booth for about the same price. You can also buy them at Trader Joe’s (though they are doubtless Pacific Northwest pumpkins) and, er, Lowe’s. And the produce stand on Sutherland Avenue.

3. Most stuff worth cooking with real pumpkin is okay to cook with canned pumpkin. Three Rivers Market has a great buy on cases of organic pumpkin from Oregon, though you have to be a member. And seriously, even Peggy Hambright, owner of Magpies, uses canned pumpkins for their pumpkin layer cakes and cupcakes, which are 25 percent pumpkin by weight.

As I was in Magpies mid-Saturday afternoon talking to her about this very topic, and marveling that she now starts selling pumpkin tarts as early as Oct. 3, in sauntered three tall people in full costume. They were, I don’t know, enchanted princesses? Wicked stepsisters? Mages?

In any case, as I was sinking my teeth into the succulent pumpkin cake—not too spicy, very moist—and its sinful cream cheese swirl, they announced that they were doing a dry run, making sure all would be well for Halloween.

“This,” said the tallest, peeling off a full-length glove to make a purchase, “was our first stop.”

“Peg,” said the counter attendant. “That was our last pumpkin cupcake…”

If you don’t have a wand handy, you can put a little pumpkin magic in your life with my personal list of products available in Knoxville, which I chose loosely based on their taste and affordability. It’s by no means exhaustive, so do let me know if someone else has a pumpkin product worthy of the name:

Trader Joe’s Pumpkin O’s: So yeah, it’s cereal, and pumpkin is listed as an ingredient after brown sugar. But this is tasty in a toasty, whole-grain brown rice and oat way, and affordable. Very nice in Cruze Farm 2 percent milk, or—and I know I’m weird—as the cereal base for Rice Krispie treats (instead of the Rice Krispies, yep).

Cruze Farm pumpkin pie ice cream: Dense and creamy, not too sugary, no heavy spices but tastes like, well, super rich, cold pumpkin pie. If you’re lucky, they’ll have it at Three Rivers Market, Whole Foods, or their food truck at the Market Square Farmers’ Market.

Trader Joe’s Pita Crisps With Cranberries and Pumpkin Seeds: Made by an artisan bakery in Canada, these aren’t super nutritious but they are crunchy, with trademark wholesome TJ ingredients like filtered water and rosemary extract. They are sublime with a smear of cream cheese topped with blue cheese crumbles.

Whole Foods pepita brittle with dark chocolate: crispy and light, with just a touch of salt and enough melted dark chocolate to sweeten it up a bit—and add those health benefits. 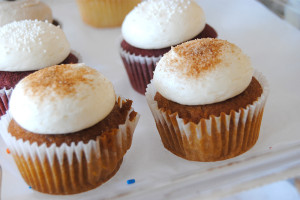 Pumpkin cakes and cupcakes from Magpies Bakery. Sometimes they have cream cheese icing, sometimes caramel. Always tasty in a cake, not muffin, way—rich but not overly spicy.

Simple Pumpkin Side Dish
Cut a pie pumpkin into 1/2-inch thick slices like a melon, leaving the peel on but taking out the seeds. Smear about a teaspoon of butter over each slice, sprinkle each with a teaspoon of brown sugar and 1/4 tsp. of cinnamon, and roast in a pan or baking sheet at 325 degrees until the pumpkin peel is soft and the sugar melted, usually about 45 minutes.