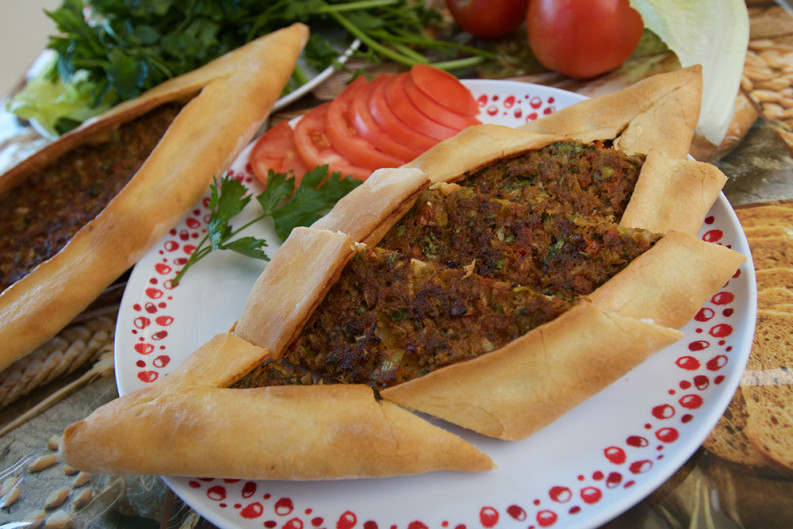 For years, Downtown West Boulevard and its environs have been a strange oasis in the vast stretch of Knoxville that extends westward from West Hills. Although the boulevard is not a cul-de-sac, it has the feel of a private drive that leads somewhere that you have no business being without good reason. As a commercial center it seems to house as many empty storefronts as occupied, which, with the suggestion of comparatively low rent, may account for the wealth of interesting experiences that you’ll find there.

If you can make sense of the entrances, exits, directional signs, and various arrows painted on the pavement leading through the suite of shops along the north end of the boulevard (between Ray Mears Boulevard and Kingston Pike), you’ll find a handful of worthwhile food adventures. Bida Saigon is, perhaps, the most well-known food landmark in these suites, and if you can find that then you’re already near another interesting place to eat: Quality Turkish Market. The word deli isn’t officially tacked onto the name just yet, but it’s the deli part that makes it really worth the hunt.

A.J. and Mualla Sazil own and operate the market, which started as just that—a market for great olives and other essentials of Turkish cuisine. But A.J. (who was one of the original owners of the once-lauded and now defunct Ephesus on Cumberland Avenue) says, “We wanted to put some food over here, some specialty food.” Which they did just a little over a year ago. 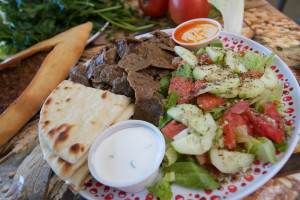 The menu here is compact with only 12 items and some recurring specials that make irregular appearances, usually on the weekends. But the star of the show, A.J. says, is donër kebab: “That’s our specialty. It looks like gyro, its principal is the same, the way you cook it and all—but it has totally different spicing.”

Kebab, in this instance, isn’t a skewer. The meat—a conical conglomeration of seasoned lamb and beef—is cooked, like the gyro, on a vertical spit and shaved for wraps and platters. A.J. points out that the shape of the donër he’s cooking is irregular, it’s not a perfect cone. “It’s hand-made,” he says. “I don’t make it here, but I have people making it for me.” That’s the reason, he says with wink and nod, why he can’t tell me what the spices are.

“You can go online and they’ll say this is what you need to add, but it never turns out,” he says. “There’s always a secret little pinch of spice.”

The donër is quite good—tender, very flavorful, and savory. I eat most of mine plain before remembering the side of tzatziki sauce. The donër platter comes with a sizable salad of lettuce and tomatoes that’s dressed with a magical and secret combination of oregano, mint, lemon, garlic, and olive oil. At least, that’s what A.J. says is in there (again with the wink and nod). It’s very tasty, as is the pilav—tender, white, long-grain rice and strands of vermicelli. The platter also comes with a ramekin of hummus and slices of pita. 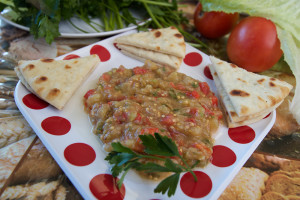 Other items on the menu are mostly familiar Middle Eastern fare: tabbouleh, grape leaves, and baba ghannouj, as well as a veggie wrap that A.J. recommends. But the Turkish way of cooking them can be different. “The idea is the same, but the spicing can be totally different,” A.J. says. “Our baba ghannouj, for example, we don’t use tahini.”

Fridays or Saturdays often bring special additions to the menu. One of the most popular is the lahmacun, perhaps better known as Turkish pizza.

“It’s ground beef, tomato, onion, parsley all mixed together. Authentically, you make it round, squeeze some lemon on it, roll it and eat it like that,” he explains, adding that they serve it as a pita.

The place is small—there are only four tables and a few stools at a small counter. It’s a bright, clean space and there’s still good shopping available, from olives to Turkish tea sets; but the focus now is food service. It’s definitely worth the effort to find, and the Sazils are friendly hosts who you’ll be glad to know. But don’t expect them to give up their secret recipes.