Scenes From a Green Drinks Knoxville Event - The Knoxville Mercury 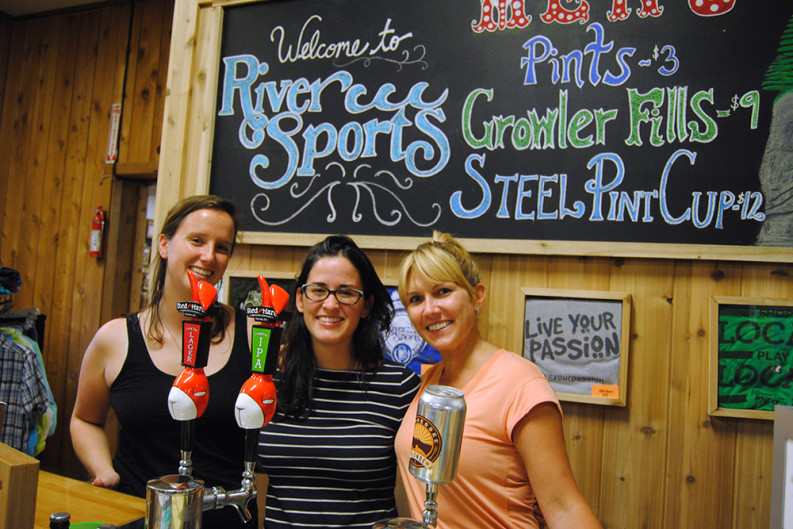 You can get in a really good conversation about beer, Pond Gap elementary school’s community garden, the Bugfest at University of Tennessee, dog breeds, and nuclear energy at the Tennessee Valley Authority.

Or, you can just sit in an Adirondack chair outside River Sports Outfitters on Sutherland Avenue and sip a draft from a cool energy-company swag cup that turns from green to blue when the cool suds hit it.

I did all of the above at the September monthly meeting of Green Drinks Knoxville, a social gathering of people interested in environmental issues of any kind that happens usually on the second or third Tuesday of a month, promptly at 5:30 p.m.

It was a couple of hours of enjoyable nattering, and I’m a little embarrassed to admit that it’s been going on like this entirely without my support or knowledge for a couple of years now. The organizers parlay with a spot to contain the meeting, and hopefully offer a bit of a discount on beverages to Green Drinkers. Then at the appointed time, fresh-faced greenies of many ages and almost every description descend.

This meeting had lots of Americorps volunteers, a dignified beer hound named Blue, an academic from UT’s Environmental Science department, a TVA exec, a social worker originally from New York, and a lady who once lived at a Girl Scout camp.

But it could have been anyone interested in the environment and sustainability, says one of the lead organizers, Robin Russell, who works for a small company that delivers turnkey, clean, and renewable energy solutions.

“Not everybody drinks when they come—we’re not really a drinking organization,” she says. “We’re more of a environmental, social, and professional network that meets at Happy Hour. A lot of the folks who come have professions where environmental work is connected to what they do for a living, but many just share our interest in sustainability.”

For me, it was an awesome hodgepodge of friendly—but not extroverted—people to chat and exchange cards with. I guess this is called networking? Before I left I had discussed the wonders of one of the beers on tap—Fanatic Brewing Company’s Tennessee Blonde—with the River Sports employee helping dispense beer. We agreed that it was smooth and yet robust, a worthy effort from one of my favorite brewmasters, Marty Velas, now starting his own company after a successful career with Smoky Mountain Brewery.

I also learned more about the rooftop gardening on Market Square, and what some community farms are up to, and got a card so I could follow up on the big-game dinner that UT is somehow involved in come February.

There were no hard sells, just lots of good conversation. Russell, who has been part of Green Drinks in other cities for about 15 years, notes that the Knoxville chapter does invite special guests for most meetings, and they might say a few organized words. Next meeting, for example, will host Patience Melnick, the new executive director of Keep Knoxville Beautiful.

There are also a couple of meetings a year, like the one I attended, that don’t have a set topic. One of the most popular, Russell says, was April’s gig at Armada Craft Cocktail Bar in the Old city, when its creative director Zachary Calfee taught the group how to make green cocktails using fresh, locally-sourced ingredients, on a budget.

“The drinks were even visually green,” Russell says, “because I’m corny like that. We all sat around the bar and he walked us through the process, doing his own infusions, using mint from local farms. Everyone raved about that concept and I’m sure we’ll do it again.”

This evening I went to, though, the most formal we got was going around introducing ourselves and sharing the most unusual food we’d ever eaten.

Honestly, I’m not much good at remembering names from verbal introductions, and this was no exception. But I remember these foods: dog (sorry, Blue), spoonbread, baked crickets, suet, nettles, potted meat. Plus tripe, bison, ostrich. And, um, Spam and pineapple loaf.

Some of the younger participants had never heard of it. I filled them in, feeling like I was finally earning my keep as a “networker.”

If Patience Melnik is going to try to top that entertainment, she has her work cut out for her. υ