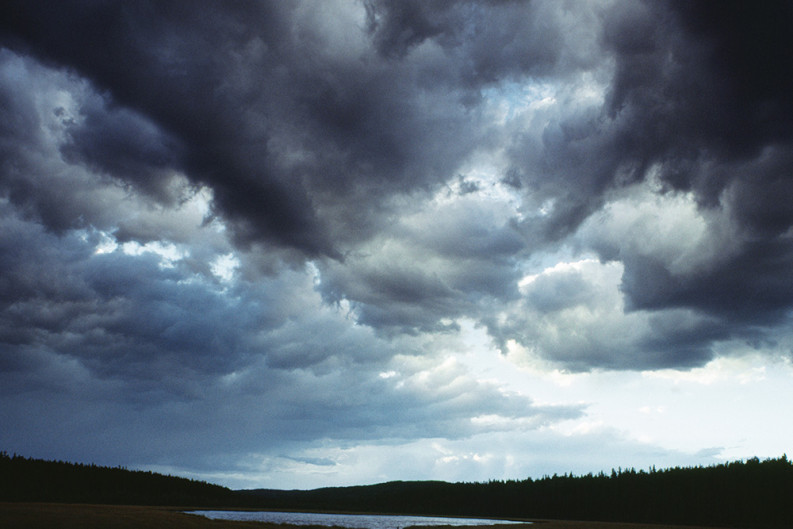 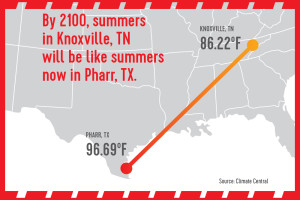 Knoxville’s climate is changing. So is the climate for talking about it.

Conversations in Knoxville among city officials, politicians, and faith leaders seem to have turned the corner from debating whether climate change exists to wrestling with how to handle it locally. Here and abroad, 2015 has been a pivotal year. Pope Francis and President Barack Obama stepped up the moral and political pressure for a global agreement on climate change by year’s end, in some cases galvanizing Knoxville’s faithful as well. And the city has been making concrete changes to reduce local energy use and to plan ahead for predicted extreme weather like flash flooding and major winter storms.

According to research by Climate Central, an organization of leading scientists and journalists who research and report climate change, predicted climate impacts in Tennessee include: An increase in days with a heat index above 105 degrees (from zero to 58 a year within a decade or two); summer temperatures equivalent to those of Southwest Texas by 2100; and a continued increase in the number of intense downpours. Climate Central studied 65 years of climate records to find that, already, Knoxville has had a 112 percent increase in heavy downpours between the 1950s and the last decade—the 14th-biggest increase among U.S. cities.

Dr. Jack Fellows, director of the Climate Change Science Institute at Oak Ridge National Laboratory, says these numbers are in line with the other research his team has studied or completed. In addition, he says, warmer winter temperatures will mean more pests survive the winter, spreading faster and threatening trees and crops.

The Climate Change Science Institute has just started working with the city to provide very specific local data for policymakers: Where will increased cloudbursts cause the worst flash-flooding, and how can the city steer developers to shoulder the cost of preventing it? Which specific patches of asphalt should the city target for salt and sand in winter to prevent icy hazards?

City of Knoxville engineering director Jim Hagerman has said in a previous interview that he hopes this kind of analysis will help the city develop a stormwater mitigation program. As soon as early next year, a mitigation “swap” approach could give developers the option of offsetting their stormwater impacts by reducing risks at “hot spots” where investment could save homes and lives during flash floods.

This kind of modeling has been done in larger cities but is very unusual for a city the size of Knoxville—which is not being asked to pay for it, Fellows says. The Climate Change Science Institute plans to share the resulting “tool kit” with other small cities of similar elevations.

“We’re kind of using the city as a lab to see how we can make our science more useful to society,” Fellows says.

The pope’s recent U.S. visit and address to Congress led to broader climate change discussion than Fellows has heard since beginning to study the problem in 1987.

Two months ago, Fellows says, he met with 35 Southeastern mayors. Half told him they don’t believe in climate change. “But we still talked for two hours and they wanted to know how to plan for it,” he says. “That wouldn’t have happened five years ago.”

Locally and internationally, many aspects of climate change have recently been reframed from “an environmental issue” to “a poverty and justice issue” because the poor, unable to move, suffer most from the impacts of changing climate.

Through the Smarter Cities partnership, the city of Knoxville has focused since 2013 on energy efficiency as an issue linked to poverty. The partnership, which includes nonprofits, KUB and others, won a TVA Extreme Energy Makeover grant that was announced in April at $7 million but increased to $15 million by the time it rolled out in August.

The grant will weatherize almost 1,300 Knoxville homes between now and Sept. 2017, says Erin Gill, Knoxville’s director of sustainability. Most beneficiaries will be low-income residents whose exorbitant electric bills put them on the verge of homelessness.

“Data that comes out of that I think will be extremely compelling to help us make the case for additional funding in future years,” Gill says. “I think it sets us up for long-term success.”

The Smarter Cities partnership began the effort that led to the grant, using technical assistance from IBM to grapple with the growing number of low-income residents, living in old houses, who were unable to pay their power bills. IBM made five key recommendations—including educating working-class residents about energy efficiency, paying for energy efficiency upgrades, and engaging landlords—for completion within 12 months.

That timeline hasn’t been met, Gill acknowledges, while adding, “I’m very proud of what we’ve been able to accomplish with very little funding.”

On the education front, the city developed a website (savingsinthehouse.com) with free or low-cost tips for reducing electric bills, as well as a new pamphlet, Gill says.

“But something we heard very loudly and clearly from our community partners was: You’ve got to engage people directly,” she says. A combination of national and local nonprofit grant money enabled the local nonprofit SEEED (Socially Equal Energy Efficient Development) to start canvassing door to door in three pilot neighborhoods. SEEED workers share money-saving tips, give away an LED light bulb, and invite residents to a community workshop on how to save on electric bills. Seventy people turned out for the meeting in Morningside, the first neighborhood, Gill says. This week SEEED will start the same process in Mechanicsville, and the area around Austin-East Magnet High School will follow, Gill says. She says when the funding runs out, the city hopes to incorporate the effort into the Extreme Energy Makeover Program.

Landlords pose a challenge because they aren’t usually responsible for the electricity bill, giving them little incentive to spend money on improvements. To motivate them and help some of the city’s poorest residents, Knoxville plans to focus some of the Extreme Energy Makeover funding on government-subsidized Section 8 housing rentals, Gill says. And in November the city is hosting a “landlord summit” to provide landlords with resources, not only for energy improvements but also other help for themselves and their tenants, she says.

A Matter of Faith

Pope Francis’ first solo encyclical (a papal letter essentially setting policy for the church), issued this summer, focused on climate change as a moral issue. That and his recent visit to the U.S. has called more members of Knoxville’s faith community to action. Tennessee Interfaith Power and Light, a Knoxville-based chapter of the national organization, hosted a clergy panel on the encyclical and climate change last month that was attended by about 40 people, says its executive director, Louise Gorenflo.

“A good 25 percent were Catholic, and that was completely attributable to the pope,” she says. “The pope is the highest-profile person on the planet who is openly talking about what’s coming, and also offering a way forward.”

Rev. Eric Murray, pastor at Messiah Lutheran Church in Knoxville, says he hopes to hold a study group to reflect on the encyclical at his church. “For people of faith, the difficulty is what to do?” he says. “How do we respond as an individual? I think the conversation does have to move into the political sphere.” He and two other ministers left a copy of the encyclical for U.S. Sen. Lamar Alexander.

“If we can just begin to have conversations, and those can filter to our local representatives and state legislators, support our mayor and local elected officials in making changes locally, maybe that can begin to help,” he says.

Tennessee Interfaith Power and Light and Citizens Climate Coalition, a small group ministry of Oak Ridge Unitarian Universalist Church, are co-sponsoring a vigil and concert in Oak Ridge on Sunday, seeking to raise awareness in advance of the UN Climate Change Conference slated for Paris in November and December. Tennessee Interfaith Power and Light, a Smarter Cities partner whose members are individuals and church congregations, plans a similar one in Knoxville in December.

The group is in its third incarnation; after a four-year hiatus, it revived leaner, with no paid staff. But it has moved beyond “greening” church buildings to become more politically active, Gorenflo says. The group helped convince Knoxville City Council to pass a resolution supporting EPA’s green power plan, which will cut carbon pollution from power plants and set new requirements for individual states. Although it has one of the least stringent state goals, Tennessee will be required to reduce its levels by almost half, according to the plan unveiled in August. Gorenflo says her group and others successfully lobbied EPA to require states to include low-income stakeholders in the planning process.

Gorenflo says Knoxville is a climate change leader in Tennessee, “and it could be the leader.” At the end of last year, the Obama Administration named Knoxville one of 16 “Climate Action Champion” communities nationwide—and the only one in the Southeast—for its efforts to reduce greenhouse gas emissions.

Gorenflo and Fellows credit Mayor Madeline Rogero, who served as a member of Obama’s State, Local, and Tribal Leaders Task Force on Climate Preparedness and Resilience.

“Turns out that Southern Appalachia is sort of in a Goldilocks position,” Gorenflo says. “Compared to what is south and east and west of us, we’re not going to have the temperature increases.”

According to Climate Change Central’s analysis of data collected by the U.S. Global Change Research Program, “A planning implication …is that Knoxville will become a destination for people wanting to escape from extreme heat and precipitation events.”

“We need to understand people are going to be coming here just for some very basic needs,” Gorenflo says. “People don’t need good shopping. People are going to need water, portable housing, and transportation, and we are far from ready for that.”

What: Climate Prayer Vigil and Concert

Info: Speakers and guests will include climate scientists, faith leaders, and environmental activists. Sparky and Rhonda Rucker of Maryville will perform a free concert of acoustic blues and their own climate songs at 4:15 p.m.