An Appreciation for That Farmers' Market Booth With All the Goodies, VG’s Bakery - The Knoxville Mercury 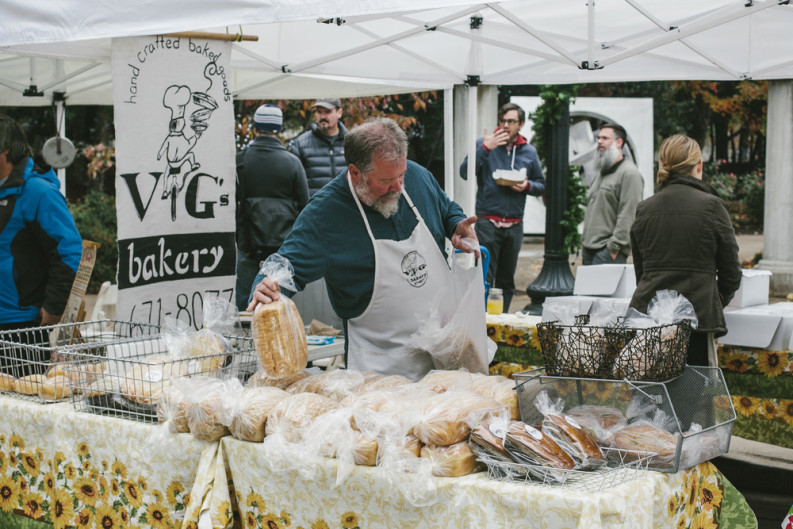 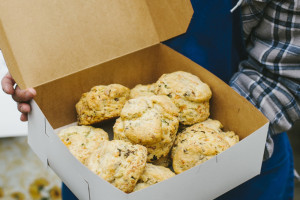 It’s early on a Wednesday morning at the Market Square Farmers’ Market—there are a few vendors managing warm cups of coffee while setting up booths for the day’s business. But at the center of the Square there’s a trickle of customers visiting one stall that’s already up and running. The neatly stacked white boxes are the tell-tale sign that it’s VG’s Bakery that’s attracting all the early attention; and that’s how most Wednesday mornings on Market Square commence during market season.

Dave Gwin, who co-founded VG’s with his wife Vanessa, arrives early to set up his pair of tents; his son-in-law, Mason, arrives shortly thereafter with the boxes full of tender and freshly baked goodies that draw early visitors.

There are a handful of excellent breakfast restaurants around downtown, but for many, the best way to wake up is by grabbing a cinnamon roll, a blueberry scone, or even a whole loaf of sweetly glazed and cinnamon laced pull-apart bread at VG’s. If you add a cup of coffee, you may very well feel like you’ve dined in the fashion of Madison Avenue’s corporate warriors. But I can promise you that, generally speaking, they won’t find much better quality than what awaits you in any one of VG’s white boxes. And the good news is that access to this breakfast of champions isn’t limited to downtown; you’ll find VG’s at various farmers’ markets all around the city as well as at their bakery in the Kohl’s shopping center in Farragut.

Of course, VG’s makes a variety of baked goods, from cookies to cornbread. And they’re made by the work of human hands. Gwin laughs a bit when asked about words like hand-crafted and artisan when it comes to mass-produced products: “When you’re pumping it out of a machine and it never touches human hands, I lose a little of [the sense] of artisan. I saw a commercial for Firestone the other day where they used the word handcrafted … handcrafted tire service?”

Gwin recalls that at the beginning, he and Vanessa were “amazed at the bakeries that were around when we started our bakery—they didn’t bake anything from scratch.” Early on, VG’s was offered the opportunity to sell typical grocery store birthday cakes that arrived frozen and complete with frosting: “A vendor that we bought flour from asked why we didn’t sell decorated cakes. We told him we didn’t have time to do that. He said, ‘I’m gonna ship you a case,’ but they weren’t ours. So we just had a party with the shopping center…. But my point being that I wouldn’t have known that they [the grocery stores selling similar cakes] weren’t making all their stuff.”

Despite the fact that VG’s business has grown tremendously during the ensuing years, the product remains as handmade, good, and decadent as ever. Although sweets, particularly cookies, are their most popular offerings, VG’s sells a limited selection of breads, including an English Muffin bread. It’s a spongy loaf with an open-textured crumb that’s quite nice for toasting—like an English Muffin, it drinks up butter and jam with glorious indulgence.

My personal favorites from the sweet selections include a wild-blueberry hand pie that bursts with blueberries and is topped with a powdered sugar glaze that clings perfectly to the pastry. While I’m generally nonchalant about cookies, VG’s Nutter Butter sandwich cookie is an exception; two peanut butter oatmeal cookies surround a luscious peanut butter crème that surpasses its namesake by leaps and bounds and size—it’s a big bite. That’s also true of the very rich chocolate raspberry oat bar. I’m pretty sure it has more chocolate ganache than anyone should eat in a single serving.

VG’s doesn’t skimp on indulgence, that’s for certain. But I suspect that any one of the regulars who practically race to grab their morning favorites will tell you that gratification of this nature isn’t really an indulgence at breakfast. It’s just an efficient way to get a sweet start on the day.