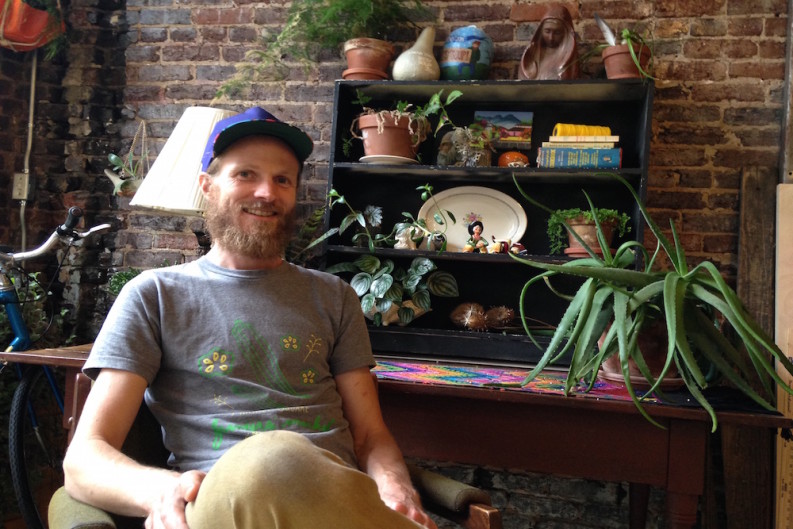 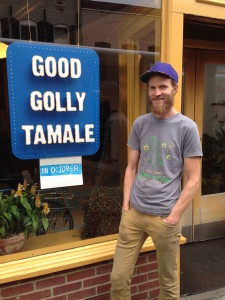 How hot are Good Golly Tamale‘s namesake products? So hot that a beans and cheese tamal melted my fork recently, no metaphor.*

But Good Golly’s  tamales have also proved popular enough that Matthew Miller, owner/operator of the GGT food trike that delivers steaming hot tamales to the Market Square Farmers’ Market, will soon open a bricks-and-mortar lunch spot in the former Aisle Nine location in the Old City. Good Golly will open for lunch starting Oct. 14 (Tuesday-Friday, 11-4 p.m.) and will offer at least three tamales options a la carte (beef, chicken, and vegan), or with sides of house-made soup beans, salsa, and crudito, El Salvadorian sauerkraut. Bottled drinks will be available in the cooler.

Miller started Good Golly with his friend Chris Watson two years ago. He is now the sole owner with about 10 employees rolling tamales and manning the tamale stand. A spiritual man, Miller plans important steps in his life according to the advice of mystics and mediums. Good Golly will open in early to mid October, after Miller consults with his numerologist to choose the most advantageous date. A friend who studies esoteric arts burned some sage and blessed the space, setting the energy for its new incarnation.

The former grocery store is now decorated in Miller’s signature style, which he describes as “old lady vibe: cozy and warm with a lot of lamps and plants and old chairs.” Beth Meadows‘ paintings hang on the brick wall as this month’s featured art show.

Miller continued to lease the kitchen for food prep after Aisle Nine closed in February, and recently negotiated a restaurant lease, but just until the end of this year. After his three-month experiment in bricks and mortar, Miller will make a decision to renew the lease, move locations, or return to a transient businesses model, selling tamales exclusively from the back of his trike.

Miller says the Market Square Farmer’s Market remains the cornerstone of the business and will not be affected by the Old City lunch spot. Customers will find the Good Golly trike with the red pom pom-trimmed umbrella parked alongside the food trucks on Union Avenue, every Saturday and Wednesday, as usual.

* The provided fork, which I casually stabbed into the top while searching for a sheltered spot to devour the bite of piping street food, was made with corn-based biodegradable plastic selected with an eye toward sustainability. Likewise, the ingredients in the tamales are organic, non-GMO, and locally sourced from small farms as much as possible. The transportation vehicle, a vintage industrial tricycle, is powered by leg muscles alone, releasing zero pollution into the air.