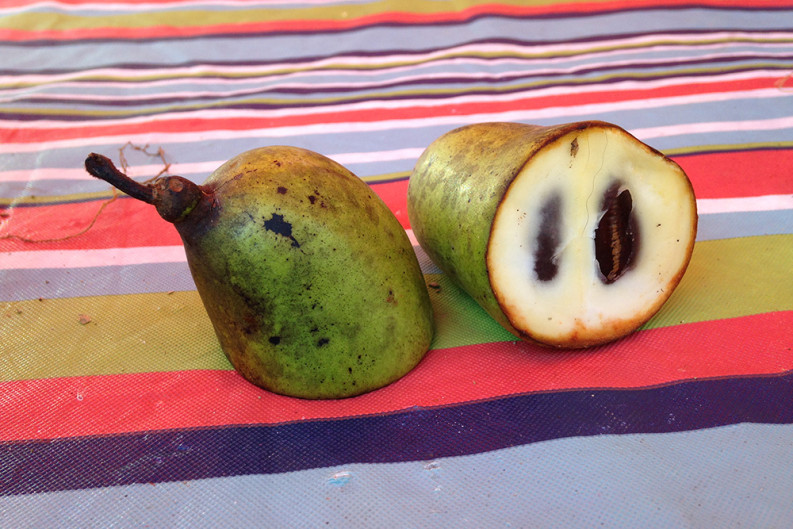 Remember that old folk song: “Pickin’ up pawpaws puttin’ ’em in your pocket, way down yonder in the pawpaw patch”?

Not a good idea, says Elizabeth Malayter, co-owner with her husband Jim of JEM Organic Farm near Rogersville.

“It’s like putting a ripe banana in your pocket,” she says. “You’d end up with a big smoosh!”

Malayter is selling wild pawpaws (aka the poor man’s banana), foraged from the woods on her property, at the Market Square Farmers’ Market one September morning. Displayed on her table in a basket of sunchokes is one pale green pawpaw, sliced in half, showing the creamy yellow pulp and large shiny brown seeds. The rare occurrence of a pawpaw at market creates a sensation among customers. One after another exclaim some variation of, “Is that a pawpaw? I’ve never seen one in the flesh/Haven’t seen one in years!” An older woman picks up half the pawpaw and inhales the scent. A young man wearing a deer antler necklace throws his arms wide as he talks up pawpaws’ nutritional content: “high in omega-3s.”

Moonshine. Heirloom tomatoes. Artisanal bacon. Now the pawpaw is emerging as a star of the locavore movement, an exciting rediscovery in Appalachian heritage food.

This August, Chelsea Green published Andrew Moore’s book subtitled with that same phrase: Pawpaw: In Search of America’s Forgotten Fruit. Green is best known as the publisher of fermentation expert Sandor Katz’s bestsellers, The Art of Fermentation and Wild Fermentation. In his review of Pawpaw, Katz writes that it “takes us on a … journey investigating how and why North America’s largest indigenous fruit largely disappeared, and documenting efforts to revive it.”

Why did pawpaws disappear from our tables? Thin-skinned and delicate, pawpaws bruise easily and do not keep well. At least partly due to its highly perishable nature, this once-common native fruit never appears on grocery store shelves. The taste is mild and sweet, with a spoony custard-like texture. If you want it, you have to forage it, a practice that disappeared from mainstream American culture with the rise of supermarkets.

This is the first year Malayter has sold pawpaws, but she often sells other foraged fruits and roots alongside the farm’s main livelihood, chicken and pork.

If Malayter can find enough pawpaws, she’ll sell them throughout the season, which is September through early October. She says Crabtree Farms in Chattanooga has planted a pawpaw orchard, still young, with plans to sell the fruit. In the next few years, pawpaws may become more available as part of the high-end local food movement.

Malayter plans to divide and transplant additional pawpaws around the edges of her woods in a loosely managed wild orchard. American Indians cultivated pawpaws in a similar way. An understory tree, they need shade to start, but some sun to fruit. Malayter says pawpaws are good forage for wildlife like raccoons and possums and she’s fine with leaving some for them.

On a recent expedition to Ijams Nature Center, I spotted hundreds of small pawpaw trees growing by the river, identified by their thin trunks, rangy habits, and large simple leaves. Not a single tree had fruit, perhaps picked clean by visitors and other critters.

The pawpaw tree I bought at Stanley’s Greenhouse and planted in my yard is a mango graft with a bushy, upright habit. Pawpaws need to cross-pollinate to produce, so I planted another young tree in the nearby Butterfly Meadow. Pawpaw leaves are the sole food of the caterpillar that morphs into the zebra swallowtail, a handsome black-and-white striped butterfly with a red tramp stamp marking its lower back. Sometimes called the pawpaw butterfly, the zebra swallowtail happens to be the official Tennessee state butterfly.

Mainstream America may have forgotten about these botanical gems, but they’ve been here the whole time, dropping luscious fruit, fulfilling an ecological niche, and supporting a state symbol, way down yonder in the pawpaw patch.