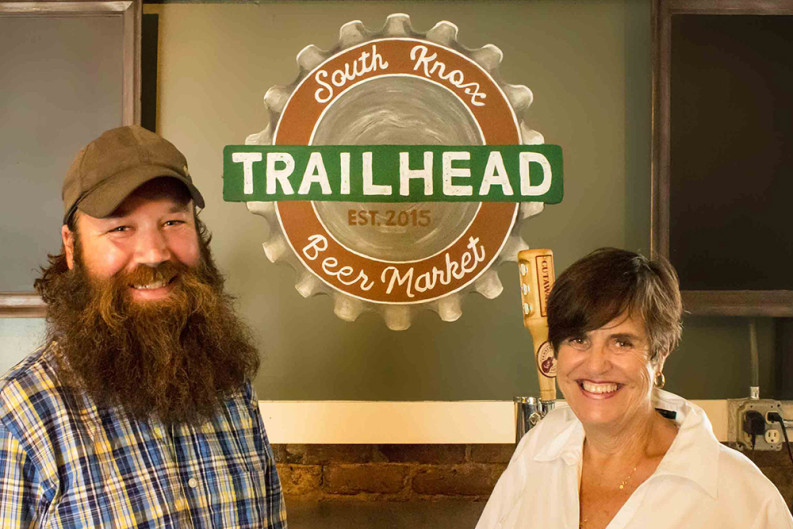 Kathy Wright and Joe Jennings are owners of the Trailhead Beer Market, which will have its grand opening Friday, Oct. 2, as one of the first businesses to open amid the south waterfront development. Located at 1317 Island Home Ave., a block from the Tennessee River, it will sell craft beer on and off premises and showcase the work of East Tennessee artisans.

What’s the draw of this location?
Jennings: The brand new Suttree Landing Park is going in right behind us and will have a public boat ramp. We are also on the front doorstep of the Urban Wilderness trails. Add in Mead’s Quarry and the river itself, and there is an obscenity of riches if you like anything outdoorsy—and people can pick up high-quality craft beer on their way to explore those things.
Wright: The concept is a neighborhood gathering place, community center, and watering hole for people who live in the area and for those enjoying Knoxville’s beautiful Urban Wilderness and Ijams Nature Center. Off-premise craft beer will be available to our neighbors heading home from work, as well as bicyclists and paddle boarders wanting a cold one with their picnic lunches.

How long have you been trying to get started?
Jennings: We leased this beautiful old building in April, just a couple of days after it became available, planning to open in July when the road work was advertised to be completed. We got the message in late June via a headline in the newspaper that the road work would continue through October. That was rather disappointing, but we used the extra time to do some remodeling.

What was the toughest part of waiting?
Wright: Waiting on the red tape. But the delay has allowed us to get to know the building and its history.  And it has allowed us to appreciate afternoons sitting under the tin roof on the patio listening to the rain drops.

How many beers are you choosing from?
Jennings: We’ll start with nine on tap and around 50 in cans and bottles. It is such an exciting time for craft-beer lovers in Knoxville. We are surrounded by so many good breweries, and over the past couple of years the city itself has really stepped up its game.  We have had the opportunity to meet representatives from a lot of the new East Tennessee brewers and sample their products. We will be considering lots of options and updating our beer lists regularly.

How will you define success the first month? Year?
Jennings: I’ve worked for three great local restaurateurs—Charlie Erickson, Randy Burleson, and Jenny Boyd. Each of them gives back to the community and cares about the neighborhoods they do business in. I’ve learned that more than turning a profit, you’re becoming part of something bigger than yourself. I think that involves a lot of listening to your clientele, so I’m looking forward to hearing what our neighbors want and enhancing what we offer based on that feedback. Success in a year? I’d love to see this corridor of Island Home Avenue and Sevier thriving with diverse businesses.

What’s your favorite artisan item that will be featured at the store?
Jennings: It’s too tough to choose only one. This place came together because of the local artists who contributed: Lauren Claiborne’s chalk mural, tables by Taylor Wallace, and a painting by Kathy’s daughter-in-law, Cory Wright, behind the bar. I think the most important artistic item was probably the logo designed by Karen Key. It kind of set the tone for everything else that followed.
Wright: We have a beautiful slab of tulip poplar that has been made into a table top that seats six. We are especially proud of it as the tulip poplar is the state tree of Tennessee. It was made by the very talented Jonathan Fryxell, who also made two table tops and a coffee table for us—we will be offering some of his designs for sale.

Do you have a future neighbor you’re particularly enthusiastic about?
Wright: We are delighted that Alliance Brewing Co., the Civil Air Patrol, and Three Bears Coffee Co. are going to be our neighbors as we begin the development of long-needed community gathering places in the area.

Are you outdoorsy?
Jennings: Yes, I used to hike the Urban Wilderness trails before it was known as the Urban Wilderness. We are all lucky to live in such a beautiful part of the country, and I make it a point to go out and enjoy it as much as possible, although with the brand new business taking all my time that may be a bit hard to accomplish for a while.
Wright: Yes, I am an avid hiker, a beginner level pickleball player, and I usually run 3 miles everyday with my dog Willow.

Would people feel out of place if they are not outdoorsy?
Jennings: This is definitely a new chapter for 1317 Island Home Ave. There have been a series of neighborhood bars at the location, which I patronized from time to time. This space is going to be very different: family friendly, dog friendly, and smoke-free, so I guess you’d feel out of place if you weren’t okay with that.
Wright: We are located on the soon-to-be “pretty side” of the river and we will make sure that everyone feels comfortable and welcome.

Is it hard to explain owning a beer market to your grandkids?
Wright: I am a proud mother of five and grandmother of five. My family is very excited about my participation in the development of this beautiful city. The kids are looking forward to writing on the kids chalk wall on our patio which also includes a beautiful map of the area.