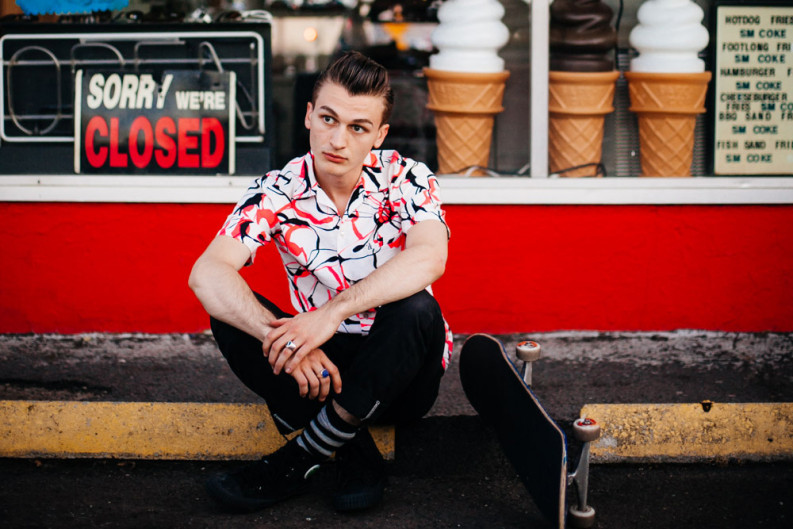 Cal Oaks has wanted to be a skateboard filmmaker since the age of 9, when he got his first camera for Christmas. That was just 10 years ago. He started out by recording miles of tape of his friends in action, traveling to skate parks throughout the Southeast, and hanging out at Pluto Sports, where he learned local skating lore from “the older cats that worked there.” Later, he graduated to a ’90s-era Sony VX1000 digital camcorder and started collecting Super 8 cameras. Now he’s got two skateboard films under his belt, plus support from a range of skate-centric corporate sponsors, from PF Flyers shoes to Bixby combs to Grant’s Golden pomade (which he uses—you may have noticed him as the rockabilly-cool barista at Old City Java). His new film, Terrarium, is premiering at Striped Light this Friday.

So why is your film called Terrarium?
I think the name comes from a combination of ideas and feelings. First of all, the South, and Knoxville in particular, is a humid gut of a place and not unlike a terrarium. We are surrounded by beauty—right in the middle of it all—but we are also loaded down with horrible pollution. I see the streets, the asphalt, concrete structures, and those patches of earth that work their way out of them as decorations in a terrarium. It is a thriving environment, but it is an environment I am stuck in, so I (we) utilize those intrusive structures to express ourselves.

Is it principally about the Knoxville skating scene?
Although I traveled around quite a bit during the production, shooting film and video in New York, San Francisco, San Diego, and Los Angeles, I wanted to make sure the video was centered in the South. It’s primarily shot in Knoxville with a few clips filmed in Nashville, Chattanooga, and Atlanta. Knoxville is home now, and it made more sense to me that it showcase Knoxville. The terrarium of Knoxville is a unique one in that the spots we skate are rough and gnarly, unlike the smooth concrete you might find on the West Coast or the endless “lines” you find in New York or Boston.

Who’s in it?
I guess because of age, work, and all the obstacles of life, it was difficult to get locals to commit for full parts like you might see in a traditional skateboarding video. Because of this, it is broken up into short montages and has a theme of day footage, dusk footage, and night footage, all separated accordingly. It worked out well this way. Several locals have clips, but I suppose the most featured are D.J. Griffis and Erik Phillips.

What do you want to show audiences with this film?
I aim to show audiences a unique approach on not only the skating in the film but also the filming and the layout of the whole video. I want to leave the kids that skate here something to inspire them to work with what they’ve got. Skateboarding in a small town is a struggle, but I’ve managed to work with what I have and constantly try to create something. I’d really hope to encourage kids now and kids in the future of Knoxville skateboarding to be able to watch my film and feel like they can go out and accomplish something just as rad!

This is your second film so far—how is it different from your first one?
My Generation, my first full-length, was shot all on a Sony VX 1000, which for years has been the industry standard for skate filmers. I love that camera and still shoot with it some today, but I wanted to try something different and take a new approach. My Generation also featured a lot more skaters and featured each skater in their own full part. Terrarium alludes to a certain narrative. I use that term loosely, because there is no narrative at all, really, but one gets the sense of story with this one. And where My Generation was shot on digital video, Terrarium is shot on DSLR and Super 8 film. One way both films are similar is that I’m not putting it straight on the Internet, and that’s pretty rare these days. I think it’s important to create something that is tangible. Everything is put straight on the Internet now and is forgotten in a heartbeat. There are a handful of filmers out there like myself that still believe in putting in the extra work to create something that has more meaning and will last in the underground skate culture. I direct, shoot, edit, and hand-package my own work—cradle to grave.

You’ve got some sponsors lined up—who are they, and how do they help?
Yes! I am truly blessed with all of the support I have received from the sponsors. Northern Co. is one of my favorite underground skate companies. I’m stoked to have them supporting my vid. Grant’s Golden brand is a pomade company that I’m a brand ambassador for, along with Thee Teen Aged, Richer Poorer, We Are Grits, the Sleeping Horse, and Bixby combs. Over the past year I have started to nurture relationships with many companies that are related to the skate industry. I believe in their product, and they believe in what I do, so it has been a great relationship thus far.

The local skate shop, Pluto, and the coffee shop I work at, Old City Java, are also supporting the film by donating goods to hand out. In fact, all of these companies have sent me product to toss out at the premiere and are also promoting my video via social media. Striped Light has been an amazing supporter also. Not only have they opened up their doors for this event and loaned me their press to print part of my disc package, but they are so ingrained in this community in the short time they’ve been here and really seem to want to make a real difference in Knoxville. Their vision to promote art and give people tools and resources they need to pursue things like that really gives me hope for this town.