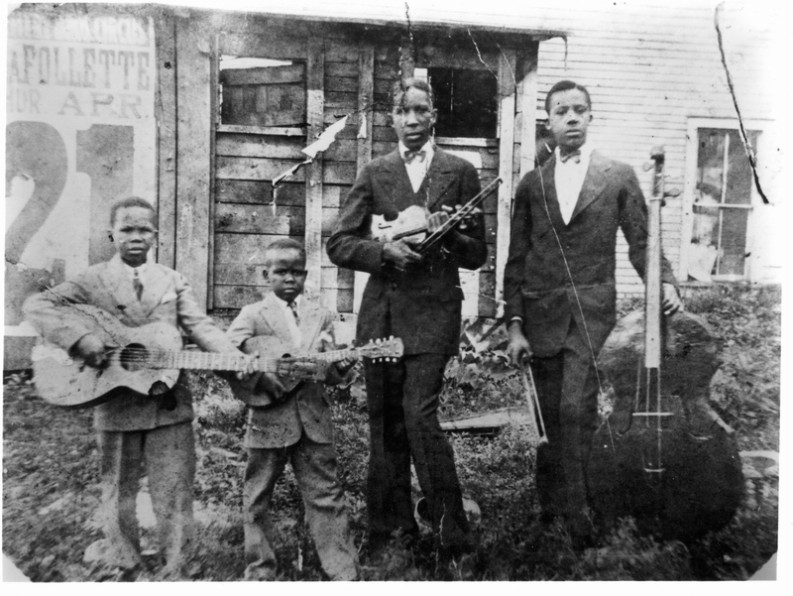 The annual Louie Bluie Festival is held each year at Cove Lake State Park, about 30 miles north of Knoxville off I-75, but it celebrates the legacy of a musician who kept things lively in downtown Knoxville in the 1920s and early ’30s.

Howard “Louie Bluie” Armstrong (1909-2003) was born in Dayton, Tenn., but grew up in LaFollette. His was a musical family, and he learned several instruments, favoring mandolin and fiddle. These instruments are today most often associated with country music, but Armstrong’s tastes went more toward blues and jazz. In the 1920s, the Armstrongs sometimes came to Knoxville to perform, on the streets and at least once on local radio station WROL, before that station was famously associated with country music and Cas Walker.

Howard Armstrong eventually moved to Knoxville, where he befriended several offbeat local musicians, especially a local blues guitarist with a distinctive style. Carl Martin (1906-1979) is usually associated with the Piedmont style of blues, which has vaudeville and ragtime influences and is more intricate and diverse than Mississippi Delta blues. Born in Virginia, Martin moved to Knoxville as a kid with his older brother, “Blind Roland” Martin, who was known as a fiddler. Carl Martin could play anything with strings, but was first known here as a wizard on the bowed bass.

Armstrong, who claimed he could play 22 instruments, found a worthy partner in Martin, and the two began playing together with various other instrumentalists, and even lived together in East Knoxville on Yeager Street, with other members of Martin’s family. Neither the house nor the street exists today, but their home was located in a densely populated neighborhood near the river, in an area now blanketed by James White Parkway.

With other musicians, they became known as the Tennessee Chocolate Drops. About 75 years later, that name later inspired the name of another band with a similar style, the Carolina Chocolate Drops.

They often performed informally in barber shops, pawn shops, and cafes up and down Vine Street, near what’s now the Old City. They were known for a style of jazz played on string instruments: guitar, fiddle, banjo, and mandolin.

In the 1920s and ’30s, musical styles were not as strictly defined as they are today. Many early “country” hits were actually blues, like Uncle Dave Macon’s “I’ve Got the Mourning Blues.” Banjos and fiddles were common in both black and white jazz combos in the 1920s. Several of Knoxville’s early “country” musicians, notably Chet Atkins, were strongly influenced by jazz guitar, especially that of French gypsy guitarist Django Reinhardt, whose recordings were available here in the 1930s.

In late 1929 and early 1930, the Tennessee Chocolate Drops made recordings for Brunswick at the St. James Hotel, on Wall Avenue near Market Square. Their recordings of “Vine Street Rag” and “Knox County Stomp” still exist, and are among the most interesting offerings of the Knoxville Sessions recording project, to be produced by Bear Family Records
of Germany in 2016.

Like many Southern blacks during the Depression, the Chocolate Drop members ended up in Chicago, where their eccentric form of blues was not always as instantly popular as the fact that Armstrong could sing the blues in Italian, which he’d learned from immigrant ironworkers in LaFollette. Armstrong could also sing in Yiddish, which he learned from Jewish merchants in Knoxville, and other languages that endeared him to Chicago’s ethnic neighborhoods.

The three reunited in their 60s, as a revivalist group called Martin, Bogan, and Armstrong, and made records, to much wider acclaim than they had enjoyed in their youth. After Martin’s death, Armstrong and Bogan returned to Knoxville to perform at the 1982 World’s Fair. In 1985, well-known documentarian Terry Zwigoff made a film about Howard Armstrong, called Louie Bluie, which was broadcast nationwide on PBS. A later film about Armstrong, Sweet Old Song, also got national exposure, in 2002. Armstrong returned to Knoxville occasionally in his 90s, once to perform a two-hour show at the Laurel Theatre.

Howard Armstrong, who began his career in music playing on the street before radio, lived into the Internet era, as a rare symbol of a time and place where country, jazz, and blues flowed together.

The Louie Bluie Festival, this Saturday from 10 a.m. to 7 p.m., celebrates the music and spirit of Howard Armstrong in Cove Lake State Park, not far from LaFollette, where he spent his childhood. Admission is free, but donations are encouraged.

Photo: Howard “Louie Bluie” Armstrong (center with fiddle) with his musical brothers, including bassist Roland, at right, around 1925.