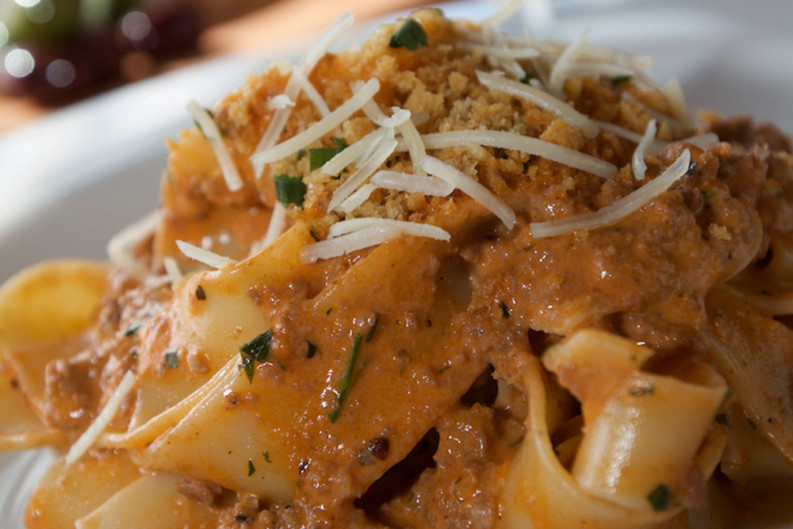 Between the indignities of ravioli in cans and ugly little cardboard trays of microwavable lasagna, there are few plagues that haven’t been visited upon the ancient and noble cuisine of Italy. Even in restaurants that ought to know better, heavy snowfalls of cheese and soft, pasty pasta remain erroneous icons of an Italian cuisine that isn’t very Italian.

Aside from a naturally peevish disposition toward culinary bamboozlements, I only mention these things because you should know that if your perception and appreciation of Italian food is based solely on Americanized versions in restaurants or from colorful jars of salty pasta sauce, the new menu at Knoxville UnCorked on Market Square may leave you wondering if That’s Italian.

This is not to say that the food is inaccessible, but chef Terri Roberts brings both a sincere stab at authenticity and a chefly sensibility to presentation, flavor, and portions that don’t conform to the traditional standards for “good Italian” that have long reigned in our city. You won’t find chicken Alfredo, not even spaghetti and meatballs; and sorry Garfield, there’s no lasagna or never-ending pasta bowls in sight.

What you will find is good food with a mix of mostly recognizable names all executed with skill. There are still some hiccups in service and an occasional misplay from the kitchen, but, overall, it’s a place to put on the must-eat-soon list.

The service issues are no worse than what you’d find in a hundred other Knoxville eateries on any given night. Still, I was disconcerted to have my food served from hands clad in blue latex gloves (though I was glad the lemons were being sliced under such hygienic conditions), and I remain amazed at how freely servers share gossip in such a public forum with so many unknown ears about.

I’ve eaten at UnCorked a number of times, and on several occasions the pasta sauces were curiously under-salted. It’s a better mishap than the opposite (and more common) mistake, I suppose, but one does hate to pick up the shaker. At times the bread service has been erratic—including one dinner where I wasn’t offered bread at all because, as I overheard, that perk was over for the night. And that’s a shame because it’s one of the best bread offerings I’ve had in a long time. It’s an immensely satisfying golden focaccia brushed with oil and salt and served delightfully warm with a little bowl of roasted garlic-infused oil.

It’s a beautiful addition to UnCorked’s offerings—but not as beautiful as the new pasta sauces, including a remarkably fresh and invigorating puttanesca served over linguine. The aroma—along with the sight of halved caper berries, little quarters of artichoke hearts, and delicate heads of tiny asparagus—won my allegiance before the first bite. All those elements, along with slivers of olive, contribute to the bowl’s nicely bright personality and mingle seamlessly with the very clean, clear flavors of fresh tomato.

The king of the pasta here, though, is the Bolognese; served with a pappardelle instead of the more traditional tagliatelle, it’s a home run. The thick, flat noodles are cooked nicely al dente, and the sauce is clearly the result of slow and low cooking, with layers and layers of flavor from multiple proteins including lamb, pork, beef, and pancetta. It’s a dish to smell, too—there are hints of spice; could it be mace? Cinnamon? Whatever it is, it adds a warming, even comforting element to the aroma that made me feel at home. Roberts sprinkles the dish with toasted, grated bread crumbs that are really quite amazing—the little bits of crunch and their toasty flavor contribute an entirely unexpected level of enjoyment and a very welcome lift to the bowlful of richness. 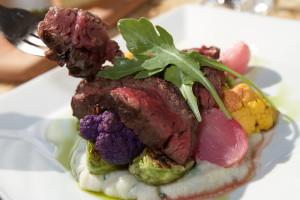 My favorite dish, however, is the Bistecca. Available at dinner, it’s the hands-down winner in my book, though it does ring in at a hefty tariff for hangar steak ($27). Still, I’d order it till my credit card melted. The dish is artfully composed in a way that enhances the eating of it. This cut from the diaphragm area is best enjoyed when sliced across the grain—Roberts does that for us instead of assigning servers the laborious and often condescending task of telling us how to eat our food. And don’t specify your temperature, please—let them cook it as it ought to be cooked, about medium rare. That’s the sweet spot for this cut’s tenderness. What really elevates the dish is the accompaniment of epiphanous butter-braised radishes and roasted cauliflower—a duet of nearly ethereal harmony.

The radishes grabbed my attention first, and they warranted it; succulent and full of earthy, buttery flavor, I could eat a whole bowl. Likewise, the golden roasted florets of cauliflower sitting atop a cauliflower puree—the nutty, roasted flavor of the florets contrasting the earthy, ever so slightly sweet puree—made a magnificent and wholly unexpected complement to the protein. Honestly, that combination made me speak aloud to my maker. There were also some unfortunate Brussels sprouts on the plate—I’m a big fan of those sprouts, but here they were all elbows in an otherwise graceful dance. It’s easy to push them aside, but, given the harmony (and expense) of this dish, I was more than a little disappointed; but not so much that I wouldn’t order it again. And again.

If you’re an appetizer lover, it’s hard to go wrong with any number of choices, though I’m a particular fan of the truffled cannellini bean dip that’s served with the most attractively grilled, perfectly crunchy pita I’ve ever seen. Roberts doesn’t hit us over the head with truffle oil—so she’s being delicate or, hopefully, using real truffle oil instead of the intense impostor version that’s common on many menus. It’s a very satisfying start that’s easy to overeat. 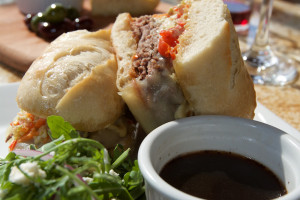 The menu is filled with good things, including a superlative Italian beef sandwich served with a jus for dipping—or slurping in my case. A more sub-like Italian sandwich is meaty and satisfying with a gratifying and tangy kick from house-made giardiniera and Calabrian peppers. Roberts’ revised version of truffled wild mushroom pasta is a vast improvement over what was once served here under that name.

Dessert service continues to evolve, so there’s no telling what you’ll get to try. But do try it. In an early visit I enjoyed a peach ricotta cake that was so moist and dense that I put down the fork and used a spoon to catch it all—especially the pools of vanilla crème. That sauce created some recollections of intensely flavored shortcake. There was basil oil on the plate, too; it added a unique, appealing flavor, at once sweet and savory, that was supposed to complement a garnish of tiny basil leaves. On my visit, the kitchen was out of micro-basil and, so, substituted micro-chervil. It was still interesting, and I would order it again but without the chervil.

More recently I enjoyed a chocolate budino—it’s like a lava cake, but I prefer to think of it as the ultimate pudding cake. Rich chocolate pudding hides inside a tender chocolate cake shell that’s draped with warm chocolate sauce. That’s really all I have to say about that.

I understand that longtime fans of the restaurant have been disappointed by some of the changes. But, for me, the allure of the place had long faded, so the alterations are happy news and, all in all, a tasty success. Heck, properly cooked pasta is a major achievement all on its own. And that is Italian.