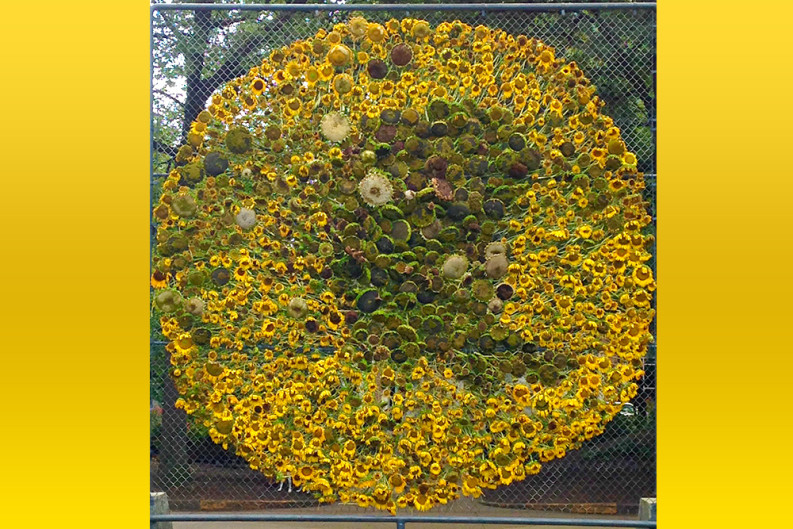 At the west end of the grassy rectangle of the Krutch Park extension, a 15-foot-tall circle of sunflowers woven onto chain-link substrate looms like an enormous organic parade float. Within the yellow ring, a shape outlined in darker flower heads could be a boot. The back of the piece is just as interesting, the thick interlacing stems holding fast without string or wire. Two businesswomen take photos in front of the piece, fussing about the mud on their high heels. Their friend walks over. “Did you find out what that is?” he asks.

“That” is the completed sculpture installed during the Labor Day Sunflower Project community ceremony in which people brought their own sunflowers from home to weave onto the fence. All morning, participants (100-150 in all, project organizer Gerry Moll estimates) trickled by with sunflowers to add to the art project. The weaving process was accompanied by a sunflower-themed performance by Cattywampus Puppet Council, as well as music by Kelle Jolly and the percussion group Bateria Appalachia. A potluck and speeches by Jobs With Justice labor activists concluded the 8th annual LDSP event. The highly visible—and audible—ceremony is a celebration of work and the defining event of the Labor Day Sunflower Project. After the ceremony, the cycle of work begins again.

Now the LDSP folks are busy with other, lower-profile sunflower endeavors. Moll and a crew of volunteers dismantled the art piece after a few days, piling the sunflower heads on blankets. On Nov. 6, 7-10 p.m., the Birdhouse 4th and Gill Community Center will host a winnowing party with a potluck, bonfire, keg, and live music.

The traditional winnowing process has a cinematic visual poetry. If the day is warm and windy, members of the winnowing party will gather around a blanket spread on the grass. The heads of the laboring party cluster around the pile of dry sunflower heads mimicking the structure of the inflorescence—the single head of the sunflower composed of a cluster of tiny flowers. The best way to remove the seeds, Moll says, is to rub two flower heads together and let the seeds drop onto the blanket. When enough seeds are collected, each person grasps an edge of the blanket, throwing the seeds into the air like children tossing a toy parachute. The wind blows away the dried petals and debris, while the heavier seeds fall back safely into the sheet. Or, if there is no wind, several electric fans should do the job.

The clean seeds are packaged in paper envelopes and given away as party favors, or saved to be sold to fund next year’s project. These seeds are a mixture—a grab bag of sunflower varieties from individual home gardens.

Off a curvy country road in East Knox County lies the LDSP Landrace Heritage Sunflower Patch. This 9-foot by 20-foot fenced garden plot bursts with yellow Seneca sunflowers. “Landrace” refers to any ancient crop native to a particular area and domesticated by the inhabitants. Branching wild sunflowers with many relatively small heads are native to North America, while the domestic sunflower is a single flower head atop a tall thick stem. Four years ago, Josh Bremseth, an early LDSP operative, wrote the National Center for Germplasm Preservation asking for heritage sunflower seeds. The center gave him 47. The Seneca patch is now in its fourth year of growing out, and the number of seeds has grown exponentially. The patch is isolated from contemporary cultivars to prevent cross pollination, and Moll says these seeds will be winnowed separately.

In the 1990s, paleoenthnobotanist Gary Crites found the earliest evidence of domesticated sunflowers at the Hayes archaeological site in Middle Tennessee. Radiocarbon dating suggests prehistoric North Americans domesticated the sunflower as a food crop over 4,000 years ago. Crites, who happens to be director of paleoethnobotany at the University of Tennessee’s McClung Museum of Natural History and Culture, was lurking in the audience during a recent event in which Moll spoke about the Labor Day Sunflower Project. Crites approached Moll afterward, with valuable pointers and information on prehistoric sunflowers.

At the heritage patch, heavy heads and fading petals say it is time to harvest soon. In reality, these Seneca sunflowers are no longer a food crop. With all today’s available alternatives, it is too much trouble to harvest, winnow, and shell for a tiny nugget of sunflower meat. Why do heritage crops matter? A paleoethnobotanist might say they matter now because they mattered then, to ancient people who shaped the environment slowly.

“From a scientific standpoint, these crops are perfectly suited to being here, so its strengthens the ecosystem. Insects co-evolved with heritage plants, and on up [the food chain]. It takes the base out of the ecosystem when you don’t have these native or heritage plants,” Moll says.

Moll is also a member of the Plant Rescue Squad—a team that digs up and transplants special native plants threatened by development.

“For me, [preserving] heritage plants is about building identity and creating a sense of place, a connection. Being tuned in and having a special relationship with plants in this area leads to being good caretakers of the land,” Moll says. “The more diverse an ecosystem, the stronger it is.”