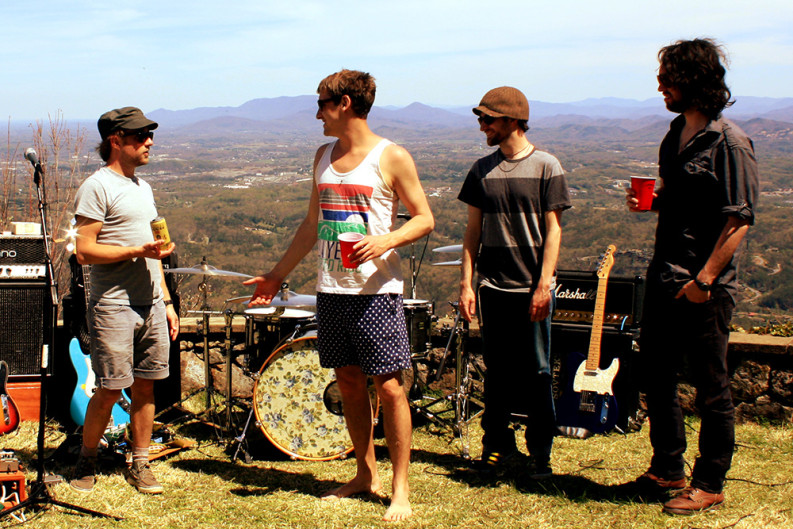 The members of Knoxville’s Gamenight have never taken themselves too seriously, but that doesn’t mean they don’t make serious music. Their 2013 full-length release, Pets Pets, is as smartly crafted and well-recorded an album as you’re liable to find from a group of post-collegiate indie-rock millennials, working unsupervised without the tether of even a small record deal.

According to singer-guitarist Joshua Manis, he and his bandmates harbored the same biggish dreams as most other fledgling rock outfits of like description and demographics. But they had equal measures of perspective to balance the loftier aspirations.

“The end goal was to ‘get noticed,’” says Manis, seated in Remedy Coffee in the Old City. “But at the same time, we just wanted to make music we liked and we enjoyed hanging out and playing.”

Gamenight was founded in 2005 by Manis and his brother, Brandon, from the ashes of another outfit they’d played in circa their late teens. Their earliest visions were of the road and living the life of rock ’n’ roll road warriors.

“Our first goal was just to get something out we could take on tour,” Manis says. “We just wanted to tour as much as we could while we were young.”

It worked out, at times, in the form of frequent weekend trips, and a few longer jaunts here and there. The highlight was a six-week cross-country trek in 2007, out to California, then to New York and back. “That was a blast,” Manis says.

Recording has been sparser. Gamenight issued their first platter, 2006’s Simple Starts in the Mind, within a few months of their founding. Record number two­—the aforementioned Pets—took considerably longer.

To be sure, there have been other, shorter releases—some singles, a split EP, and a couple of toss-off holiday releases titled Gamenight Ruins Christmas. But until the band puts out another proper album—and Manis says a third full-length is on the way—Pets is their magnum opus.

And that’s not a bad thing. Pets Pets is a fine record, better than a scruffy former Fort Sanders four-piece band with only one full album behind them had any right to make. Full of chiming, cleverly orchestrated guitars, elaborate song structures, and warm, open-hearted vocals that somehow never sound treacly, Pets is redolent of ’90s indie-rock influences.

One of those is another scruffy former four-piece Fort Sanders band, Superdrag, who were similarly fond of punchy six-strings and emotive vocals, and who were likewise better than they had any right to be.

“Yeah, I loved me some Superdrag,” Manis admits with a slightly sheepish chuckle. “They were a big influence early on. My goal then was to craft songs as well as John Davis.”

If he’s not there yet, he’s certainly getting closer. Gamenight manage to balance strong pop instincts with a penchant for the occasional musical curveball—loopy riffs, tempo and time signature changes. If the change-ups came in a little faster, a little more often, Gamenight’s music might almost qualify as prog pop. But Manis says the band has learned to rein in their more experimental instincts without losing the added spice.

“We’ve always enjoyed mixing it up. We’ve never been a straight verse-chorus-verse type of band,” he says. “But I think on our earlier songs, we were sometimes trying to be too ‘showy.’ With Pets Pets, we started to craft more complete songs.”

That continues with the newest songs in the Gamenight till; Manis hopes the band will be ready to record a third record in early spring. He says of the new material, “It’s not soul, but a lot of it is more soulful. There are a couple of songs that sound almost Motown-ish. Of course, when we play it, we don’t sound anything like a soul band, but you can hear those rhythms in there.”

Manis cedes that Gamenight doesn’t hit the road much anymore, opting for mostly local shows, and only the occasional out-of-town trip. “We’re older now,” says Manis, who recently turned 30. “We have more responsibilities.

“We’d still like something bigger, but sometimes life gets in the way. We’re all pretty content just writing and putting out albums when we can, doing it as it comes. As long as we make enough to do the next one, we’re happy.”