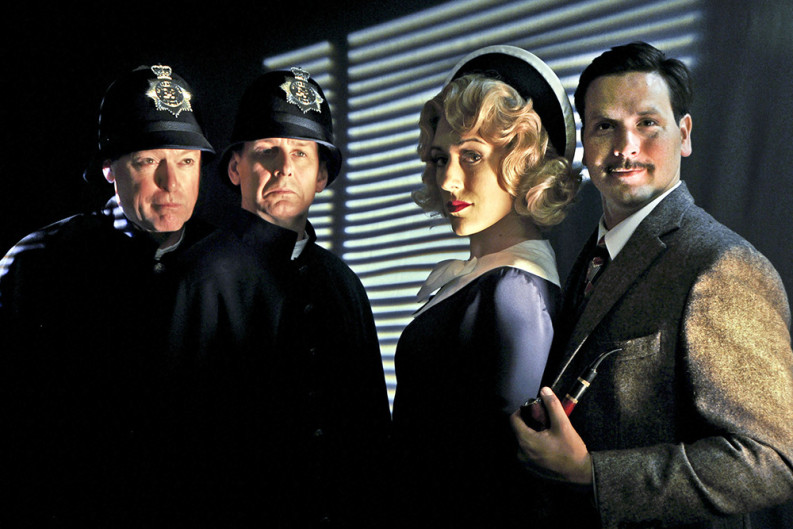 The late Ralph Allen, chairman of the theater department at the University of Tennessee from 1972 to 1978 and a founder of the Clarence Brown Theatre Company, was known to claim, quite professorially, that all great drama reveals universal truths. Somewhat ironically, though, Allen was also a specialist in the less esoteric theatrical field of American burlesque comedy routines. Allen went on to mold his collection—certainly sans universal truths—into the Broadway musical revue Sugar Babies, which starred Mickey Rooney and tap dancer Ann Miller.

Similarly, one would probably be hard pressed to find universal truths lurking in the latest Clarence Brown Theatre production, The 39 Steps—but that is its unabashed beauty. This production, which opened last week and runs through Sept. 27, is pure entertainment gold, simultaneously smart, intricate, and satisfying.

Bestowed with clever stylishness and a breathless energy by director Kate Buckley of the UT theater faculty, CBT’s The 39 Steps is the take-off adaptation by Patrick Barlow (from an idea by Nobby Dimon and Simon Corble) of John Buchan’s novel and Alfred Hitchcock’s notable 1935 espionage thriller. The fun in Barlow’s adaptation is that the intricacy of the spy story becomes a comic parody, done mostly for outright laughs in faux seriousness, in which one actor plays the falsely accused, on-the-lam protagonist Richard Hannay, while three other actors portray everyone else—the three leading women plus the dizzying and uncountable collection of spies, double agents, newsboys, milkmen, Scotsmen, innkeepers, wives of innkeepers, policemen, and railway passengers, not to mention the sadly burdened Mr. Memory. Dizzying, too—and comical in their absurdity—are the rapid-fire costume changes, along with the sound effects, vaudeville-esque props, and minimally suggestive set pieces required to pull off the concept.

Such a concept, though, requires actors who can master the special blend of acrobatic comedy and parodied demeanor. Brian Gligor was excellent as the handsome and stylish but hapless Hannay, who goes to the theater and finds a mystery that takes him from London to Scotland and back. Hannay crosses paths with a collection of romantically inclined women: a mysterious foreign agent, Annabella Schmidt; Pamela, a Hitchcockian railway passenger; and Margaret, a looking-for-love farmer’s wife. All are played with appropriate poise, delivery, and dexterity by Katie Cunningham.

Playing literally every other character on stage are CBT regulars David Brian Alley and David Kortemeier. The two possess the brilliant comic timing and inventiveness necessary to weave theatrical magic from the continuous character and scene shifts. One amazing scene in particular involves a split-second hat-changing sequence of character differentiation by the pair that simply defies description.

Comic references to Hitchcock films also find their way into the play, mostly by way of projections or set pieces—the crop-dusting scene from North by Northwest, a knifing music effect from Psycho, an escape out of Rear Window, and a girder-dangling reference to Vertigo. In fact, the production’s entire scenic enclosure, designed by Nevena Prodanovic, is a Hitchcock reference: an attractive brick-wall British movie soundstage, complete with heavy roll-away doors that act as a show curtain. Substantial contributions to the show’s rhythm, energy, and quasi-film noir style—not to mention an impressive chase scene—came from a crisply evocative lighting design by Jaymi Lee Smith. Bill Black’s costume design also had to support a 1930s British look, but carried the additional requirement of facilitating the many fast changes for Alley and Kortemeier. The absolutely essential music and sound effects came from CBT’s Joe Payne.

The fun of CBT’s The 39 Steps lies in accepting the theatrically stylized illusions that carry the story along. One simply must laugh at the absurdity of an impossibly oversized sandwich, believe that a few boxes are a railway compartment, and buy that four actors can turn into a hundred before your eyes. Theater, after all, is illusion. And that’s a universal truth.

The 39 Steps runs through Sept. 27 at Clarence Brown Theatre.