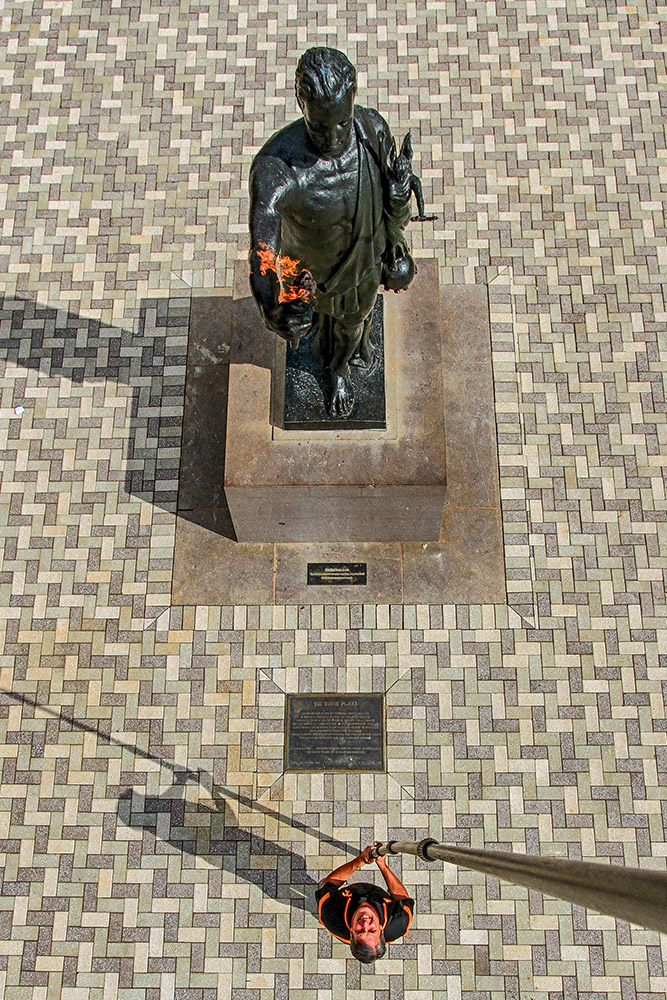 Bruce McCamish draws second glances when he’s raising an expensive camera several fathoms above his head on a busy downtown street corner. The slender telescoping pole he uses was actually designed for house painters, not photographers—and when it’s fully extended, with that big camera swaying on top, it looks like a fantasy contraption in a Dr. Seuss story.

He can control some things from the ground, like when to snap the picture, by a remote-control device. But he can’t get a good look at the exposure he just snapped until it’s back down.

“Every time I send the camera up, it’s Christmas,” he says. He never knows what he’s going to get. Often it’s as surprising as any Christmas gift. “My goal is to shoot something, every day, from an angle you’ve never seen before.”

This is how the photographer gets our attention: not from this bit of performance art on the sidewalk, but from what results in that little black box up there. McCamish has been taking pictures as a hobby for more than 40 years, and professionally for more than a decade, but only recently have his arresting images drawn fans, as evidenced by vigorous sharing on social media, use of his work by some prominent institutions, and a recent public show of his work as art, with more to come in the near future. Some viewers are convinced his images of familiar places are manipulated through some computer wizardry. But he’s just showing us our familiar world from an unexpected angle, a point of view we’ve never experienced before. He makes it work with some imagination, some big lenses, a good camera—and this long fiberglass pole.

There’s some hazard in his technique. McCamish admits he smashes a couple of lenses a year. To him, it’s part of the thrill. And he never questions whether it’s worth the extra trouble and expense. It’s all to get the point of view you’ve never seen.

You might guess he’s a good deal younger than 51. That’s true for a lot of people who make a living doing what they love. McCamish seems just now to be settling into his life’s work. Raised in the Holston Hills area, he was always interested in photography, but mainly just as a hobby, from when he was 7 and had his first Kodak Instamatic. His father worked for Panorama, a picture-heavy local magazine, and he thinks that helped convince him that some people make a living in photography. But he was a forestry major at the University of Tennessee, and after graduation, tried to avoid anything that seemed like work. For seven years he worked as a golf pro at River Islands Golf Club at Kodak.

He later began helping his brother, Joe McCamish, with real-estate promotions, and unexpectedly, in middle age, he found his true calling. He started experimenting with perspective, to get a better angle on a house. For a while, he’d found a useful technique: a homemade 14-foot blimp. On a tether, it could go as high as 400 feet, and he got some great shots from it. But the 2011 hailstorm ruined it. He could have rebuilt it, but he sounds happy to be past his personal blimp era. “It was a glorified beach ball,” he says, that was always leaking helium, even when it wasn’t hailing. “And since then, the price of helium has skyrocketed.”

He also tried the latest craze, the personal drone. But the Federal Aviation Administration’s regulations have all but banned them for commercial use. “FAA regulations are so squirrelly, I don’t even touch them,” he says.

So, he’s got the 30-foot fiberglass painter’s pole. And using that pole has gotten him a lot of public attention as an unconventional photographer. He’s been exhibiting only recently. He got a First Friday show at the Arcade Building on Gay Street in August. There will be another in October. His work has been used by Visit Knoxville and Knox Heritage.

McCamish’s work has been much-shared on social media—one shot of Knoxville, from a pole held on the bluffs across the river, with an 800-milimeter lens, astonishes almost everyone who sees it, convincing some it must be a collage of some sort. But it was one shot. That lens, he says, compresses everything into one place.

“I’m a real-estate photographer to pay the bills,” he says. “I do this other stuff for fun.”

He uses his pole technique to take real-estate shots, and admits he’s gotten some complaints that a suburban house doesn’t look as good from the ground as it does in his photographs.

McCamish also travels around the country taking pictures, and loves Alaska and Montana, but two of his favorite subjects are closer at hand. The Smoky Mountains is one, and his extraordinary shots suggest he has solved the problem Ansel Adams had when he tried to shoot the Smokies in the ’30s—partly because they’re so densely wooded, Adams couldn’t find a good way to get perspective on them. He didn’t try a 30-foot painter’s pole.

McCamish is an admirer of Jim Thompson, the Smokies park pioneer remembered as the father of modern photography in Knoxville. One of McCamish’s own favorite shots is of Mount LeConte, taken unintentionally from a nearly identical perspective to a famous one taken in the ’30s by Thompson.

McCamish’s other favorite subject is downtown Knoxville, with its own interesting topography in glass, steel, concrete, and brick. Last weekend, he was on top of UT’s Thompson Boling Arena shooting the final Boomsday.

“We take it for granted, but I just love Knoxville,” he says. “I’ve lived here my entire life, and this is the best it’s ever been.”

Today, he’s on the corner of Gay and Clinch, standing beneath his swaying painter’s pole with an expensive Canon 7D way up there at the top, holding a remote-control clicker, shooting the Burwell Building. He’s not sure what it will look like, but if it’s like most of McCamish’s work, it will look different from any picture you’ve ever seen.

“If we were 20 feet tall, the world would be much more magnificent than we can imagine,” he says.

So much is just a matter of how you look at it. 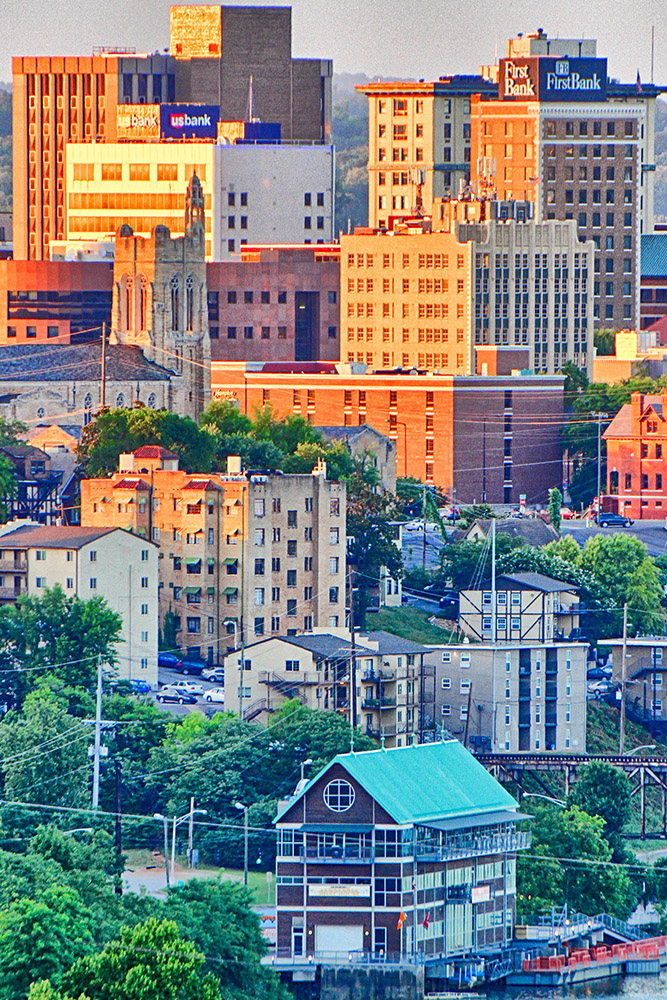