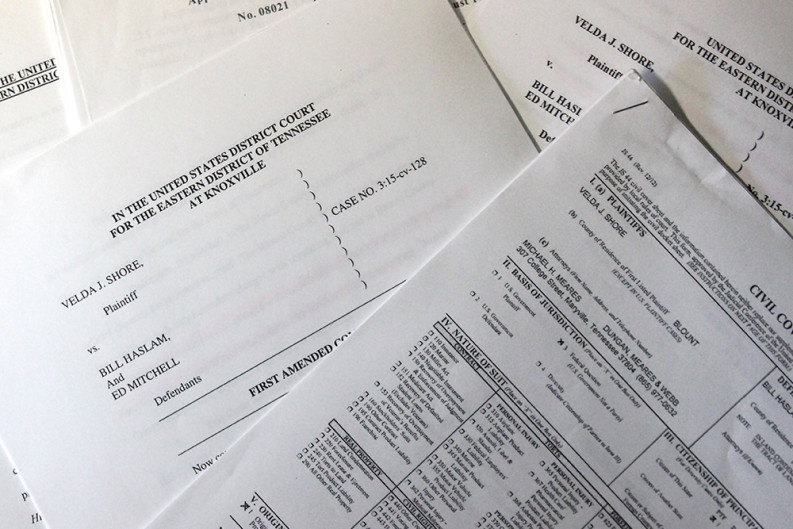 An 86-year-old grandmother in Blount County is suing Gov. Bill Haslam over updates to a state law she says were passed to slight her and benefit her neighbor, a farmer who likes to throw concerts and other events on his 225-acre plot next to her home.

Velda J. Shore, of Greenback, filed a federal lawsuit earlier this year against the governor and Blount County Mayor Ed Mitchell challenging the constitutionality of updates made last year to Tennessee’s Right to Farm Act. Tweaks to the decades-old bill—which, in part, shields farmers and farm lands from local zoning and land use regulations—essentially redefined the state’s definition of agriculture to more broadly include entertainment such as concerts, festivals, and pretty much anything else fun that could earn a farmer an extra buck or two.

Essentially, the new wording makes it nearly impossible to challenge a farmer’s decision to throw down on his or her land since entertainment activities, by legal definition, could not be considered a nuisance under Tennessee law—provided, of course, the property was primarily used for farming. But Shore contends the law is far too broad, opening the door for everything from rock concerts to motorcycle races on lands meant for corn stalks and cow pastures, while taking away ordinary folks’ rights to property and due process.

“I just want the rights of the people given back to us, where we have the right to seek justice,” Shore says. “At this point, we have none. You can’t go to a (zoning) board for a hearing, or go to the courts and file a lawsuit (over these types of things)—the new law doesn’t allow nuisance lawsuits.”

The state is challenging those assertions and petitioning the federal court in the East District of Tennessee to toss out the suit, saying the governor himself shouldn’t be named in a lawsuit challenging state legislation even if he was the one who signed it into law. It could be several more months before a judge makes a decision to either hear or dismiss the case. A spokesperson for the Tennessee Attorney General’s Office, Harlow Sumerford, declined to discuss specifics about the case, but said he believed the law was constitutional and the governor shouldn’t be facing a lawsuit over it. Attorney Craig Garrett, representing Blount County, did not return calls.

Cole Swindell performed during the opening date of the 2014 Luke Bryan Farm Tour at Maple Lane Farms in Greenback.

Maple Lane Farms owner Bob Schmidt is already counting the updates to Tennessee’s Right to Farm Act as a victory, and one he hopes holds out. For more than seven years now he has been embroiled in an ongoing lawsuit with Shore, fighting for a right to host concerts and festivals that he says help make ends meet on his family’s farm next to her home.

“The face of agriculture has been changing constantly. It’s changed more the past five years than it has in the past 20, and in the past 20 it’s changed more than it has in the last 100,” says Schmidt, who purchased the farm back in 1985, years before Shore moved in next door. “We’re constantly having to reach out and embrace new ideas to help pay the mortgage. This agritourism thing was a natural fit.”

Schmidt isn’t named in the federal lawsuit, but the twists and turns of his storied court battle with Shore laid the groundwork for its filing. After the Tennessee Supreme Court sided with Shore last year, overturning two lower courts’ rulings, Schmidt and lobbyists petitioned state legislators to change state law to specifically include entertainment under protections for farmers.

“The Legislature at the urging of the Farm Bureau and the [sic] Mr. Schmidt made this change to the definition of agriculture to try to help farmers such as Mr. Schmidt be able to make a living in today’s environment through farming,” an April 2014 letter from Schmidt’s attorney, Melanie Davis, reads. “This action was done in response to the Supreme Court ruling…”

Sen. Mark Norris, R-Collierville, even referenced the case when introducing his bill, 2014’s SB 1614, to a subcommittee last year. But Schmidt credits the Farm Bureau lobby for pushing for the changes, saying he doesn’t have much, if any, pull at the capitol. He says he’s just trying to make ends meet in a tough economy, while Shore argues she fought hard for this legal victory just to have politicians step in and snatch it away.

The entire dispute started in 2007 when Shore filed a complaint with the Blount County Commission over the increasing number of concerts and other events, including festivals and helicopter rides, being held at Maple Lane Farms. The farm had become well known for its annual fall festival, which features a hayride and corn maze of different design each year, and expanded with other shows and events from 2006 to 2008, according to records. Shore equated it to “living close to another ‘Dollywood,’” and several other neighbors would later testify to noise issues. Building Commissioner Roger Fields told Schmidt in a letter that the corn maze was a-okay with the county, but the music shows and helicopter rides would have to stop. Schmidt appealed, and in Jan. 2008 the local Board of Zoning Appeals voted 3-2 against him, ruling concerts were “not being supportive of agricultural use” and limiting Maple Lane Farms to just one music performance annually.

But, according to Schmidt’s lawyer, that ruling didn’t apply since farms were exempt from county zoning and nuisance rules under the state’s Right to Farm Act, a 1982 bill designed to protect the interests of farmers as many urban areas around the state continued to expand and threaten traditionally rural environs with development.

Shore filed a lawsuit in Blount County Chancery Court shortly after, in early 2008. That legal battle stretched out for years until a judge dismissed it in 2011 over a technicality: Schmidt’s mother, part owner of the farm, had not been named in the lawsuit, thus it couldn’t proceed to trial. Shore protested, taking the case to the Blount County Court of Appeals, then on to the state Supreme Court after losing that appeal.

In Aug. 2013, the Tennessee Supreme Court ruled that concerts weren’t farming, thus festivals and other non-farming events happening on farms were, in fact, subject to local zoning ordinances and the rule of law. The case was sent back down to Blount County court for further proceedings, where it’s still ongoing, though it may be doomed if the federal case fails and the state’s new definition of farming holds.

Shore remains suspicious that she won’t get a fair shake in Blount County. She has alleged intimidation and cronyism, filing an ethics complaint against the judge that, until recently, had been overseeing her civil case. Judge Telford Forgerty Jr. recused himself earlier this month. Turns out his brother, Rep. John Forgerty, served on Tennessee committees for agriculture from 2011 through 2014.

Meanwhile, Maple Lane Farms is gearing up for another fall of events. Its 10-acre corn maze opens this weekend, and country star Luke Bryan is scheduled to return for a show on Oct. 2.