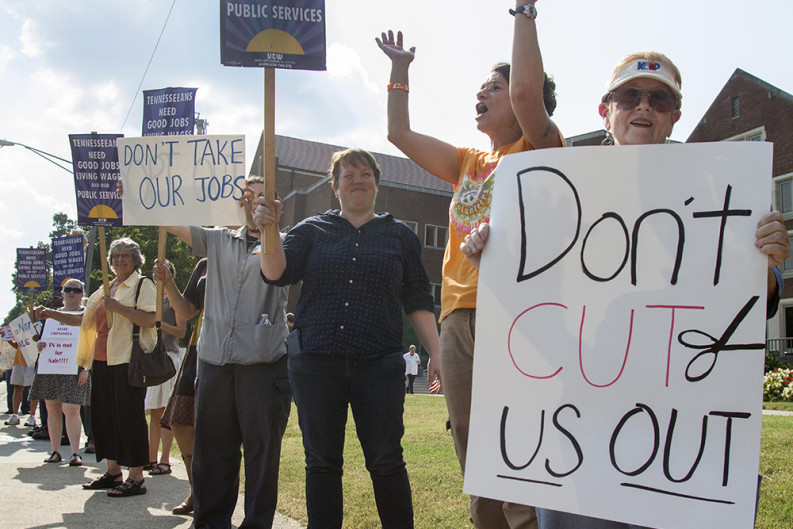 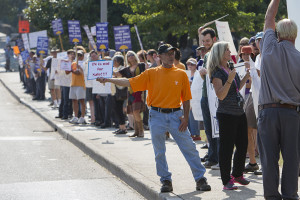 Clutching a sign that reads “TN is not for sale!”, India McAfee stepped into a line with 150 or so other people picketing along Cumberland Avenue Thursday afternoon. He joined chants directed at passing motorists—“Hey Haslam, step off it! Put people over profit!”—fishing for a few honks in support of people like himself, University of Tennessee employees who fear they will lose their jobs under a new proposal from Gov. Bill Haslam looking to outsource building operations and maintenance for many state agencies, including the university system.

UT workers and supporters took up positions at both ends of the Strip, one group in front of the College of Law and another by the Pilot gas station, voicing opposition to changes organizers say could affect more than 1,000 jobs at UT Knoxville alone—and that’s not including other state offices with local operations that may be handed over to a contractor with the lowest bid. Two guys still wearing their gray maintenance uniforms held up a banner that has Haslam’s head superimposed on the body of Miley Cyrus, riding a wrecking ball. It read: “Haslam – tearing UT down brick by brick.”

For McAfee, the threat of being laid off from a state job once thought to be secure is nothing new. He joined the UT Facilities Services staff just two years ago after losing a maintenance gig at Lakeshore Mental Health Institute, which was shuttered in 2012 as the state shifted some mental health services to private contractors.

“I have 11 years with the state under my belt, and it’s hard looking at going through another layoff phase,” says McAfee, 42. “I need a job.”

Tom Anderson has tended to the UT campus for more than 14 years. He says the school, its students, and, ultimately, the community will suffer if their jobs are outsourced. Nobody knows the ins-and-outs of the university, or what it takes to keep it running, like he and the other staffers do, and contracting with an outside company could siphon off money away from the local economy, he says. 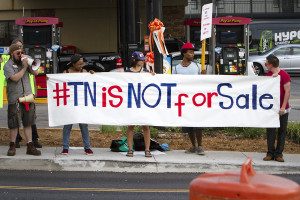 “This plan sucks, to put it succinctly,” says Anderson, a buyer with Facilities Services who helped organize this public protest in conjunction with United Campus Workers, a union representing more than 1,600 higher education employees across the state. “We’re all really dedicated to the university. We’re like a close-knit family, and we’ve had families working here for generations.”

Speculation over what might become of several thousand state jobs has incensed public employees and supporters in recent weeks as reports surfaced of a sweeping proposal to privatize the management of a still-unknown number of buildings and support services currently being run by the state of Tennessee. Those plans first came to light after the Department of General Services posted a request for information, or RFI, online Aug. 10 seeking responses from companies that might be capable of taking on the broad swath of work, covering 19 types of positions from food operations to providing security and emergency preparedness for many state agency buildings, including colleges and universities, state parks, prisons, and others. An RFI is the first step in the bidding process that may or may not end in a contract being issued for the work, though state officials say it’s no indication of the final scope for a contract or even if it will move forward. Calls and emails seeking comment from the governor’s office were not returned.

Adding fodder to the fire, a recently leaked timeline seems to put those plans on the fast track, with a target date of Aug. 1, 2016 for a contractor to take over those responsibilities following a competitive bidding process.

“This is merely gathering information to see what vendors are out there. The state in the past has outsourced facility management, the operations of certain general government buildings, and this is just looking at the possibility of expanding that further,” says General Services spokesman David Roberson. “The RFI is written as broadly as possible to cover all the different types of property the state owns, but it doesn’t mean the state is going to write a contract for all of those.”

The state in 2012 outsourced management of some facilities to Jones Lang LaSalle, a commercial real-estate firm out of Chicago, in a deal that would later come under fire by state auditors after the contract was amended and expanded from $1 million to more than $10 million without any rebidding process. A 2013 audit report also highlighted potential conflicts of interests where JLL stands to benefits from recommendations it could make to the state, specifically related to signing bonuses for building leases.

While it’s impossible to know what may happen if this most recent bid to outsource more public jobs and state responsibilities goes through (or even if it will, for that matter), the privatization of government services isn’t exactly a new phenomena. Other municipalities, from small cities to the federal government, have dabbled—or, in some cases, plunged—into public-private partnerships in recent decades with varying results. Haslam contends that privatizing some state services will save money and improve services, while critics say any savings would come of the backs off employees in reduced wages and benefits. Tennessee may be the first state to look at literally handing over the keys to a private company, but there is a breadth of research and case studies out there that show outsourcing can be a mixed bag.

Seeing how far things can go only takes a few hours drive down Interstate 75 to Sandy Springs, Ga. The affluent Atlanta suburb has earned distinction as one of the most outsourced towns in America, garnering international press in publications like The New York Times and The Economist for its unique take on governance. After the city incorporated in 2005, it turned to the private sector for pretty much every service outside of public safety. Aside from its police and fire departments, it has only seven employees. 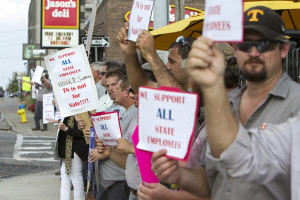 While the approach has made headlines—the Economist story ran with the title “Here’s how to do it”—a 2014 analysis from Iowa State University comparing costs and quality of services between Sandy Springs and four demographically similar, neighboring towns over a five-year period found that Sandy Springs performed below average. Overall, Sandy Springs spent more money per capita to function—as much as 30 percent more than its counterparts some years—and underperformed each year compared with other cities using a more traditional public model, although each town did outsource some operations, and some even used the same contractor. The study noted each city saved money after ditching CH2M-Hill, of Englewood, Colo., as a service provider.

“Perhaps these findings are not as damning for the ‘Sandy Springs model” as it is for the city’s relation to CH2M-Hill,” author Jack Feldman notes. “Each city that restructured its government service model away from CH2M-Hill found cost savings and/or performance increases after doing so.”

Back in 2000, economist Graeme Hodge analyzed 135 instances of government privatizing services in the United States and other countries around the world for his book Privatization, finding there was a mean cost savings of about 14 percent when public tasks were handed over to the private sector. Out of all 39 cases studies examined in detail, all but 12 netted savings; however, his research did little to gauge the quality of services those companies delivered, which has been an issue for some offices.

Tennessee has been credited with jump-starting the modern prison privatization boom when in 1984 it contracted out operations of the Hamilton County Penal Farm in Chattanooga and a juvenile facility near Memphis to Corrections Corporation of America, a Nashville-based company that has since grown to be the largest private incarceration overlord in the country. Again, the idea was to farm out the work in efforts to cut costs, but a number of studies by state and federal offices since then have found little if any differences in per-inmate expenditures, according to summations in a 2001 U.S. Department of Justice report.

Today, CCA operates six facilities in the state, including three prisons and three county lock-ups, but there have been no shortages of complaints and even some lawsuits related to its practices here in Tennessee and other states. Idaho in 2013 canceled its contract with CCA after the company admitted to falsifying staffing reports to make it appear some mandatory guard posts were fully staffed when, in fact, they were left vacant. It later reached a $1 million settlement over accusations of fraudulent billing and understaffing. Last month a spokesperson told the Tennessean that CCA did not respond to the state’s most recent RFI for facilities management.

City of New York officials fired contractor Hewlett-Packard and even looked into filing criminal charges after the information technology giant reportedly over-billed millions and performed work some city officials deemed as sub-par while working to upgrade a 911 dispatching system around 2009, according to an audit and New York Times report. Issues with the operating system may have cost lives, The New York Times reports, and the city in 2014 took control back from the private firm hired to operate the call center, Northrop Grumman.

The federal government may have also overspent when outsourcing some national security work, according to reports by the Project on Government Oversight, a nonprofit dedicated to rooting out government waste. A witness for the watchdog group testified at a Senate hearing in 2011, noting the federal government paid contractors 1.6 times what it would have cost public employees to perform the same intelligence work. The feds outsourced approximately 28 percent of its intelligence workforce that year.

“The argument for outsourcing services is that, by outsourcing services on which the government holds a monopoly, free-market competition will result in efficiencies and save taxpayers dollars,” the POGO report cited in the Senate reads, “But our study showed that using contractors to perform services may actually increase rather than decrease costs to taxpayers.”