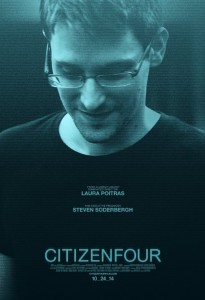 Citizenfour
When we want our mobile devices to know exactly where we are so they can guide us to the nearest latte or oil change, we are likely to concede the sacrifice of some privacy in exchange. But surely my cell phone service provider would never intentionally share or sell information that might later incriminate me or someone I know? According to this documentary by Laura Poitras, that only happens many millions of times per hour. NSA whistle-blower Edward Snowden purports that Americans have entered a brief transitional period, following which privacy will no longer exist. The format of this film is genius. Snowden anonymously approached the filmmaker and journalist Glenn Greenwald in 2012 and 2013. Together, the Greenwald and Poitras met with Snowden in Hong Kong and elsewhere for extended interviews on the subject of his knowledge and proof of the U.S. government’s illegal surveillance programs. The result is one expert on the subject interviewing another expert on the subject, while a third expert on the subject trains cameras and microphones in an extremely intimate, tense, and volatile setting.

Clouds of Sils Maria
A terrifically pretty film full of terrifically pretty people. Juliette Binoche portrays an actress asked to return in middle age to a play that helped launch her career decades earlier. The arc of the plot on stage is an affair between an established actress and her younger female assistant. Having played the assistant in her youth, Binoche is now cast—by reality and the producers—as the older character, in the process of exiting her prime. The dialogue for most of the film is lifted from the play, as Binoche rehearses with her assistant, played by Kristen Stewart. Thoughts on aging—gracefully and otherwise—are brought to mind, along with the ravages of celebrity.

The Bridge
This stark 1959 film was among the first artistic and widespread acknowledgments to come from Germany that the country’s role as aggressor during World War II had been a terrible idea and no good had come of it. Set during 1945, only a band of teenage schoolmates are left to defend their village from advancing American forces. Director Bernard Wicki does not flinch from the inevitable violent trauma and destruction. In the years since its release, The Bridge has been embraced in Germany and abroad as a necessary confession of sorts.

The Salt of the Earth
Filmmaker Wim Wenders could probably make interesting and watchable films about how he chooses a wine to accompany a meal or his laundry schedule. The best we can hope for is his chancing upon a subject that justifies and benefits from his near-limitless sensitivity and visual storytelling skills, which is the case here. The film focuses on the breathtaking work of Brazilian documentary photographer Sebastião Salgado. Rather than making a film about pictures and the people who take them, Wenders orchestrates conversations with Salgado and others such that the artist’s process is revealed and the viewer feels as if he or she has engaged with the photographer’s subjects.