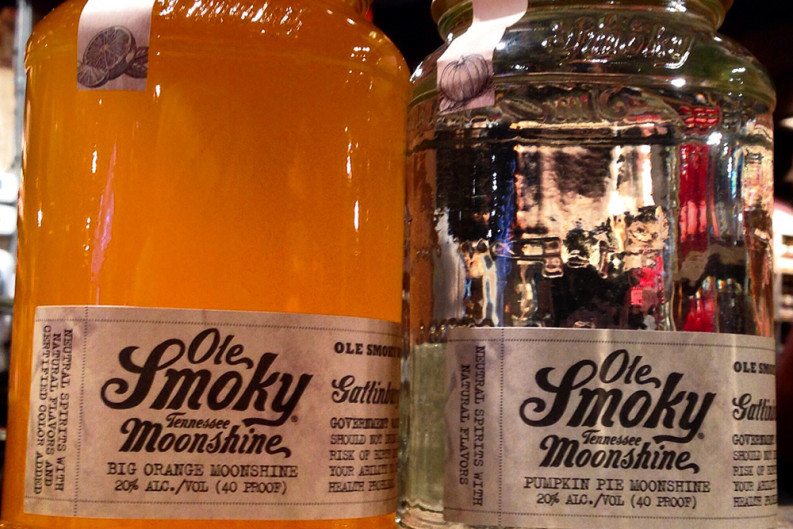 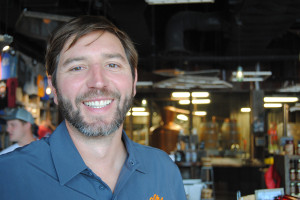 And yet, the man is a lifelong fan of the Vols. He celebrated his 35th birthday Sept. 7 and estimates he’s been wearing Big Orange, oh, 35 years and a day now.

And to his delight, he is now also able to drink and sell Big Orange—moonshine of that name and color distilled by Ole Smoky Tennessee Moonshine, based in Gatlinburg. Though he did pass that bar, Perkins serves as general manager for the company’s “outpost” at the Island in Pigeon Forge, which opened in October 2014.

“I am not wearing a suit and tie at the moment,” he notes happily. “Not ever, at work.”

The original Gatlinburg hub opened in 2010, seemingly minutes after Tennessee passed a law allowing the distillation of spirits. Both it and the outpost began producing the Big Orange flavor moonshine last fall. Perkins is careful to note that although the color is “as close to Big Orange as we could make it, and way closer than Adidas, when they were the UT outfitter,” the Big Orange moonshine is not in any way affiliated with the university or licensed by it.

This year, Big Orange is a bit stronger—70 proof versus 40. It’s on the sample line at the Island, a huge, airy, high-rafters barn of a tasting room and retail store. A tiny shot, tipped by a peppy young server in contemporary country gear, is citrusy, a little tart, a little sweet. And, wait for it—with a bit of a clear, hot, unrefined alcohol kick at the end.

Both locations are selling lots of it, so are distributors nationwide. Of course, the locals are wild for it, and this season Ole Smoky will indulge them with some orange and white labels. Out of the region, though, lots of fans have never even heard of the Vols, or seen a sea of fans wearing the same color as this moonshine—they just like the taste.

At the distilleries, which are open every day from 10 a.m. to 11 p.m. (though samples don’t start until noon on Sundays, compliant with state law), Big Orange will rotate out with the other seasonals, probably at the end of football season. In the liquor stores in all 50 states and across the globe that stock Ole Smoky spirits, though, it’s available year-round.

The widespread availability sort of amazes Perkins, who’s been with the company from the start.

“I made the transaction for the first sale ever; a guy from Minnesota bought some home-style,” he says. “We were absolutely smaller then, and while we all thought tourists might buy some to take home, I don’t think anybody really had any idea how it would take off. I never imagined it would be so worldwide, available in other countries, at military bases.”

Perkins imagines he first sampled moonshine, the not-legal kind, in high school. (“Don’t let my parents read that,” he jokes.) About that same time, as a teen in ’98, he got to see most of the games associated with Tennessee’s national championship, including the heart-stopping Tennessee-Arkansas buzzer-beater touchdown from Travis Henry.

Last year at this time, Perkins was opening this store and missed every single Vols game.

This year, he’ll make up for the omission, and is predicting nine wins for the Vols. Here’s how he figures it: “We made the bowl game last year when we came out with Big Orange moonshine. Now we’ve made it more potent, so I’m predicting even bigger things for the team, too.”

Big Orange Moonshine
Ole Smoky Moonshine at the Island in Pigeon Forge general manager Will Perkins’ personal favorite way to imbibe Big Orange moonshine is from a jar. As in sip from the jar—a quart canning jar like the old timers used, no shot glasses as intermediaries. But he also employs “fancier” ideas. “It’s got a great flavor if you put it in sweet tea or with a Sprite on the rocks,” he says.

Fancier still, but mighty potent, is his “Orange Fashioned,” which involves these steps:

1. Muddle a moonshine cherry with sugar.

4. Garnish with a moonshine cherry.

Between the 70-proof moonshine, the alcohol in the bourbon, and the alcohol content of the cherries, which are soaked in 100 proof alcohol, can I say “Go Big Orange?”

Or, as Perkins and the folks at Ole Smoky constantly remind us, “Always ’shine responsibly.”