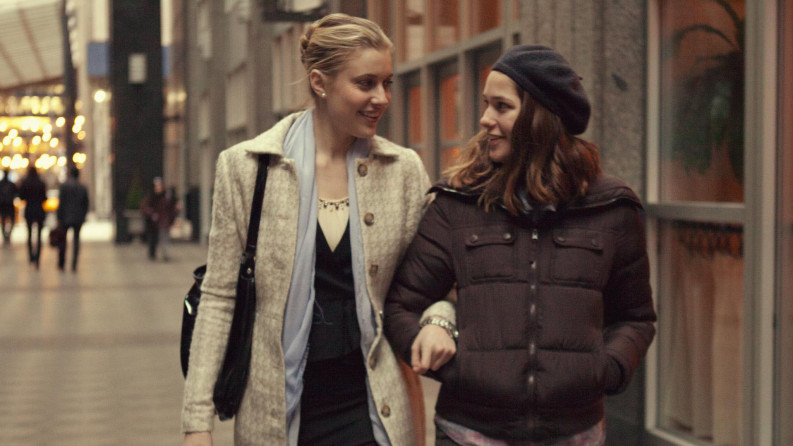 There’s as much Preston Sturges as Woody Allen in Mistress America, the latest film to team writer/director Noah Baumbach with actress/co-writer Greta Gerwig. Skirting the line between sweet and acerbic, Baumbach’s second film of 2015 (following March’s While We’re Young) is a zippy, entertaining, and very funny movie that blends screwball comedy with pensive, even melancholy undertones.

Gerwig stars as Brooke, a Holly Golightly for a generation that often seems to value narcissism and misguided introspection over meaningful connections with other humans. She’s the quintessential New York girl, and maybe, the film hints, the last of a dying breed. Brooke is a dreamer who skates from one professional venture to the next—she calls it “curating her employment”—while essentially squatting in an illegal Times Square apartment. She’d like to develop a TV series, or possibly an app, when she’s not busy thinking about designing clothes or almost being an interior decorator. In reality, or at least Mistress America’s version of it, Brooke is a spin-class instructor teetering on the edge of opening a restaurant.

Brooke is at once obnoxious and endearing, a feckless, self-centered whirlwind of chatter and activity. She’s the sort of person who would almost certainly be insufferable over the hours and days and years that make up a real-life relationship, but for the breezy 84 minutes that make up Mistress America, Gerwig imbues her with unabashed, endlessly quotable charm.

She’s the unstable nucleus of Baumbach’s whirling Bohr’s atom of a movie, but she’s not actually the main character. That role goes to Lola Kirke’s Tracy, a lonely, 18-year-old Barnard freshman with dreams of becoming a writer, and has trouble fitting in. She knows what she probably should do, but has trouble doing it. She’s never met Brooke, but Tracy’s mother (Kathryn Erbe) is about to marry Brooke’s father, so Tracy calls Brooke up one day to introduce herself. Before the younger girl knows what’s hit her, she’s drawn into Brooke’s vibrant, frantic life.

Their meeting catapults Mistress America into the first of its two terrific comic sequences: a chaotic, intoxicating night in the city that sees Tracy stumbling along in Brooke’s wake. Gerwig quickly asserts herself as not just an engaging leading lady but also a very funny one—someone who, at her best, conjures the daffy energy of Carole Lombard and the saucy charm of Claudette Colbert. Her entry alone—a self-conscious, theatrical descent down the steps of Times Square—is a marvel of comic timing. Brooke knows everyone, tries anything, and tosses out one-liners like plastic beads at a Mardi Gras parade. Tracy is instantly smitten.

There’s a darker side to Tracy’s girl crush, though. As she spends time with Brooke, hovering on the sidelines of the (slightly) older woman’s life, she picks up on the fraying edges of her stepsister-to-be—failed relationships, abandoned careers, botched friendships, an inability to follow through with anything meaningful. Tracy, who desperately wants to gain admittance to an elite literary society at her college, begins to co-opt large swathes of Brooke’s life for a singularly unflattering, thinly fictionalized short story.

Trouble ensues, but not before the young women embark on a road trip to Connecticut, where Brooke hopes to hit up a former flame, Dylan (Michael Chernus), for a $42,000 business loan.

Connecticut has long been a favorite destination for screwball-comedy travelers, and Baumbach and Gerwig orchestrate a dizzying sequence of entrances, exits, and rapid-fire repartee that would make Sturges proud. The film’s second half is largely confined to an opulent suburban home, where it becomes a theatrical farce with many moving parts; besides Tracy and Brooke, there’s a boy Tracy hopes to seduce (Matthew Shear); his jealous girlfriend (Jasmine Cephas Jones); Brooke’s former best friend (Heather Lind), who’s now married to Dylan; a pugnacious neighbor (Dean Wareham, also one of the film’s composers); and, best of all, a pregnant onlooker who’s stranded at the house and must constantly fend off the group’s offers of drugs and booze.

If it sounds ridiculous, it is. But it’s also funny, insightful, and eventually poignant. Like Brooke, Mistress America is so energetic and kinetic that it practically buzzes. It’s a screwball comedy that lives up to the geometric implications of the term, offering up whirligig twists and manic bounce in equal measure.