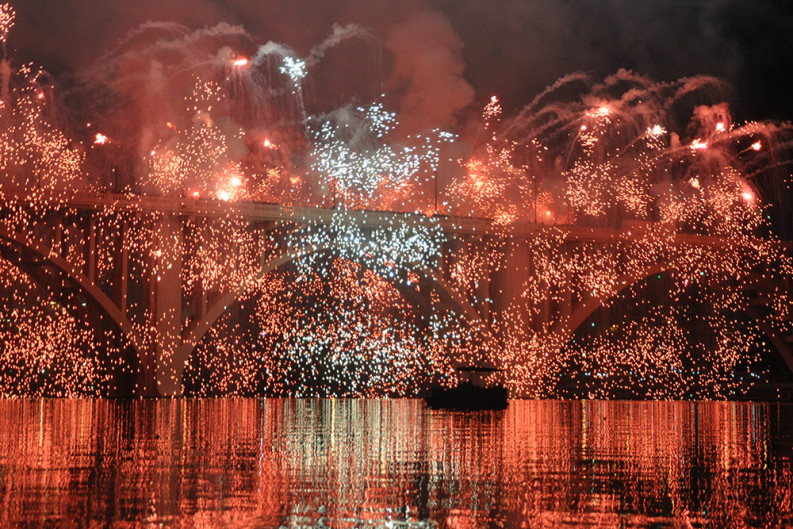 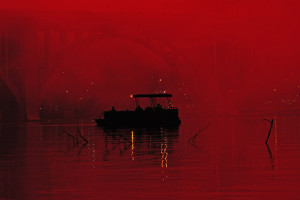 Like most paddlers, I usually employ my canoe or kayak to escape the cacophony of civilization: motors sputtering, roaring and emitting fumes; people arguing; barbaric yawps of pleasure or pain; boat wakes exploding against the disintegrating shore line; explosions. This Labor Day weekend, I decided to paddle toward all of this, into a high concentration of humanity gathered around the Henley Street Bridge for the final Boomsday, which would be my first.

My greatest fears involved parking and traffic, and the yellow kayak was my ticket, I thought, to escape this anxiety that had kept me away from the previous 27 Boomsdays. My first plan, to paddle from the mouth of the Little River, in Blount County, upstream to the show, guaranteed me a good parking spot. But then I began to consider that this would be a 20-mile paddle and that most of the sea-worthy vessels leaving Boomsday would be traveling west with me, in the dark, on the way home.

Plan of attack number two: launch from Island Home Park, about three miles upstream of downtown, on the south side of the river, and hope that the boat traffic would be more sedate, the craft smaller and slower than the westbound flotilla.

Mine was the only car at Island Home Park around 6. A man in a pontoon tied to a tree had this response to my plan of attack: “Don’t do it.”

“That’s what you got to watch out for,” he said, gesturing toward the channel, where a small runabout loaded with a dozen souls motored past. Its transom had only a few inches of freeboard.

“Kids are out there driving their daddies’ boats for the first time,” he said. The one with the flag out there, he said, almost ran into the bank. “And there’s another thing to watch out for,” he said, nodding at a boat pulling a wakeboarder toward the point of the island where small planes landed.

When the show ends, he said, that’s when the real fun begins. Chaos in the dark. Captains less than sober.

My kayak was still on top of my car. I could drive home and watch this thing on TV without breaking a sweat. Just as I was considering my fate, a half dozen kayakers arrived. I told them, “The guy in the pontoon down there says ‘don’t do it.’”

A woman with an electrified mane of gray hair stepped forward from the group: “We do this every year, fourth of July and Labor Day. Don’t worry. The police are fantastic.” This was delivered in a Boston accent full of optimism and authority. She sounded like a female version of Car Talk.

Impatient to be under way, I put in ahead of the kayaking group. There were frequent wakes from a variety of craft but nothing I couldn’t manage. The put-in under the South Knoxville Bridge on the north side of the river was jammed with trailers and vehicles, and as I rounded the bend near Southern States Asphalt, the pontoon guy’s description rang true. The entire river seemed blockaded by boats. I hadn’t seen any other paddlers, but I saw every kind of motorboat: from the Star of Knoxville paddlewheeler and houseboats up to 60-feet long to bass boats, speedy looking runabouts, and a couple of sailboats. The default seemed to be the pontoon.

The aroma of grilled meat supplanted the smell of petroleum products. A syrupy ballad blared from the left bank, hip-hop downstream from the right bank. Boat horns blared and people let loose high-pitched whoops of celebration.

The first kayakers I saw sat low in a tandem boat clinging to the iron bar ladder on one of the piers holding up the Gay Street Bridge. The guy in the stern, in big sunglasses and a camo headband, leaned way back, and the bow paddler sat up straight with a Nikon in his hands. The sunglasses guy predicted a downsized show, but the camera man hoped for a grand finale.

As I chatted with them, floating a few yards from the pier, a Tennessee Wildlife Resources boat puttered up to me.

“Are you planning on staying here long?” asked the officer looming above me in his green uniform with the holstered pistol on his belt.

Looking back on it, this sounded really smartass, though I didn’t intend for it to be. I said, “I had planned on staying for the fireworks show.”

What he meant was that I was sitting in the middle of the navigational channel and needed to move. He asked if I had a white light, and I flashed my headlamp at him. He was clearly unimpressed but found it acceptable.

I paddled away from the pier toward the left bank where Baptist Hospital used to be. It was a couple of hours before show time, and I tooled around between anchored boats.

One elderly woman, startled by my appearance off the stern of her pontoon, said: “I hope you don’t get run over.”

On another boat, a woman stood up to shout something I asked her to repeat: “I bet that’s a easy riding thing, ain’t it?” I think that was it. General mirth on the pontoon deck.

Almost everybody was affable and subdued, and I began to think that a kayak was the way to go at this thing, circulating here and there among the anchored boats for the best perspective on the coming show. If I didn’t like where I was or who was around me, I could leave without the fuss of pulling up an anchor and starting a motor.

As night fell, the horn blasts increased in frequency. A couple of dogs on the top of a double decker pontoon barked at the horn blowers. I winced in empathy for what was in store for their sensitive ears.

Between a sailboat full of kids and the double decker, I saw what looked like a flotilla of lighted Christmas trees drifting across the forbidden zone in front of the first row of boats. It was the crew from Island Home Park, their kayaks festooned with multicolored lights from bow to stern. A TWRA guy told them to get back behind the line.

Marie, the ringleader with the Boston accent, said they wondered where I had gone. They had had “munchies” back at the park that they’d wanted to share with me.

They drifted away and tied up to a boat on the front row. “He’s a kayaker!” said Marie of the big boat skipper, her voice carrying up to the spectators on the Gay Street Bridge. I stayed in my slot next to the kudzu-covered banks below the old hospital site, near the sailboat, which exuded something like the odor of burning leaves.

I fell in with the group of Christmas tree boats and we hugged the south bank back to the park.

A man and a couple of kids were having luck catching smallmouth, which given the traffic and the noise, went against everything I thought I knew about fishing.

We seemed to be the fastest moving group among the east-bound boats. There was no panicked exodus. People were actually put-putting home in their motorboats, maintaining their low speed beyond the “No Wake” zone.

At one point, we came upon the “Swan Boat,” where a group of a dozen or so had a small campfire lit. They were singing along to Randy Newman’s “Sail Away.” Most of us joined in.

We arrived at our takeout without incident. My car was still there, even though the sign I parked in front of said I would be towed after 9:30. It was nearly 11.

One of the kayakers held a flood light as we disembarked and scaled the 4-foot bank. I felt a glow of goodwill, a gladness for having been a part of something big. Marie had been right about the professionalism of the police and the good behavior of the general populace. I never thought I’d say such a thing, but the experience made me sad that Boomsday was ending. One could only hope that the admirable maritime etiquette continued year-round, without the extra police presence and the incentive of the spectacle. 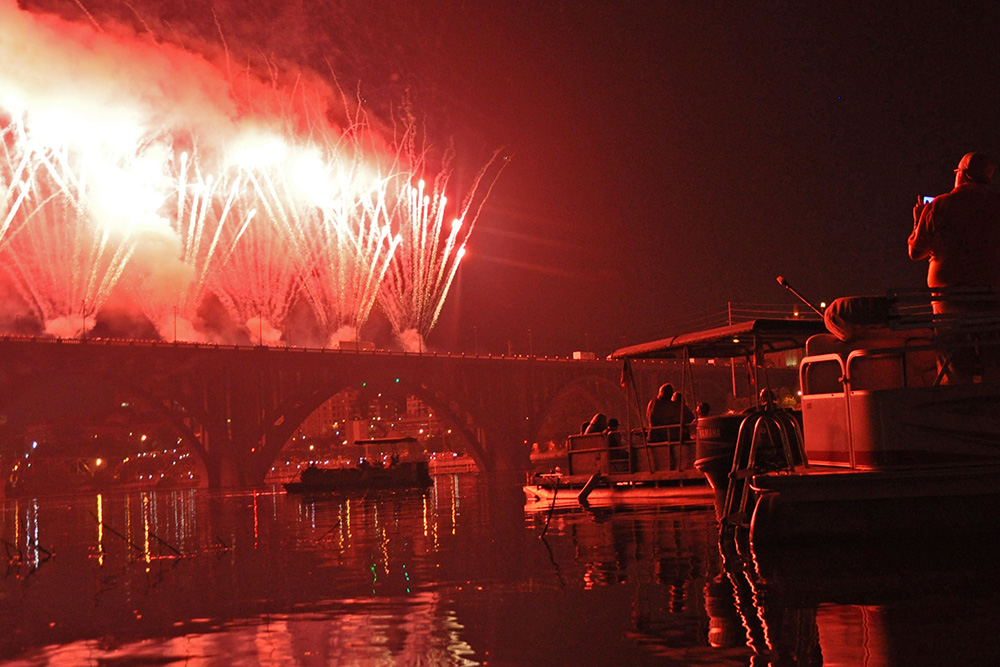