The Birth of Tennessee Football - The Knoxville Mercury 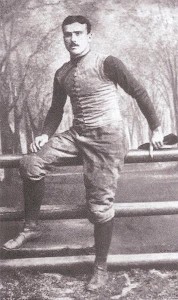 Knoxville was not always crazy about football.

Although college football is most popular in the Southeast, the new sport, which evolved in the Northeast in the 25 years after the Civil War, caught on in other parts of the nation before it was ever seen in East Tennessee. During that time, baseball and horse racing were Knoxville’s most popular sports.

Still, one of the nation’s first major national football stars was a Knoxvillian. He did not play for UT. Lee McClung was a member of one of Knoxville’s most prominent families. His father, Frank, is the honoree of UT’s McClung Museum. His older brother Calvin was the merchant in charge of C.M. McClung & Co., whose warehouses stood prominently on West Jackson Avenue. Calvin’s archives became the basis for the Calvin M. McClung Historical Collection.

Lee McClung, nicknamed “Bum,” played halfback for Yale from 1888 to 1891, and was captain of the team during Yale’s famous unscored-upon season in 1891. He has been called America’s first national football star.

McClung’s success raised the profile of college football in Knoxville. However, the first to start a team in the Knoxville area was probably a Japanese student at Maryville College, Kin Takahashi, who had learned football in the San Francisco Bay area, where it was already a sensation. He began practicing with a Maryville College team in 1889.

City boosters believed football would raise Knoxville’s status as a modern, sophisticated American city. The daily Knoxville Journal was a strong proponent. “Football is one of the most exciting games of the time,” went one editorial in 1891. “Knoxville people are not well acquainted with it, but it is high time they were swinging into line and giving it the same place in the winter that baseball holds with them in the summertime.”

A local club, an independent Knoxville team, got together in 1890, and the famous Lee McClung came home to help train them.

UT finally fielded a team in late 1891, largely thanks to a young teacher named Henry Denlinger who had played for Princeton, and later for the Knoxville city team. UT played its first game, a loss to Sewanee, on November 21, 1891.

On October 15, 1892, UT played Takahashi’s Maryville College team, and won, 25-0. In the early years, not all of UT’s opponents were other colleges. UT played anyone who agreed to play, including the Knoxville Athletic Club, local prep schools, the YMCA, and the Tennessee School for the Deaf.

Not yet called the Volunteers, UT’s club was sometimes called “the Universities.” The colors came first. Although the university’s earlier baseball team had used the color red, by the 1890s, UT’s iconic Hill was planted with orange-yellow daisies, and the team chose that color.

Early games were played at a baseball field on Dale Avenue, at Chilhowee or Fountain City Park, and eventually at Wait Field, on Cumberland Avenue on the northwest side of the Hill. It was a hard, rocky field, and part of its end zone sloped uphill.

UT did not have a proper regulation field until the completion of Shields Watkins Field in 1921. It presaged an era when Volunteer football became much more popular among Tennesseans, even those not associated with the university.

Lee McClung never heard that football had caught on in his hometown. He became U.S. Treasurer, and his name appears on currency printed from 1909 to 1912, during the William Howard Taft administration. A world traveler, McClung was in London when he died at age 44, reportedly of typhoid. McClung is buried in Knoxville, in the elaborate McClung plot at Broadway’s Old Gray Cemetery. He later became one of the early honorees of the College Football Hall of Fame.