What the Heck Is a TMDL? And What Does it Matter? - The Knoxville Mercury 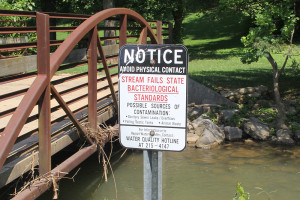 “TMDLs” are documents meant to identify dirty creeks and create a road map for cleaning them up. But they are vague, outdated, and even state regulators don’t seem entirely sure they have a point.

When waterways are too polluted to support the kinds of uses you’d expect, like fishing or recreation, the Tennessee Department of Environment and Conservation adds them to a list required by the federal Clean Water Act. When a particular kind of pollution is extreme, the state assigns the stream a “total maximum daily load,” or TMDL, using a document of the same name. The pollution generally falls into a few categories: bacteria, sediment (too much dirt in the water) and altered habitat, acidity, and nutrients like nitrates.

But most of the TMDLs written for creeks in Knox County are more than a decade old and may reflect very outdated information. And some local streams still lack any TMDLs for certain types of pollution (nitrates), more than 40 years after passage of the Clean Water Act.

“We are woefully low on TMDLs,” says Dana Wright, water policy director for the Tennessee Clean Water Network. “They should be created for every stream section on (the impaired) list.” She adds that she has never seen a TMDL updated, even when the state changed its standard for measuring bacteria pollution.

TMDL documents often contain large cookie-cutter chunks that prescribe the same (very general) solutions. Sometimes even TDEC officials struggle to explain what the TMDLs offer that isn’t a duplication of work done by other divisions within the agency.

“The TMDL is really more about getting the source identified,” says Sherry Wang, who managed the TMDL watershed program for 20 years. “The TMDL is not a major vehicle for us to get action on the ground. In Tennessee we have a lot of very good programs. We don’t really need the TMDL process.”

Yet some say they do have a purpose: Helping local governments prioritize stream improvements and justifying new restrictions that help.

“TMDLs are an excellent way to look at what is causing an impairment in a watershed—where are sources coming from, and how are those regulated,” says Robert Karesh, TDEC storm water coordinator.

TMDLs list only a few pollution sources by name. Locally, Rinker Materials and Vulcan Construction quarries may be loading dirt into Fourth Creek, its TMDL indicates. Rinker and Ready Mix Concrete may be muddying Turkey Creek, and Southeast Precast Corporation may be doing the same to Third Creek. Some of the bacteria in Beaver Creek is likely coming from sewage treatment plant overflows in the Hallsdale-Powell Utilities District and the West Knox Utility District, according to their TMDL documents. The TMDLs place no new restrictions on these sources, although they may affect individual water permits.

More often, the documents blame unnamed, ephemeral pollution sources like runoff from roads and nutrients from farms, and leave local governments to handle them through state-required stormwater programs.

David Hagerman, Knoxville’s director of storm water management, says the city has recently shifted to a new method for reducing mud in creeks based on the TMDLs. “To really focus on the TMDL, you have to partner construction monitoring and habitat restoration,” Hagerman says. (See main article for more detail.) Knox County has taken a similar approach in the Beaver Creek watershed, says Chris Granju, Knox County stormwater manager. He says the county also uses TMDLs to target education for industry groups like car dealerships.

But neither the city nor county stormwater programs use TMDLs much in construction site monitoring, which is how they spend the lion’s share of their time. Granju and Hagerman say they don’t inspect construction sites more often or issue stiffer penalties for erosion at sites that drain to impaired creeks.

Behind from the start

In the Fort Loudoun Lake watershed, 10 streams at least one TMDL. Many have one for both sediment and bacteria. First, Second, Third and Love Creek have also been identified as needing a TMDL for nitrates, but none has been written.

In fact, the only reason any of them were written was because of a court order. (Wright jokes that TMDL stands for “Too Many Damn Lawyers.”) When EPA was sued for failing to enforce the Clean Water Act, it gave Tennessee until 2008 to complete TMDLs for two-thirds of the streams that qualified a decade earlier. In other words, it took ten years to catch up to 1998. The decree still has not been lifted, according to EPA’s web site.

Now all TMDLs for toxics and pH (i.e. acidity) are done, as are most of those for pathogens (i.e. bacteria that can make you sick), says Wang, who is now a technical fellow for TDEC’s division of water resources. Local TMDLs for sediment are also finished.

By law, state environmental regulators must also write TMDLs for nitrates, most commonly found in fertilizers and some pesticides, that can kill fish and cause algae blooms in low-flow creeks. Although Wang says these aren’t a high priority and may take another decade, Hagerman says he needs them. “I don’t think we can say we know what we need to know” about the level of the pollution or what the sources are, he says. That makes reduction efforts a stab in the dark, and tougher to justify.

“Do we ban yard companies from spraying in certain conditions?” Hagerman says. “Do we ban Lowe’s and Home Depot from selling certain amounts of fertilizer in specific months? It’s good to be able to point to something and say, ‘We’re not just making this up.’”

The data for creating TMDLs usually comes from the state’s sampling for creating watershed plans, which are supposed to be updated on a 5-year cycle. But the Fort Loudoun Lake Watershed Plan hasn’t been updated since 2003, about the same time its TMDLs were first written. The delay is related to the state’s efforts to make consent decree deadlines. Sampling was still done on the five-year timeline but wasn’t used to update TMDLs or the watershed plan, says Michael Atchley, Knoxville field office manager for the division of water resources.

Wang says the assessment for the Fort Loudoun Lake watershed shows that stream health is improving, although probably not enough to remove streams from the impairment list.

However, Atchley says testing showed “significant improvement in Fourth Creek,” especially in terms of animal and plant populations. Harmful bacteria in Third Creek has been reduced enough that the state might be able to lift the “do not touch” posting requirement, although the creek still has too many pathogens to meet its intended uses.

“Maybe we add that (creek) to a sampling plan that’s more frequent than a watershed-based plan,” he says.

Hagerman says he has seen water quality in Williams and Love creeks improve radically, so if the state won’t expand its testing in those creeks, then the city might do so.

• Knoxville’s Creeks Are a Polluted Mess. Will They Ever Be Clean Enough to Enjoy?

• The State of Knoxville’s Creeks