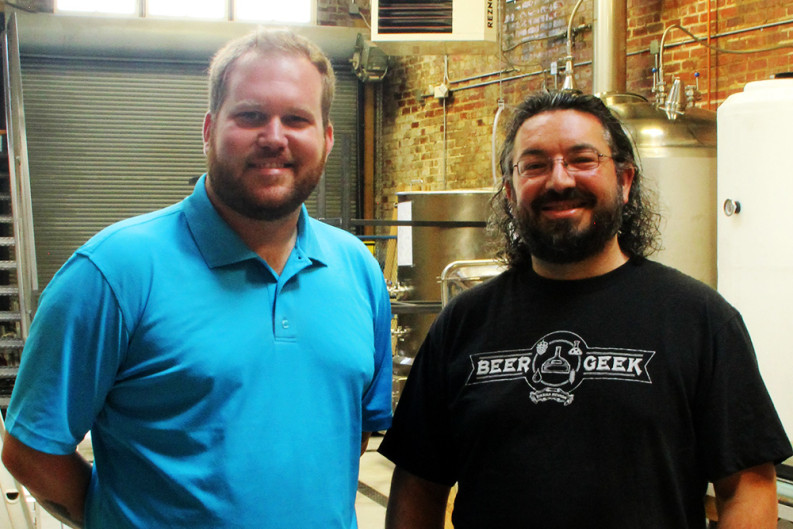 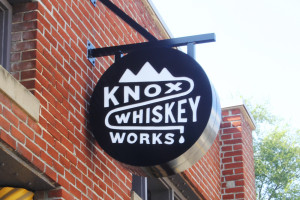 It reminds me of a cartoon that won a New Yorker caption contest a few years back. Two anteaters at a picnic with a frosted layer cake between them.

Knox Whiskey Works, co-owned by Cindy Nichols with 10 others, managed by Knoxville restaurant-scene homeguy Stanton Webster, and tucked into a light and airy spot (at 516 W. Jackson Ave.) about the size of a big garage, is also waiting for good things to come.

That’s how it works in the small batch, craft distillery business—everything from the license for distillation to the aging of whiskeys and bourbons can take a good long while.

But KWW, which started construction nine months ago, made one big stride this week with the hiring of Ryan Catlett as head distiller. And the new head distiller says it’s possible an “unaged whiskey offering” or two might be ready by early fall. No one is ready to circle a date on the calendar, not while the “front damn doors” still need inspection, according to Webster, and any other kind of small business headache that could develop, but KWW is well on its way.

Catlett—a burly, soft- and carefully-spoken redhead—will lead the process from grain sourcing to bottling, and seems happy to be on board.

After some good-natured banter about the misguided folks who seem to think he looks like Joss Whedon, he gives me a sneak peak of the distillery-in-progress while filling me in about the checkerboard pattern that landed him here. High school in Oak Ridge was followed by serving four years in the Air Force in a post where “fluid dynamics” involved petroleum-based fuels and process engineering, though it too involved pumps and valves and holding tanks.

He studied at University of Tennessee. Engineering? Something with chemistry?

“Ah, music,” he answers, and I notice the guitar tattooed prominently on his forearm. The degree was recording arts, but somehow he ties it all together. “It’s also fluid dynamics in its fashion,” he says. “You just can’t see the material going through the line in audio recording.”

More recently, Catlett had a gig as production manager at Popcorn Sutton Distilling in Newport. In between that and school, he learned most about distilling as an avid home brewer and a force in the Tennessee Valley Homebrewers Association.

But this won’t be beer, not in the vats, not in the little side room that will serve as tasting room in the future—which will require a whole ’nother set of those hard-to-come by licenses. 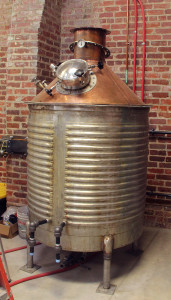 Instead, once the doors are inspected and the contractors, country guys from Greenback, are done with the drilling—and Catlett’s lab scales and graduated cylinders come out of the bubble wrap—the process will run thus: A “substantial amount” of heirloom Hickory Cane corn from Riverplains Farm in Strawberry Plains, will be milled by Valentine Mills in Dandridge, taken in at 516 W. Jackson, and basically mixed into hot water in a giant vat—like grits. (This is also when they would mash in extras, like rye or malt, maybe some wheat that would make the final product, “a little more mellow, a little more sweet.”)

Next, the concoction goes into one of three fermentation vessels lining one wall; the ethanol is produced at this stage, and it’s “essentially beer made from corn, meaning, you don’t want to drink it,” Catlett says.

Then there’s the distilling, twice in this copper beauty with valves sticking out like IVs.

And, finally, it’s bottled as corn whiskey. This is the stuff we may get to sample in early fall, a moonshine of sorts, classified as “unaged whiskey.”

But other mixes that come out of the still will be pumped up into barrels that will reside in KWW’s loft, though at the moment it is just a floor with a skylight. Those barrels, says Catlett, per our government, will be “new, never used, charred American white oak barrels.”

The spirits will age “at least” two years, says Catlett. He’ll employ a “barrel thief,” which works along the same premise as sampling a beverage from a glass by holding your finger over one end of a straw and dipping—to test and take notes quarterly.

But those are a ways off. “Think of them as products still in the lab,” he says. “None of this is going to happen right off the bat. In the future, yes. And meantime, we are going to have a good time experimenting with everything.”

He’s 31 now; he’ll be at least 33 when those first whiskeys or bourbons are finished aging. But he plans to be downstairs, making more, when it happens.

Corrected: In a previous version of this column, Cindy Nichols was identified as the owner—however, she is actually one of 11 owners.