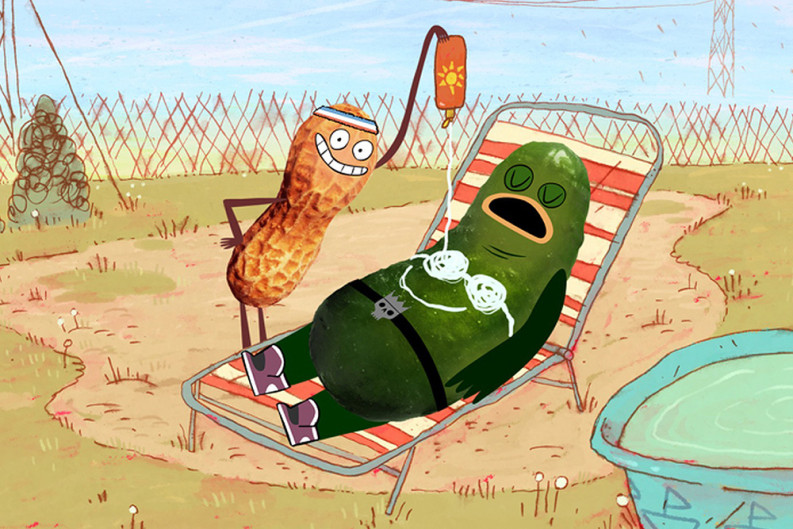 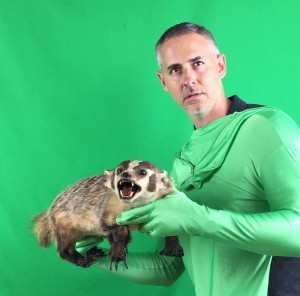 About six years ago, Yo Gabba Gabba! cartoonist/music-video director Joel Trussell decided to stop working out of the bedroom of his West Knoxville house and join the animation industry at its crossroads: Hollywood, Calif. He and his family picked up stakes and moved to the San Fernando Valley, armed with what he thought was a short-term contract to work on a project for HBO. But that project blew up, along with the job. So he went back to freelancing—making low-budget music videos and “terrible commercial campaigns.” But he also hooked up with animation studio Six Point Harness, which led to his biggest gig yet: working with Tom Hanks in 2012 to produce Electric City, an animated post-apocalyptic science-fiction miniseries that debuted on Yahoo. That in turn led to consulting gigs with Walt Disney Animation Studios, and finally to something he never thought he’d be interested in: a full-time studio job. Along with Fish Hooks producer Noah Jones, Trussell is co-helming Pickle & Peanut, a decidedly un-Disney-like, bro-friendly cartoon series premiering on Disney XD on Monday, Sept. 7, at 9 p.m.

When you left Knoxville, you didn’t have the goal of working for a big studio—yet here you are working for the biggest one. How did that happen?
I had been doing freelance for Disney all along—character design, development, just little stuff. They had this project come in called Pickle & Peanut, and they introduced me to this guy Noah Jones, who I knew had worked on Fish Hooks. I wasn’t really interested. “Eh, whatever.” But I met the guy and we hit it off, and it seemed like a fun little project. They brought me on as a consulting director; he already had the idea of, “I want to do a lo-fi show about two bonehead teenagers.” I thought that sounded interesting, and I for sure would love to come on and see what I could do to mess it up, just to have some fun, because I’m not part of the Disney machine—I don’t care about making this thing look anything like a Disney thing. I’d rather just have some fun, really, and make something on Disney’s dime. And at the end of the day if it’s not a good fit for Disney, then I at least did a thing where I can show my sensibilities off.

But then this Pickle & Peanut thing picked up traction, which was surprising to everybody. Everybody who was watching us do this was like, “This is off-brand. This is funny, but we’re pretty sure that this is fundamentally not good for Disney.” We’re like, good, good! That’s what I want to see! I wanted to do a thing that made people kind of raise an eyebrow.

But it was real strange because at the time this Disney XD channel was sort of like a weirdo island, an experimental ground—we weren’t sure if it was going to last as a channel. So we were like, that’s perfect, that’s exactly where we want to be. But while we were there, it started honing itself, building itself up. Things got more and more serious as we went along, and before you know it, we’re not only making a pilot, but we were greenlit for a series. So now I’m in, now I’m taking the full ride. I’ve got the golden handcuffs on now—I’ll take ’em, because it’s been a lot more fun than I would’ve imagined.

Most Disney watchers, or critics, will probably agree this is a quite different show for them—why do you think Disney was open to shifting its tone and style?
I think there are a lot of ingredients to that. First of all, when I went over there, I remember XD trying to do some real boy-centric, aggressive, kick-butt action kind of stuff. They had Tron at one point, which is amazing to look at, super high-end quality—but almost too serious for kids to latch onto. It was a lot to digest. So I don’t think the viewership was real high on that stuff. Just observing from the inside, I think they were like, “Maybe what we ought to do instead is just go for comedy.” It just so happened to be while I was there that that window of opportunity started to crack open. I’ve always worked scrappy, I’ve always been lo-fi, I’ve always been by the seat of my pants, so I’m sure they were like, “Hey, you know what? This don’t look so bad for us either because we can probably give it a slimmer budget and still get the entertainment value we want out of it.”

Why did you go with a very un-slick look for Pickle & Peanut?
I’m intrigued if you make something decidedly lo-fi, I like to see that work. As long as it doesn’t look like a mistake, then I think it’s acceptable, and maybe even enhanced because of that. For instance, one of our big inspirations for this piece was Beavis & Butt-head—not a beautiful show, right? But it’s funny because it feels like the voice of the characters comes through in the artwork—it looks like Beavis and Butt-head had a hand in making Beavis & Butt-head. So we wanted to bring that kind of aesthetic to our project because our characters also don’t have many resources, they don’t have a ton of talent, but they’ve got a lot of heart and they’re going to give it a go. So we’re trying to have that hand-crafted, homemade type of feel in the show, and I think it pays off because you do get laughs out of that.

And you never got any of those infamous studio-executive comments, like “These characters aren’t cute enough! How can we sell toys with this?”
You know what? We didn’t! It was real weird, and I do think it had to do with timing because it was not a super-difficult process. They just kind of let us fool around and do our thing, and everybody was laughing. Whether it was for Disney or not, we were entertaining—all the executives were laughing. I think they would shoot each other glances, like, “Oooh, I don’t know.” A lot of wincing, a lot of cringing going on, but they were entertained. But it is Disney, so the one big commandment is story. We couldn’t be just completely random. And we’re better off for it. Every story we tell has to have the elements of good storytelling—there’s an emotional driver, and you’ve got your three-act structure. They are definitely demanding as far as that goes, and it’s been a good thing because we wanted all of our humor based off of an authentic, teenage-boy relationship. The way that they feel about each other, and the way they support each other, we wanted that to feel real, and as long as that emotion was there, we could build all this other crazy stuff on top.

Pickle has a rather noticeable butt crack in the pilot episode. Will this be the first Disney series to break that butt-crack barrier?
Boy, oh boy. I don’t track many Disney shows, and I don’t know if Phineas and Ferb has already broken that ground, but don’t think so. We might be. Now, the thing about his butt crack—we only bust that out here and there. Sometimes he does, sometimes he doesn’t. If a scene necessitates a butt crack, we’ll put it in there—but we’re not crazy.