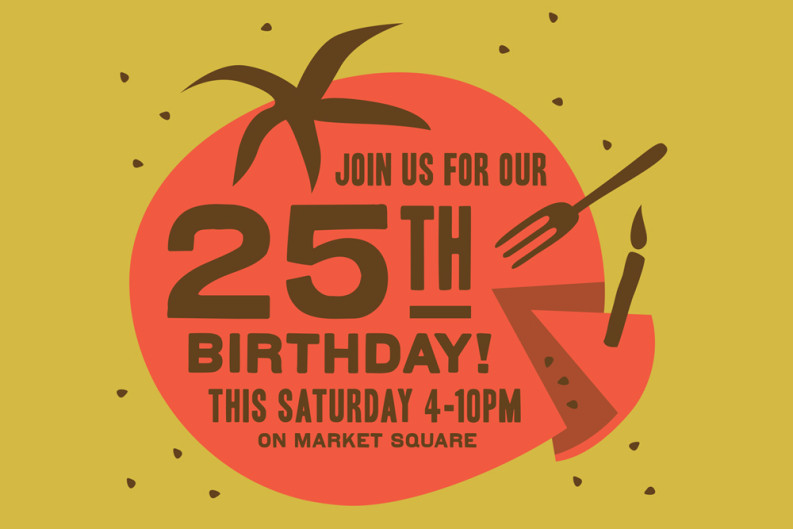 Tomato Head’s Silver Anniversary Party this weekend on Market Square is partly a fundraiser for the Knoxville History Project.

The Knoxville History Project is a new educational nonprofit whose mission is to research and promote the history and culture of Knoxville.

Although Knoxville is home to several worthy historical organizations, the KHP is the only organization devoted just to the particular history of the city of Knoxville. Working closely with other nonprofit organizations, including the East Tennessee Historical Society, the Knox County Public Library, the Tennessee Archive of Moving Image and Sound, and Visit Knoxville, the KHP offers talks and tours to schools, museums, service groups, and other organizations. Consulting with developers and government organizations on projects concerning Knoxville’s history, the KHP accepts fees for services, but its main source of revenue is philanthropic contributions. (Contributions to the KHP are tax-deductible.) It also supports independent journalism. Its largest single project is the Knoxville Mercury.

The Knoxville Mercury is a new nonprofit newspaper. It is not a tax-exempt nonprofit, like a 501(c)(3). Most of its revenue comes from advertising. The Mercury also accepts contributions, especially through its League of Supporters campaign. Those contributions are not tax-deductible.

Market Square, the site of this weekend’s free Tomato Head 25th birthday celebration, is one of East Tennessee’s most historic sites. Established in 1854, it has served as a produce market for every growing season since then. By the 1860s it was also a commercial, political, and cultural center. Music has been part of the Square’s history since the early days. Some farmers played fiddle or banjo to attract customers to their stalls. The Market Hall, which stood on the Square from 1897 to 1960, included an auditorium that hosted hundreds of performances over the years, from Roy Acuff to Duke Ellington.

After the removal of the Market House, the open Square has witnessed thousands of performances, especially in recent years, when live concerts are almost a weekly thing during the warmer months. Scott Miller was singer for the V-Roys when they played Market Square in 1998, for the first-ever show in the Sundown in the City series, surprising many by drawing a crowd of several hundred.

Tomato Head played a major, and perhaps critical, role in the revival of Market Square. Though famous for their pizzas and sandwiches and burritos and soups, in ever-changing creations, Tomato Head changed the way Knoxville viewed their downtown, by pioneering outdoor seating, evening and weekend hours on Market Square, when the place was usually empty, and the then-new idea of a no-smoking restaurant.

Tomato Head also helped launch alternative journalism in Knoxville. One of the most regular advertisers in Metro Pulse, Tomato Head’s creative display ads became one reason to pick up the paper.

Plus, Scott Miller, the singer-songwriter who has since produced several critically acclaimed albums and developed a national following, was the subject of one of Metro Pulse’s first cover stories, back in 1991. He’ll be the main entertainment Saturday night, on a bill that also includes several other popular entertainers of the last 25 years: Guy Marshall, Jacqui and the Tumble Kings, and Exit 65.

This weekend’s party will be a celebration of natural allies.

ID wristbands are $2 each. All proceeds will go to the Knoxville History Project. Those 21 and over will be able to purchase beer from Saw Works Brewery, including a special Tomato Head silver anniversary brew created by Saw Works and Tomato Head co-owner Scott Partin.