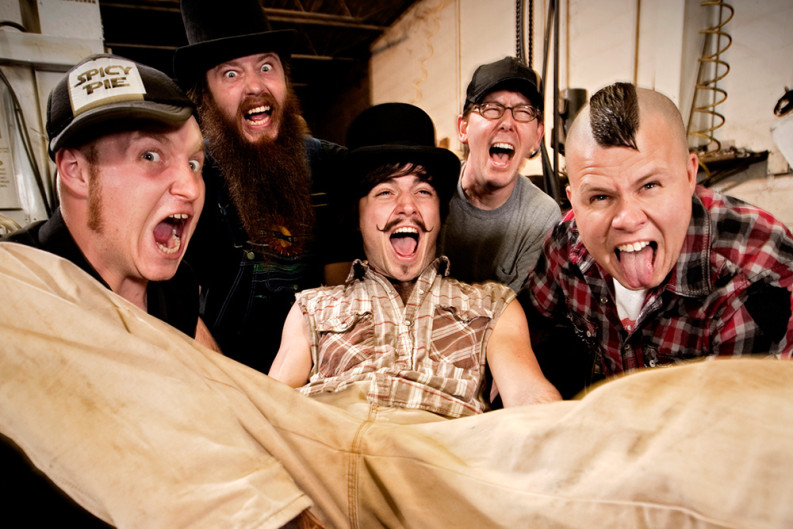 One of Clay Maselle’s newest songs is titled “Trailer Park Astronaut”—a fitting description for the quirky “gypsy-punk garage-grass” he creates with Chattanooga’s Strung Like a Horse. Backed by fiddle, banjo, upright bass and a percussion stool, dubbed “Bertha,” adorned with rotary phone bells, the frontman sings in a half-yelp/half-yodel about murder, bird dogs, and broken hearts. It’s a style too warped to jibe with the ongoing pseudo-bluegrass revival of modern rock (see: Mumford & Sons, the Lumineers). But it’s paying off well for the quintet, who’ve become a charmingly weird staple of the Chattanooga scene.

Maselle, a Mississippi native, formed the band around 2010 in his Chattanooga garage/basement; he settled there after fleeing Colorado to pursue music.

“I did a big road trip and drove all over the Gulf Coast, down through Florida, up the East Coast, through the Smoky Mountains, hit up Asheville, Knoxville, Nashville, Chattanooga—I went everywhere,” he says. “Chattanooga is the town that really struck me the most—just a really vibrant downtown and people making art, doing stuff, people paying attention.”

Despite the singer’s inexperience—and the group’s revolving-door lineup—Strung Like a Horse quickly found its niche, drawing strong crowds at local venues like Rhythm & Brews. Their penchant for theatricality hasn’t hurt, either; the band often performs with a belly dancer, Lacy Jo. In 2012, they packed Market Street with 1,000 fans for the “Strut Like a Horse” parade, backed by fire-breathers, jugglers, and stilt-walkers. (“Chattanooga, why would you let us do that?” Maselle says, laughing about the memory.)

Maselle took an indirect path toward building the band’s current lineup, plucking disparate outsiders wherever he could find them. Drummer Crispy had been playing in a variety of reggae bands, and fiddle player Spooky spent time as a street musician. “I don’t know if he was homeless or what at the time, but he was playing music for money down under the bridge one day, so I went and snatched him up,” Maselle says.

After Strung’s original bassist quit for a day job, Maselle tracked down his replacement, B.J. Hightower, at a local tavern, convincing him to join their ranks—even though the new recruit was initially skeptical about the unorthodox arrangements.

“It’s not typical for an upright bass player to play those songs,” Maselle says. “They’re all really weird. The timing is weird. The changes are weird. It’s not standard stuff. So he was like, ‘You want me to do what?’ But he took on the challenge and kind of fell in love with it.”

Now Strung are prepping a Sept. 25 release show for their debut album, Free, set for Rhythm & Brews’ final weekend of concerts. Self-produced and recorded at a mix of professional studios, “laundry rooms, closets, and basements,” the album maintains the band’s freewheeling bluegrass sensibilities but also veers into sophisticated new territory.

“It’s a really diverse kind of sound that we’ve created on this one,” Maselle says. “We’ve got some anthems on there, some really spacey, weird stuff, some funk-driven stuff—there’s even one about getting abducted by aliens.”

Free veers from the blues-punk strut of “Brag” to the classical-styled mandolin runs of live staple “Opus Zero” to the doom-laden, metal-grass intro to “Horizontal,” the title of which references an in-joke made by Hightower about Maselle’s off-kilter songwriting process.

“I’m a horizontal songwriter,” the frontman says. “I don’t necessarily create a hook like you probably should if you’re trying to sell your music in a mainstream way. I like to write part of a song and then come back to it with a totally different inspiration to finish it. Rather than stacking a song vertically, I write from left to right—one long sentence.”

Strung’s current quintet has been together for over a year, and the band’s spent nearly that whole time fleshing out Free. Maselle says he’s currently working 12-hour days to finish the project—tweaking the final artwork and setting up pre-orders through the project’s Kickstarter page. The album marks a new chapter for the band—and it’s a testament to the city’s cultural reach.