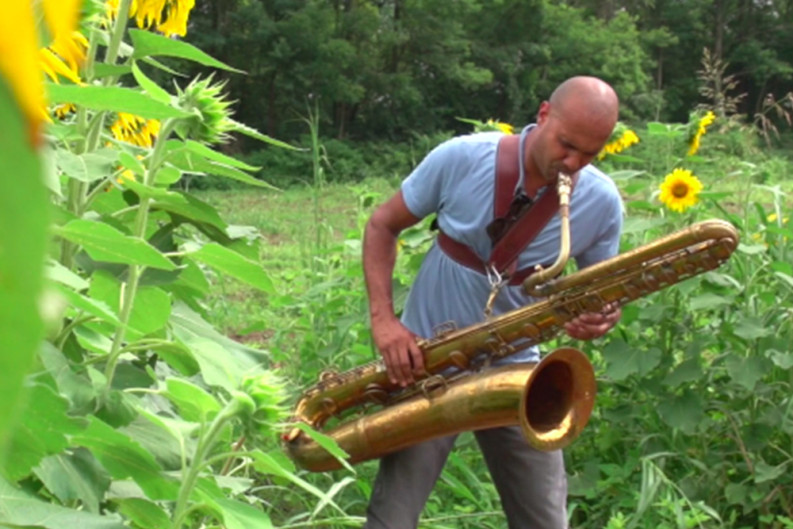 In honor of the 10th anniversary of the Legacy Parks Foundation, 10 Knoxville-area musicians are starring in a series of music videos highlighting the outdoors beauty of the city—taking them out of their natural barroom environments and thrusting them out into actual nature.

The 10 videos, all premiering on Monday, Aug. 31, at WDVX’s Blue Plate Special, feature some of Knoxville’s most well-known musicians, such as R.B. Morris, Trisha Gene Brady, and Wil Wright, performing in some of the city’s most pristine natural environments, including House Mountain, Bicentennial Park, and Fort Dickerson Park. In each video, the musicians perform a song surrounded by beautiful natural scenery, which for jazz musician Jason Thompson meant playing an improvisational piece in a field of sunflowers at Forks of the River Wildlife Management Area.

“It just kind of brings the whole culture of Knoxville full circle,” Thompson says. “We all come from the earth, so protecting these natural spaces within our beautiful city is going to bring us more acclaim as far as the city goes and keeps us in line with our heritage of natural beauty.”

The video series is the brainchild of Amy Gibson and Bob Deck of AK Consulting, who, working with marketing firm Pyxl, say they wanted to celebrate the conservation work of Legacy Parks with their friends in local music.

“If you start to see how beautiful these places are, and you see what people are doing, musically or preserving nature, whatever it is, you start to see how active we are as a community and how vibrant we are,” Gibson says. “[The videos] are speaking to Knoxville as a whole. This is what Knoxville is like. If you’re into music we have great music. If you’re into the environment and recreational resources, we’ve got that.”

While all the natural spaces were selected by Legacy Parks, the artists had freedom to choose a location that meant the most to them.

For R.B. Morris’ performance of “The Eastern Star,” Gibson and Deck placed him at the head of the Tennessee River, the convergence of the Holston River and French Broad River, so he could include a poem of his own about the river.

“The Tennessee River is almost like an invisible river,” Morris says, “I don’t think most Knoxvillians pay any attention to the fact that it’s there. The river in modern times doesn’t serve the same function it did to the town when it was founded, but still, it’s the Tennessee River. It’s right there.”

Through the videos, Morris says he hopes people become more aware of Legacy Parks Foundation and the organization’s conservation efforts in East Tennessee.

“There’s a lot of natural beauty in East Tennessee,” Morris says, “And unless people are aware of it and protect it, we’ll lose it.”

Legacy Parks Foundation has saved more than 1,000 acres of land in Knox and Blount counties by buying the property and preventing development. Since 2007, the organization has raised more than $3 million to protect the natural landscape in East Tennessee.

“I want [people] to be proud of where they live,” Deck says, “Yes, appreciate Legacy Parks and their work, but also have a sense of ownership of where we are and the opportunities that the area presents that mostly don’t cost anything.”

The video project perfectly combines music and the outdoors, says Trisha Gene Brady of the Black Lillies, who performs an a cappella version of “Hills of Home” on top of House Mountain in her video.

“Where there is a camp-out or a river-float, there is usually a campfire pickin’ after,” she says by email. “There is no better time to get out and take in the beauty that we are surrounded with. Every day is another chance to experience such a majestic place.”

Provided the videos are successful, Deck and Gibson say they hope to continue the project with more musicians and return to some of the same spaces as the seasons change, giving a new look to the scenery in the videos.

The videos premiere online Monday morning at Legacy Parks and Pyxl’s websites, as well as at akcllc.com/ten, and will be discussed on WDVX’s Blue Plate Special that day, where Morris will perform.