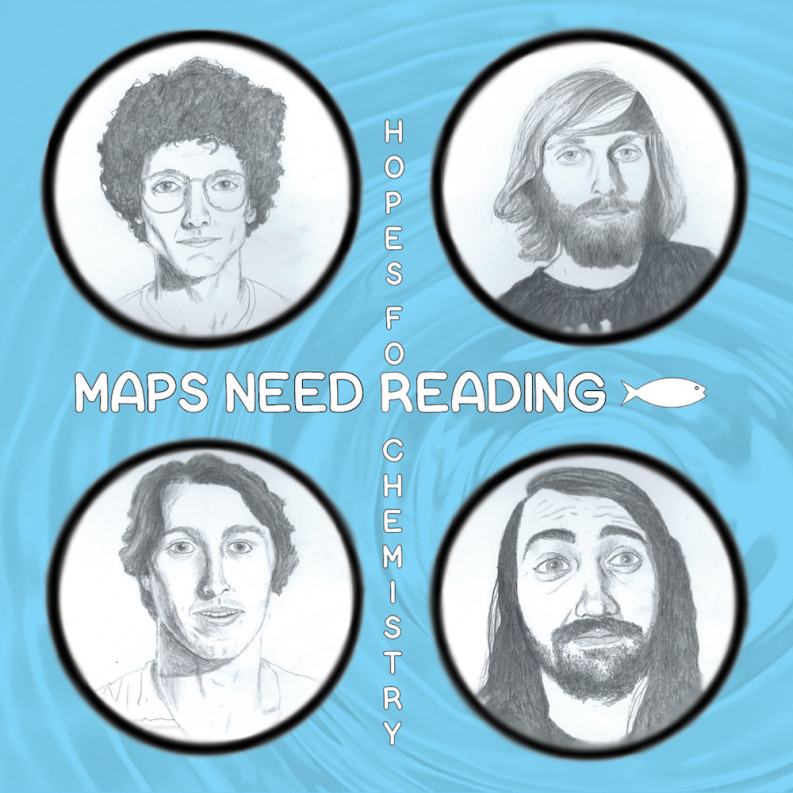 Maps Need Reading
Hopes for Chemistry
“Morning haze, one hit more,” Maps Need Reading sing on their debut EP. It’s a pertinent tagline for Hopes for Chemistry, four tracks of psychedelic emo-jazz well-suited for a post-midnight munchies run. The quartet has been a staple of Knoxville’s progressive music scene for the past four years, building a faithful following based on the quirkiness and intensity of their live shows. But by revamping their lineup (with new drummer DJ Young) and hitting the studio (with Lines Taking Shape’s Paul Seguna), Maps sound like an entirely new band in 2015—harnessing that early potential with electrifying results.

“My Sister’s Husband” opens the EP with a storm cloud of jazz-rock elegance, bolstered by the call-and-response melodic accents of guest players Hunter Smith (saxophone) and Tylar Bullion (trombone). That sultry atmosphere trickles throughout the set—lurching into heavier prog rock on the epic, nearly instrumental “Pickle Mansion” (inspired by a 100-year-old house) and Zappa-esque funk-fusion on “Speak in Beeps,” which channels the angst of watching a close friend morph into a robot, figuratively speaking.

Seguna’s lush, live-sounding production gives Maps muscle and clarity, highlighting the band’s bold dynamic shifts. And it’s a trip surveying their continued sophistication—compare the scrappy early demo version of live staple “Two Yellows” with the jazzier, more nuanced version that appears here. As individual players, their changes are startling: Guitarist David Webb flaunts his jazz-guitar training throughout the EP, like on the trippy mid-section of “Pickle Mansion,” and Young’s textured drumming, captured by Seguna in a stereo-panned mix, is the sonic glue holding it all together.

Maps have already started working on their debut LP, a wacky-sounding concept album about “personified machines and appliances.” Until then, we’ve got Hopes for Chemistry—an alluring tease that reveals new depths with each listen.