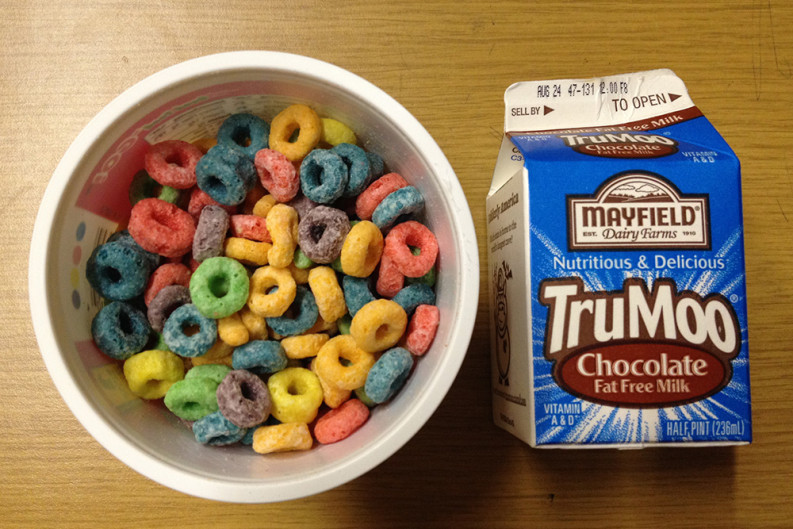 On my children’s first day of school this August, their teachers sent home a letter from Wanda McCown, executive director of school nutrition:

“We are pleased to inform you that Knox County Schools will continue to participate in the National School Lunch and School Breakfast Program called Community Eligibility Provision for the 2015-2016 school year,” the letter read. “All students attending participating schools are eligible to receive a healthy breakfast and lunch at school at no charge.”

Free healthy meals for all students! I was pleased, too. In the past few years I have witnessed chronic hunger among children in my community, and it’s a complicated, never-ending problem. CEP is a provision of the 2010 Healthy Hunger-Free Kids Act that provides funding and guidelines for USDA child nutrition programs. The elementary school my children attend is one of 52 Knox County schools qualified for CEP, which means the majority of the students are low-income, and therefore at risk for chronic hunger.

A 2013 article by National Education Association President Dennis Van Roekel, titled “Students Too Hungry to Learn: A Challenge We Can Solve,” says, “Hunger … affect[s] one in five children, and this problem often plays out in the classroom. Hungry children struggle to concentrate in class, visit the school nurse with daily headaches and stomach aches, and may act out because they are hungry.”

Van Roekel adds that hunger is better addressed by providing free breakfast to all students instead of trying to target at-risk children. When everyone is served free breakfast at the same time, it erases the stigma of being the poor kid who qualifies for government meals, and catches any hungry children falling through bureaucratic cracks.

This is where CEP becomes problematic: My first-grader said she ate grape juice, Cocoa Puffs, Cinnamon Toast Crunch cereal, chocolate milk, and a Blow Pop, passed out by the school as a “welcome back” treat. The third-grader, who passed on Apple Jacks for breakfast, had only chocolate milk and the Blow Pop.

When I voiced my concerns to McCown, she said it is a misconception to assume that name-brand cereals in school meals have the same nutritional content as those on supermarket shelves. For example, regular Cocoa Puffs have 13 grams of sugar per 27-gram serving, but a Cocoa Puffs Bowlpak designed for schools have 8 grams per 30-gram serving. Reduced-sugar Cocoa Puffs have a similar ingredients list to the regular variety, but sugar is moved from the first ingredient to the second, and fructose (fruit sugar) is eliminated. Both reduced-sugar and regular Cocoa Puffs contain corn syrup and, perhaps surprisingly, the caloric content (110) is the same in both.

A 2005 analysis by the Associated Press, “Experts Say No Advantage to Reduced Sugar Cereals,” cites the research of nutrition scientists at five universities to explain why: “To preserve cereals’ taste and texture, sugar is replaced with other carbs that have the same calories as sugar and are no better for you. That’s also why not even diabetics benefit from these cereals. The body treats all refined carbohydrates the same, whether they are sugars or grains.”

Cereals are not the largest source of sugar in school meals. The beverages are. Mayfield’s TruMoo half pint of fat-free chocolate milk, the brand served in one Knox County school, has 18 grams of sugar, with ingredients including corn starch, salt, the thickening agent carrageenan, and unidentified “natural flavor.” The Ardmore Farms 4-fluid-ounce carton of apple-grape juice from concentrate has 13 grams of sugar.

A Blow Pop has 12 grams of sugar, bringing the total first-day-of-school sugar intake for one first-grader to 59 grams. The American Heart Association recommends active children ages 4-8 should limit added sugar intake to 12 grams or 3 teaspoons per day. Fifty-nine grams, or almost 15 teaspoons, exceeds that recommended allowed by a lot, and it was only a half-day.

In 2009, pediatric endocrinologist Robert Lustig’s lecture, “Sugar: The Bitter Truth,” went viral, bringing widespread awareness to an issue nutrition scientists had been publishing research on for decades. Simply, eating too much sugar has serious health consequences, and nearly everyone in America eats too much sugar. Lustig’s research found direct links between diets high in sugar and certain cancers, obesity, diabetes, high blood pressure, and heart disease.

Lustig’s findings are reinforced by a slew of other studies on the effects of sugar on the body, probably the most well-documented being tooth decay. In a May 2012 paper “‘Metabolic syndrome’ in the brain,” UCLA scientists found excessive sugar consumption may damage cognitive health as well,leading to dementia later in life. Because too much sugar impairs the function of insulin in the brain, some scientists are calling Alzheimer’s disease “type 3 diabetes.”

Paradoxically, low-income children are at risk for both chronic hunger and obesity, and part of the reason why is found in the sugary, empty-calorie, food-like substances poor children are fed. According to the Center for Disease Control and Prevention, over one-third of children are overweight or obese. Twice as many children are overweight today than were 30 years ago, and four times as many adolescents. Spending one’s whole life overweight equals living with a host of health problems. The CDC lists cardiovascular disease, diabetes, bone and joint problems, heart disease, osteoarthritis, sleep apnea, many kinds of cancers, and social problems like stigmatization and poor self-esteem.

McCown says all school meals follow state and federal guidelines. In recent years, Knox County’s schools have attempted to take healthier steps such as replacing whole milk with reduced-fat milk, and replacing all cereal with whole-grain cereal. On some days, students can choose cinnamon rolls, sausage biscuits, or mini-pancakes, all pre-packaged. Troubling substances listed on their box labels include fully and partially hydrogenated cottonseed oil and mono- and diglycerides. These trans fats are consistently linked to heart disease, America’s number-one killer of men and women. The cinnamon rolls and mini-pancakes also contain sugar.

Switching the chocolate milk from whole to low-fat does not address the more serious sugar problem. The school makes plain low-fat milk available in the cooler beside the chocolate milk, but the sugary milk is hard for children to resist. Many experts consider sugar to be a drug, and children are amateurs when it comes to impulse control. Making healthy choices is especially difficult for children experiencing chronic hunger.

This passage from “Evidence of Sugar Addiction,” a 2008 paper by Nicole Avena, et al. published in Neuroscience and Biobehavioral Review, describes a study in rats that mirrors the situation of a child who doesn’t get enough to eat at home and depends on school for regular meals, especially breakfast.

“In this animal model, rats are food deprived daily for 12 hours, then after a delay of four hours into their normal circadian-driven active period, they are given 12-hour access to a sugar solution and chow. As a result, they learn to drink the sugar solution copiously, especially when it first becomes available each day.”

The results of the study are significant, considering that the chemical dependency developing in the brains and bodies of these lab rats may be happening in our most vulnerable rugrats as well, as they break their fast with sugary cereal and beverages:

“After a month on this intermittent-feeding schedule, the animals show a series of behaviors similar to the effects of drugs of abuse. These are categorized as ‘binging,’ meaning unusually large bouts of intake, opiate-like ‘withdrawal’ indicated by signs of anxiety and behavioral depression and ‘craving’ measured during sugar abstinence as enhanced responding for sugar.”

There is no other drug that we allow our children access to in such quantities. In most households, alcohol, tobacco, and even coffee are put on the high shelf. The most touted feature of the program, that it applies to all students, also has a drawback: Parents can’t control their children from tanking up every school day on sugary unhealthy foods. Children that eat a healthy breakfast at home are eating a second dessert-breakfast at school. As for at-risk children, after a meal of Cocoa Puffs and chocolate milk, they are no longer hungry, but may be too wacked out on sugar to pay attention in class. Though well-intentioned, the public school does a disservice to their students by hooking them on name-brand sugary cereals and prepackaged food heavy on the trans fats.

Why are there no cheap, healthy in-house cooked breakfasts? Why doesn’t the cafeteria whip up a big vat of oatmeal in the mornings? Here’s something you may not know: The Knox County school my children attend doesn’t have spoons. Students peel off the top of their plastic Bowlpak and eat the cereal with their fingers, washing it down with swigs from their paper carton of milk. I’m glad for all the plastic spoons saved from the landfill. Still, the set-up lends a sad kind of jail-yard depravity to the meal.

The Knox County School Nutrition department spent most of the 2014-15 academic year in turmoil as Executive Director Jon Dickl found himself embroiled in a scandal involving misuse of funds; he resigned shortly before Superintendent Jim McIntyre was set to fire him. Though she’s worked in school nutrition for over 30 years, McCown is brand new as executive director. CEP, which became available nationwide in 2014, is a fairly new program, and the 2015-16 school year is young. Knox County School Nutrition has the opportunity to rise above recent troubles to become a program of quality and substance.

Already there are encouraging signs. Teachers have a modicum of discretion over the food coming into their classrooms. The first-grade teacher I spoke to requested that chocolate milk not be sent to her room, eliminating temptation and guiding her students to the healthy option of plain milk. Also, on the second day of school, the cafeteria served the superfoods blackberries and blueberries beside the pizza at lunch, with plans to incorporate more fresh fruits and vegetables into their meals.

All nutrition experts worth their salt know that healthy meals have fresh fruits and vegetables, eggs, lean meat and fish, fiber-rich whole grains, and dairy without added sugar. Food writer Michael Pollan points out that junk food often comes plastered with health claims on the packaging, while real healthy foods, being whole foods, do not (see for example, real apples v. Apple Jacks).

We need to be honest: Reducing the sugar content by a few grams in artificially colored and flavored breakfast cereal does not transform it into a healthy meal. Prepackaged cinnamon rolls and chocolate chip pancakes containing trans fats and a long list of preservatives and additives are not healthy meals. Knox County needs to eliminate these unhealthy options from their classrooms and cafeterias if they hope to encourage children to eat truly healthy foods.

Get rid of the Froot Loops; a legitimately healthy alternative could be whole-grain toast with butter, fresh fruit, and a carton of plain milk. The logistics of providing such a meal may be challenging, and children are not always grateful for healthy food. But if students don’t eat it, the school can rest assured these are not the chronically hungry children CEP means to target. Children are survivors, and if they are hungry they will eat a healthy meal in front of them. Sugary, empty-calorie options sabotage students’ opportunity to learn to like healthy foods—as well as their future health.

If the Knox County Schools system says they are going to provide healthy meals to their students, then they should follow through on their promise. The CEP program has the potential to do much good, but that will require unwavering commitment to quality on the part of the adults.

Corrected: In a previous version of this column, a “September 2012 paper, ‘Food for Thought: Eat Your Way to Dementia,’” was cited. However, that was actually an article in New Scientist. The correct paper Eleanor Scott meant to reference is “‘Metabolic syndrome’ in the brain.”