The University of Tennessee: The Trip to the Hill - The Knoxville Mercury 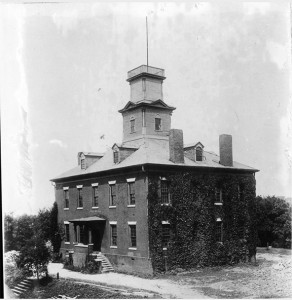 Old College, the first building on campus, was built in 1828 and torn down in 1916, to be replaced with Ayres Hall.

The University of Tennessee traces its beginnings to 1794, before Tennessee was even a state. But behind that founding date, which gives UT a claim to be one of the nation’s oldest public universities, is a story of stressful decades when the tiny college almost ceased to exist, changed its name and its campus, and only through the tenacity of a few determined scholars and supporters, held on by a thread.

In its early years, Samuel Carrick (1760-1809) was the college’s president and only instructor. Originally from Pennsylvania, but educated at Virginia’s Liberty Hall Academy, Carrick came to Knoxville and started a local “seminary” in 1792. The young scholar’s brief experience was apparently impressive enough to convince the legislature of the federal Southwest Territory to establish a college.

It was named Blount College for William Blount, who was then the territorial governor of the Southwest Territory. Blount himself was among the college’s original trustees, as were John Sevier, James White, Archibald Roane, William Cocke and several other pioneer leaders.

Samuel Carrick is also credited with founding Knoxville’s first church, First Presbyterian. Back then, most colleges were affiliated with Christian denominations. Despite Carrick’s vocation as a Presbyterian minister, Blount College has been claimed to be America’s first non-sectarian college.

In 1795, Blount College occupied a two-story frame house “designed to accommodate 40 scholars” near the corner of Gay Street and Clinch, later the location of the Tennessee Theatre. Carrick wasn’t as handy at finding a building for his church. Hence, Knoxville had a college long before it had a single church building.

The fact that five girls were once enrolled is the source of a thin claim that Blount College was America’s first “co-educational” college. However, historians believe the girls were likely in a preparatory, not collegiate, program.

One alumnus of Blount College, Clement Clay (1789-1866), later became an Alabama governor and a U.S. senator. He graduated in 1807, just as BC was being renamed East Tennessee College, reflecting the region it served.

After staying up all night to finish a sermon, Carrick died suddenly, at the age of 49. He was buried in the graveyard across the street from his college.

Its trustees attempted to reopen ETC with a fundraising scheme based on a lottery, and appealed to former President Thomas Jefferson for help.  Jefferson responded that he disapproved of lotteries. But he offered some free advice, that the struggling college in Tennessee spread out on a campus, an “academical village” composed of small buildings for each subject, arranged around a common square.

East Tennessee College remained closed for more than a decade, during which Jefferson started his own college, the University of Virginia. After Knoxville lost its status as state capital, Carrick’s college might have seemed fated to be forgotten. However, it reopened again, thanks to David Sherman, a Yale grad who had come to Knoxville to be principal of Hampden-Sydney Academy, a local private boys school named for the well-known Virginia college.

When Sherman resigned in poor health, ETC hired Charles Coffin, a Harvard alumnus who had been president of Greeneville College (later Tusculum) to lead the struggling school. He began planning a move to a permanent campus.

East Tennessee College settled on what was known as Barbara Hill, then just outside Knoxville’s city limits, citing the adjacency of Second Creek and “the main western road” as advantages. It was “near, and yet secluded,” ideal for scholarly pursuits.

When builders broke ground for the first building, men with shovels were surprised to find human bones. They had dug into a cemetery that was only 30 years old. A prominent early military commander was buried there, but Knoxville’s population was so transitory at the time that few people remembered it.

There atop the Hill, they built the new campus’s first building, in 1828. Built of stone and brick, with an observatory and belfry, it would become known as Old College.