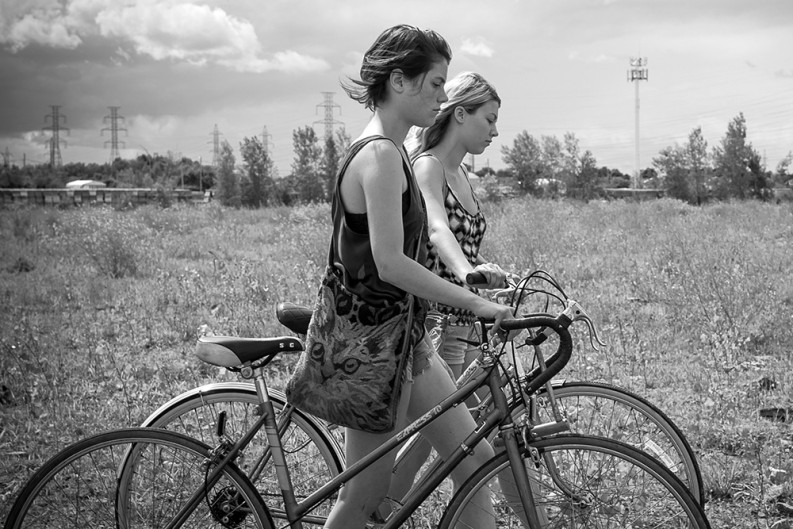 Films about bored, aimless youth aren’t particularly few or far between. Reluctant adults and their non-adventures have had a sub-genre to themselves since the independent film boom of the 1990s, and have become something of a default since digital video made filmmaking an outlet for actual bored, aimless youth. So why do so few of them have anything interesting to say about it?

If the answers seem obvious—that boredom is boring, and lack of direction isn’t much of a narrative virtue—then Knoxville’s Public Cinema is happy to counter with Tu Dors Nicole, the Québécois wonder that kicks off their 2015 International Currents series at the Knoxville Museum of Art. A sleeper favorite on this year’s festival circuit, Stéphane Lafleur’s breezy slice of post-collegiate drift draws on the same tics and tactics as any given mumblecore joint but adds them up into something rather different. It’s nothing too meaningful, really, but it’s beautiful and true.

Recently released from university into the wilds of summer, 22-year-old Nicole (Julianne Côté) doesn’t seem driven to do much beyond sorting thrift-store donations and wasting time with her best friend, Véronique (Catherine St-Laurent), at ice-cream stands and mini-golf courses. With her parents gone for the season (along with pretty much any other identifiably adult figure in their small town) Nicole settles into the peace of an empty house only to have it broken by her brother, Rémi (Marc-André Grondin), and the two other members of his post-punk band, who plan to spend the summer recording and bickering.

With few exceptions, this basic setup stands in for any real plot. The film’s title translates to You’re Sleeping, Nicole, but, despite the occasional harp music, it has much less to do with dream logic than it does with the comfort of safety and low stakes. (One fabulous exception: a thoughtfully surreal running gag involving a smitten preteen with the voice and relative wisdom of a grown man.) Other stories might hinge dramatically on Véronique’s lusty geriatric boss or the misunderstanding of an unsolicited credit card that spurs Nicole to book her and Véronique an international vacation. Here they’re softly comedic vignettes strung together in service of pillowy punchlines, and the effect is wryly pleasant.

A lot of that is to do with Lafleur’s craft, and the performances he gets from his young cast. Tu Dors Nicole has drawn no shortage of comparisons to Noah Baumbach’s Frances Ha, but Greta Gerwig’s abrasive, vivacious Frances is very little like Côté’s Nicole, whose sulks and smiles fade in and out of each other rather than snap. Nicole’s beautiful 35mm black-and-white photography, on the other hand, lives up to the comparisons, even as Lafleur pursues a more laconic tone. His witty, generally static visual composition and Organ Mood’s twinkly soundtrack synths are nothing too far out of the ordinary in twee independent cinema, but the lackadaisical mood diffuses their effect. This is a film that should play as pretentious to American eyes and never does.

And that’s just the broadest of the expectations Tu Dors Nicole quietly undermines. (The narrowest: Rémy’s band is actually really good.) By the time an emotional momentum emerges in the final act, Laferve has trained the audience to ditch the guessing game. Nicole’s credit card doesn’t max out at a crucial moment. A mysterious emergency kit (“When does a situation become an emergency?” “Usually you know.”) plays the least consequential role in an otherwise offscreen emergency. There’s even a scene of implied danger that shifts abruptly from creepy to adorable.

In the end, this narrative nonchalance is an asset, not just a charm, as various threads of Nicole’s sleepy summer finally culminate in actual drama. Plans are broken, assumptions are challenged, and flirtations go the wrong way; these things all play out as you may have suspected all along, but so loosed from structure that their effect can’t really be looked on as plot, but simply the jolt that awakens Nicole from the slumber of extended adolescence. It wouldn’t be uncharacteristic for her to lie in bed a while longer, but her eyes are open.