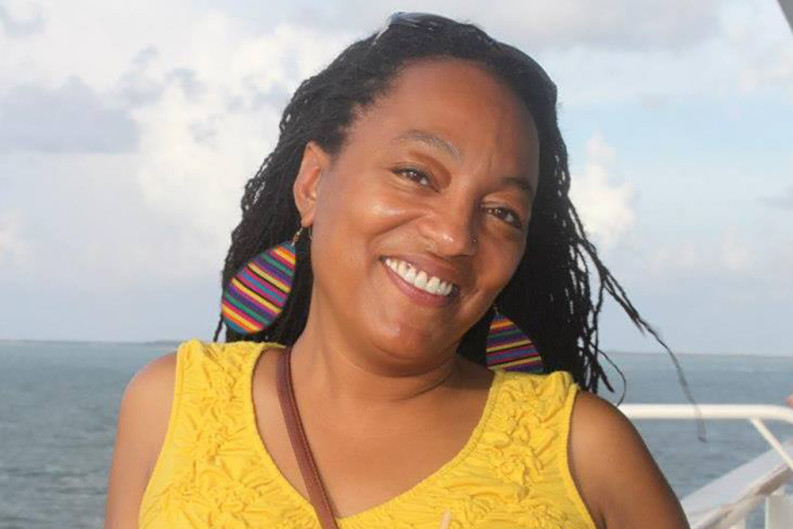 The host of Mood Music with Margo Miller airs her show on the new community radio station WOZO LP, Tuesday nights from 7 p.m. to 9 p.m. on 103.9 FM. The show’s playlist depends on Miller’s mood.  The station is based in the Birdhouse community center.

How does the station work?
It is volunteer DJ-operated, with no advertisements. Some DJs are a lot more tech savvy than I am and record their shows and post them on online. I’m not there yet. I hope to get there soon. Each DJ pays dues or does work, and we run PSAs. We operate on consensus, and in order to become a DJ, three existing members have to vouch for you after you have attended two meetings. We are currently raising money so we can stream, which will cost close to $1,000 and involve some paperwork. We are a low-power station, which means there are several areas in Knoxville unable to get our signal. Once we can stream, we will truly be Knoxville’s community radio station.

What’s most fun about the show?
Sharing music with the listeners and also listening to the music before putting the playlist together. I truly love all music. I get that from my dad. He introduced me to a variety of music. As a kid, I would sit on the floor, with oversized headphones listening to his album collection, which he has since passed on to me. I can hardly wait until we get the proper equipment to connect the turntables, ’cause I will be building playlists from my ’70s and ’80s LP collection.

What’s your favorite tune you’ve spun so far?
“Mississippi Goddam” by Nina Simone. Most folks pulled that song when she first did it and some folks wouldn’t book her. I felt so rebellious!

Could you truly be in any kind of mood for the show?
I could. I like to go more with themes than types of music, so I can play a little bit of everything on the show—Latin music, bluegrass/folk, and spoken word have made it into just about each of my shows. I’m not too sure about heavy metal. I don’t own any so it would be hard to put that on a playlist.

Who’s the biggest influence over your musical taste?
Oh my! There really are too many to name. I’m an old soul, though. My musical heart is in the late ’60s and ’70s. Marvin Gaye, Stevie Wonder, Aretha Franklin, Eartha Kitt, Nina Simone, Motown, Paul Simon, Santana.

Do you admire any current or past DJs?
I admire all of my fellow DJs on WOZO! I’m also a fellow UT alum and fan of DJ Sterl The Pearl. I’ve always been amazed at the level of energy he brings every time and everywhere he plays. I’ve never been a big radio music listening person—more of an NPR listener and stuff from my dad’s collection. But I really enjoyed the music shows on television: Soul Train, Grand Ole Opry, Lawrence Welk, and American Bandstand.

Were you ever a superfan in, say, middle school?
I remember singing to the top of my lungs, over and over again, annoying my cousins by singing “Breaking Up Is Hard to Do” by Neil Sedaka. I was way too young to even know what breaking up was, but I loved that song. Also, the Monkees caught my attention because they had a television show. And I am sad to report in middle school I had a crush on Elvis Presley.

Did you have a poster in your room?
No posters in my room growing up. However, I do have a huge poster of Lenny Kravitz and Prince hanging up in my house now.

What was the first bit of music you ever purchased, and in what format?
It was the Jackson 5, one of the little 45s.

What kind of music played on your last long road trip?
That was with a good friend of mine and we listened to an Old Soul music station on satellite radio. We sang along to each and every song. I hope to put my hands on some that music, ’cause that is a mood I’d like to be in and share real soon.

Where did you pick up DJ skills?
I am actually a broadcast communications student from UT. I worked at WUOT for a good bit. It was a lot of fun. Back then, I did more production that I do now. I knew the equipment and how to use it. I’m a little behind now, but some of it is coming back to me. And I enjoy how portable music is now.

Did you help formulate the station?
I’m the executive director of the Appalachian Community Fund, which is one of three organizations whose names are on the license. United Mountain Defense Fund and the Neighborhood Center are the other two. Shortly after President Obama announced that he was going to have the FCC release the last of the low-power FM stations, we came together and organized an information meeting, encouraging folks to apply. A lot of our DJs come from those early meetings. We were officially granted our license May 21, 2015 and have been on the air since late June. At first I didn’t want to do a show. A fellow DJ encouraged me, said, “There needs be more female voices on the station.” I’m glad I listened to him, because I’m having a blast.

What’s your goal with the show?
I want to have guests who will come on and chat about some of the songs and how they feel about the mood. I’ve also got a few ideas for recurring 15-minute breaks to round out the show, like “Gardening with Gina,” or “Writing with Friends” readings, or “Hot Topics From the Region.” I would love to be able to promote some local musical talent and support the existing music scene. But mostly I see this as a perfect opportunity to have a wonderful time, maybe dance a little, sing a little—and I don’t have to worry about kicking people out or cleaning up after the party is over.

Email the show at moodmusicwithmargomiller@gmail.com