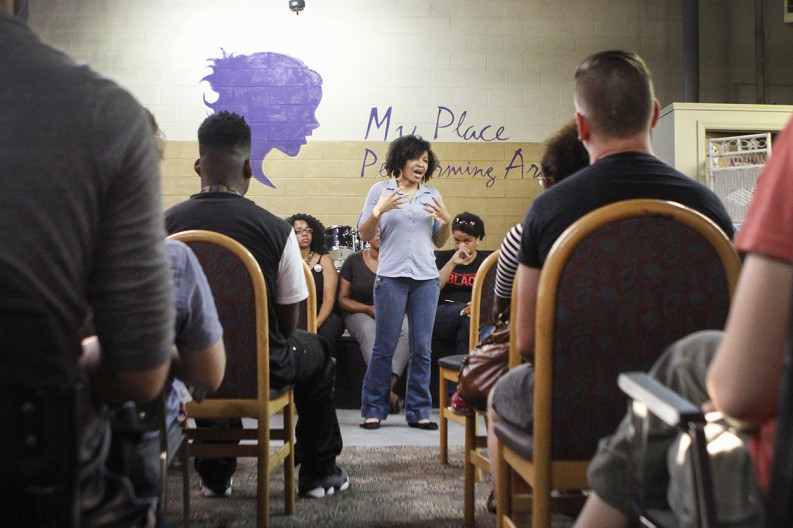 Drawing inspiration from the civil rights movement of the 1960s, a local group of activists is aiming to reignite dialogue in Knoxville’s black community over issues of race, economics, and other factors impacting African-Americans.

“We want to take the reins and carry on the work of our forefathers before us in the civil rights movement,” says Andre Canty, one of the more than half-dozen organizers behind Black Lives Matter Knoxville, a local rendition of the national Black Lives Matter movement.

Canty and others are aiming to latch on to that national movement to ferment change locally. Many involved have traveled to other cities to take part in demonstrations, workshops on social organizing, and to network with other activists following fatal police encounters that claimed the lives of unarmed black men in Ferguson, Mo. and Baltimore, among other cities.

“These places are our Birmingham and our Selma (Ala.) of the ’60s and ’70s, so we like to go out to places and report back to people about what they’re experiencing (there),” Canty says. “It really gives a sense of how urgent things are and what we should do here, though it’s less about responding and more about being proactive.” That goes beyond issues of police or state violence, he says, to include systemic problems such as the school-to-prison pipeline.

The first official meeting of BLM Knoxville last week drew a standing-room only crowd of 80-plus people to My Place Performing Arts Center in East Knoxville. Most immediately, the group hopes to convene more black people to discuss black issues and plot a path forward. During the meeting they asked that only blacks sign up for a mailing list to receive future information about BLM Knoxville, but encouraged people of other races—which made up more than half the crowd—to get involved in the fight against racial injustice in other ways, such as joining the group Knoxvillians Against Injustice.

Coy Kindred, one of the event’s organizers, said that tactic was an effort to establish a “black space” where folks could have frank conversation about serious issues, something currently lacking in Knoxville. One African American woman in attendance said she felt a blacks-only group to discuss issues of racism and other factors impacting her community was needed, noting: “I appreciate having a lot of allies (of different races), but honestly I feel like I’m shut down a lot of times when I try to talk about race in Knoxville.”

But some Knoxvillians with ties to the original civil rights movement lent words of caution after hearing the group was segregating along racial lines. Theotis Robinson Jr., a retired vice president of equity and diversity at the University of Tennessee who participated in marches and lunch counter sit-ins in Knoxville during the 1960s, says that movement for social change would have never proven successful were it not for blacks and whites working together.

“Ultimately, I think people coming together is how you really bring about change,” Robinson says. “You need help from all quarters and not to do that is counter-productive to what you say your cause is. You have to get away from that kind of contradiction. It’s divisive.”

Robinson was unaware of the fledgling Knoxville branch of BLM or its goals, but says that he sees the movement overall as a continuation of the civil rights struggle. Driven largely by grassroots organizing and social media, BLM was born from the #BlackLivesMatter hashtag and IRL actions that took root following the shooting death of Trayvon Martin in 2012. Over the past year, it has swelled into a national campaign with offshoots in dozens of cities and states around the country. It regularly makes headlines earning celebrity endorsements, crashing political rallies, and taking to the streets to demand accountability for police and others involved in deadly confrontations.

“There are a lot of people mobilizing to say yes, black lives matter,” videographer Jasmine Newton told the Knoxville crowd last week. “You have a lot of allies. There are groups like this all over the place.”

While the recent gathering marked the first formal meeting for BLM Knoxville, there have been some past #BlackLivesMatter demonstrations in Knoxville. A protest was held at the intersection of Morrell Road and Kingston Pike on Dec. 14 last year, and on display during the meeting was a video shot during the Week of Righteous Resistance on July 23. Local organizer David Hayes recounted his recent experience attending a national Black Lives Matter conference in Cleveland where he and dozens of others had a run-in with police after officers arrested a 14-year-old boy off a bus nearby. Police have said the boy was under the influence of alcohol, but Hayes maintains the young man—who was not affiliated with the conference—was sober. That encounter made national headlines when a transit cop pepper-sprayed a crowd of people attempting to encircle a police cruiser to stop the boy’s arrest.

A good portion of the group’s first meeting involved hearing ideas from people in the crowd about pressing issues facing the black community, what they envision for BLM Knoxville, and what sorts of action or changes they’d like to see locally. Ideas ranged from limiting the number of liquor stores allowed to operate along Magnolia Avenue to potentially putting forward a candidate for local political office, such as mayor or City Council. Other ideas included pushing for more black history to be taught in schools, finding ways to hold law enforcement and politicians accountable for their actions, spending one-on-one time with kids in the community, fundraising for school supplies or other needs, and making people in general more aware of black culture.

Toward the end, organizers encouraged those who proposed ideas to step up and be a leader in that area, whether backing a new political candidate or just informing more people about the group and what it hopes to accomplish. Learn more about the group and future meetings on its Facebook page.