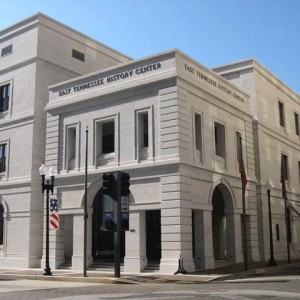 The East Tennessee Historical Society has a deep history of its own.

It dates back to the presidency of Andrew Jackson. In 1834, physician J.G.M. Ramsey (1797-1884), journalist and cleric Thomas Humes, sometime Congressman John Crozier, Judge William Reese, future president of East Tennessee University (later UT), and others founded what was originally known as the East Tennessee Historical and Antiquarian Society, to find and preserve documents of the original settlers, who were dying off. “The task of rescuing from oblivion the early history of Tennessee” was, they declared, an “emergency.”

As the ETHS’s “recording secretary,” Ramsey kept the collection at his own home just east of Knoxville, at Forks of the River. Thanks to what he’d found, Dr. Ramsey became one of Tennessee’s leading historians, author of Ramsey’s Annals of Tennessee, first published in 1853.

The Civil War split the ETHS. Humes was one of Knoxville’s strongest Unionists, while Ramsey, an outspoken Confederate, left town during the Union occupation. During his absence, his house burned down, allegedly the victim of rogue Union troops. Most of the society’s collections disappeared with it.

That second ETHS organization apparently didn’t survive into the 20th century. But a few of its members were still alive in 1925, when the ETHS was re-founded by librarian-editor Mary Utopia Rothrock (1890-1976), writer Laura Luttrell, UT President James Hoskins, and others, in association with the then-new Calvin M. McClung Historical Collection, part of the Knoxville Public Library. This time it lasted.

In 1928, the ETHS began publishing a historical journal, now known as the Journal of East Tennessee History. Over the years, the organization has published several books. The French Broad-Holston Country, edited by Rothrock in 1946, is still the most complete history of Knox County. Heart of the Valley, published in 1976, by editor Lucile Deaderick, is an invaluable resource about Knoxville proper. After some years of focus on the Knoxville area, the ETHS deliberately expanded its focus to more evenly cover its 35-county region.

The ETHS acquired use of the old post office, or “Custom House.” Built in 1874, it was a building well known to Ramsey, Humes, Crozier, the founders of the original organization. The McClung Collection and Knox County Archived were moved in by 1982.

Plans to start a museum there, first announced in 1986, took flight in 1990, with authors Wilma Dykeman and Alex Haley helping to promote it. A small museum first opened in the Custom House in 1993. A major architectural addition in 2004, designed by Knoxville architecture firm Barber McMurry, almost doubled the size of the Custom House and allowed a major expansion of the History Center, reorienting the entrance to Gay Street. The ETHS’s permanent “Voices of the Land” exhibit, larger than the previous museum, opened almost exactly seven years ago, and has been seen by thousands. Last month, the ETHS museum earned a positive recommendation in the New York Times, from travel writer Seth Kugel.