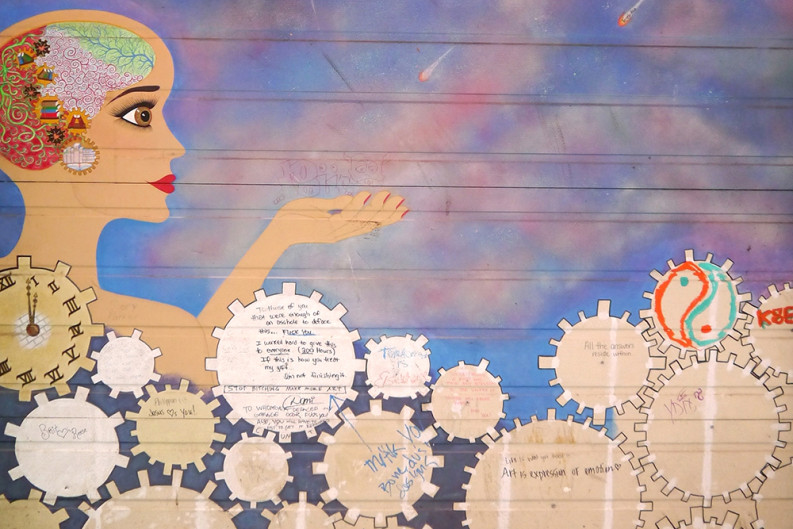 It’s a Tuesday afternoon much like any other downtown—slow, sparse, with most people driven indoors by the summer heat or their office jobs. There are no farmers’ market stands to beckon passersby, no food trucks, no bands assembled on the stage. Yet even at this languid hour, strolling couples and vacationers intermingle to admire Strong Alley’s brightly painted murals, mostly the work of local artists. The brainchild of Jayne McGowan, the alley became a mecca for street art after the birth of the Artist Alley Revamp Project in 2012, with a similar alley since sprouting up in the Old City.

“I never thought that with my degree in fine arts that I would be curating an alleyway—I always wanted to be over at the museum,” McGowan says. “But this is so much fun because it expresses so much of our community, and it shows people visiting here that, hey, we’re kind of groovy.” 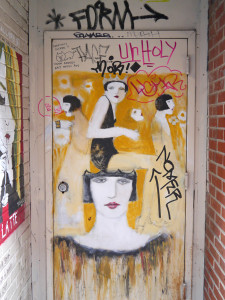 But while the murals testify to Knoxville’s creative pulse, they also show evidence of a clash between conflicting cultures. Street and graffiti artists often vie for the same turf, and in a public space like Strong Alley, that conflict is being graphically expressed for everyone to see.

“Give them time, and people always come and ruin your work,” says Cynthia Markert, the Knoxville-based artist well known for her portraits of flapper-esque femmes.

“There was this one guy who was a cartoonist who would screw with my eyeballs and put mustaches (on the women),” she says. “So I wrote, ‘Please don’t mess with mine, I won’t mess with yours.’ I came back and he’d taken a Magic Marker and written ‘slut’ and ugly words all across their faces, and ‘Weep Cynthia.’ It was just hateful.”

“It gets to be a free for all, which is the case with street art,” Markert says. “People just come and start doing stuff.” 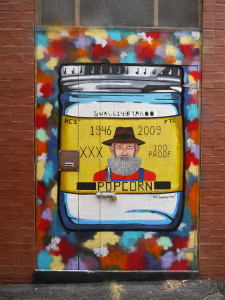 Muralist Cody Swaggerty says that peoples’ attitudes toward his Strong Alley work, which includes a vibrant goldfish and mammoth jar of Popcorn Sutton Moonshine, have been basically appreciative and respectful. He still, however, dreads finding one of his pieces marred.

“Every time I go (to Market Square), I have to go to the alley and check it out because I’m always wondering if something is going to happen to them,” he says. “I’ve had a few things get messed up and I’ll go back and fix it or do something totally different, because I put my name on that stuff.”

Swaggerty, who has picked up several jobs through people seeing his work in the alley, fears others’ defacements could reflect poorly on him.

“You’ve got to spend money to go down there to do it, but for me it’s worth it getting feedback from people and exposure and practice,” he says. 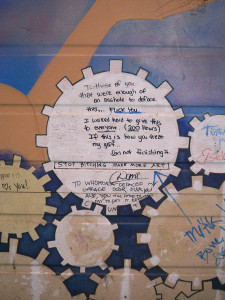 One mural, featuring a cosmic sky and upturned face, has become a very public forum for debate concerning a street artist’s right for their work to remain unsullied, much to the chagrin of its artist.

“To those of you that were enough of an asshole to deface this… fuck you. I worked hard to give this to everyone (200 hours). If this is how you treat my gift… I’m not finishing it,” reads a message from the unidentified artist.

Several Sharpie-armed passersby have weighed in on this stance.

“If you wish to make public art, accept that it will be public property,” wrote one dissenting commenter, while another scribbled “Stop bitching, make more art.”

“Such a shame people have no respect for such magnificent art,” contended another.

A portrait of the late musician Phil Pollard—widely hailed as a local hero in the music scene—now includes a mustache and the word “bitch” scribbled over his left cheek. 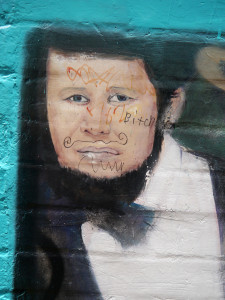 McGowan has grown more accustomed to these unsolicited adornments since seeking the city of Knoxville’s permission to begin the project.

“The first year or two it would upset me. I’d cry,” she says. “But it’s naturally organic in that sense because it’s an outdoor venue, so there’s going to be a tendency for people to do these things.”

Still, McGowan emphasizes it “doesn’t take much” to ask her permission before painting in the alley.

“Some people just want to be seen but not seen, this is what the tagging game is all about,” she says. “Graffiti is a game they play where they come up with their signature and see how many places they can hit and beat out their buddies. A lot of it is destructive, which is really sad.”

But for graffiti artists themselves, this commonly held view feels intolerant and even hypocritical. Some, like local tagger Mark (who would not reveal his real name for attribution), argue that graffiti is no less of an art form than the murals themselves, albeit one that fewer people have the tendency to appreciate.

“It’s very elaborate. If you’re in tune with the art itself, then you can appreciate the hand style as an art (similar to) calligraphy,” he says. “But most people who are business people just see scrawling on the wall, and it’s seen as vandalism. So they don’t necessarily understand the artistic part behind it.”

Subjectivity aside, unwelcome paint, spray or otherwise, is ultimately illegal.

“The city doesn’t make aesthetic judgments on what’s public art and what’s not when buildings are painted with murals or tagged with graffiti,” Communications Manager Eric Vreeland says. “If someone tags private property and didn’t have permission to do so, it would be an illegal act and the artwork would be subject to being removed.”

But the illegality of graffiti doesn’t deter taggers—on the contrary, the inherent risk involved is perceived as proof of a graffiti artist’s dedication to their craft and passion. Those are traits that some taggers, like Paul (who also would not share his real name), believe street artists lack.

“To the people I hang with, street art is more or less a joke,” says Paul, a member of local tagging crew CDK. “They try to do graffiti, but we call them ‘toys,’ which is somebody who doesn’t really know or understand the culture or history. They just kind of jumped into it.”

For those like Paul, a history of vandalism and run-ins with the law are part of a tagger’s street cred, considered to be a vital component of the culture.

“There are a lot of people in the alleyways around here who’ve never been in the street at all—they just do it for the fun of it,” he says. “Whereas me and a lot of people I hang with are addicted. It really is an addiction. Risking life, limb, and jail time, just to put up a name.”

A “man versus machine” mentality is a driving force for taggers, confirms Mark, who once manifested this analogy quite literally by tagging the City County Building.

“It’s a cat-and-mouse game. That’s half the fun of graffiti, that it’s illegal,” he says. “It’s almost like art and sport put together.”

Another key component of graffiti culture is an understanding of the art’s ephemeral nature. A street artist’s expectation for permanency, Paul says, is a sign of privilege.

“It’s like high school. You had your friend that had to work their way through it and buy their own car, then you have your friend that was handed a car by their mom and dad,” he says. “You’re not really jealous, but you don’t respect them at all. There’s no respect for them having their medium in a controlled environment whereas we had to everything the hard way.” 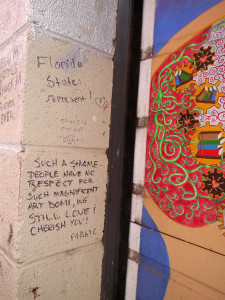 But to assume all artists’ whose work resides in the alleys are established and privileged is inaccurate. McGowan has collected donated paint so the homeless, including a Vietnam veteran, can participate.

“This is what I wanted—for everyone to have fun back here,” McGowan says. “I don’t care who you are. I just make sure inappropriate content isn’t going on, because we might have kids who want to come through here, too.”

Still, those like Paul believe no one, including other taggers, has the right to censor public art, or to complain when other members of the public add to it.

“Every time I do a piece, I take a picture. You have to document it and just be happy you’ve seen it,” he says. “If they’re in the game, graffiti is graffiti. Nothing lasts forever.”