Mapless and Meandering: Or, How to Lose Your Bearings on the Little River - The Knoxville Mercury 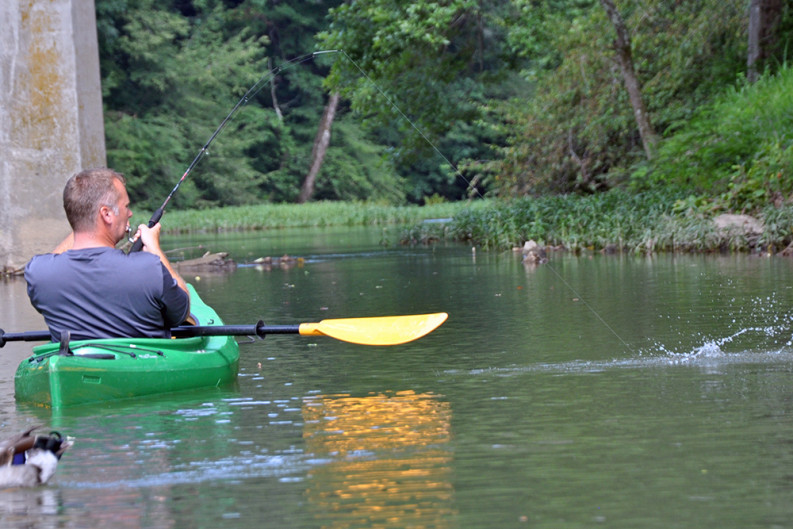 Few would be surprised to learn of my occasional discombobulation while traversing wild places in boats and on foot. Many of you may be acquainted with this affliction. It is nothing to be ashamed of; in fact, extreme discombobulation, which occurred to me on the Little River recently, can produce a peek into an upside-down, inside-out perspective of visionary proportions.

I helped map the Little River for the Little River Watershed Association’s blueway map. I’ve paddled it dozens of times in the last 20 years, and I’ve floated it all downstream of the national park. This qualifies me for absolutely nothing, and what’s more it means even less when a discombobulation occurs.

Drew Crain, a biologist at Maryville College, agreed to accompany me on a rainy day paddle from River John’s Outfitters to the water treatment plant in Alcoa, where we left his truck. I was thinking that a biologist might help to provide some measure of corrective to the abstract tendencies of an English major like me, but Drew, also an LRWA member, said more than once that he’d never been to River John’s in his life and had never paddled the four miles to the water plant. Unspoken translation: He was depending on me to navigate so he could focus on pulling smallmouth bass from the muddy water.

River John, on his porch, said for us to be sure and take the left side of Brakebill Island. On the right, a fallen tree blocked passage.

Did I have the map in my possession? Negative.

For some reason, in my caffeine-jittery brain, I thought we needed to pass under the Wildwood Road Bridge and the Highway 411 Bridge, so after Wildwood, I kept looking for the landmarks that came before 411, which was upstream of River John’s.

Drew would comment on a cool cabin on the shore, and it would look vaguely familiar but oddly out of place. “I’ve never noticed that,” I would say over and over.

At the point of an island where the passages to the right and left seemed equally broad, the current equally strong, Drew said he thought he’d take the right. I did not protest, but I took the left. I would almost always take the left on the Little River.

“Do you have your phone on?” I asked as he disappeared on the other side of the island.

I waited for him in a stand of alligator grass at the tip of the quarter-mile-long island. Thirty minutes passed before he texted: “Tree down. Turning around.” Then I waited another 30 minutes and started to get worried. If he was in trouble, there was no way I could make it upstream against this current to help. Rain fell steadily at this point. About the time I texted him again, he appeared.

This incident produced no enlightenment. Onward I went, looking for a bridge that was now maybe five miles behind me, a couple of miles upstream of where we had put in. Drew, unfazed, kept fishing.

The next landmark was a pretty strong clue that elicited this remark from me: “I’ve never noticed that water intake here. And look, there’s a new boat ramp!” Drew couldn’t hear me because he had again taken the right passage around an unnamed island, while I was on the left.

Only when I saw the guard rail of Martin Mill Pike, a road I used to live on, did I realize that we’d gone past our takeout, the boat ramp I’d just commented on. That’s when the wobbling axis of my worldview got reset into a steady logical groove.

Our next problem in the steady downpour of rain: how to get back to the ramp, a quarter mile away (versus floating on down to Rockford and walking five miles to the truck). We paddled hard against deep water current. We waded the shoals and dragged our boats. I waded ahead at one point, thinking that I could get to the bank to re-embark. Soon I was swimming alongside my boat.

At the point of the island, only 30 yards downstream from our takeout and Drew’s truck, we assessed the situation. The water rushed deep through a chute only a few yards wide, impossible to wade or to paddle against. We had to bushwack across the island, first on a scouting trip, and then with the kayaks, across logs and piles of flotsam and weeds and briars and stagnant pools, to a point upstream of the ramp where we could get into the kayaks and paddle across the narrow chute to the ramp.

“Any snakes in here?” I asked.

I thought I detected a sarcastic tone but didn’t bother to clarify. This was the only way out, snakes or not.

Instead of being angry with me, Drew seemed to find the whole thing amusing, a good adventure (and workout), and he agreed to paddle the same stretch of river at the earliest possible convenience, for better fishing (we hadn’t had a nibble) and for my peace of mind.

“This is a good illustration of why we needed to do that blueway map,” he said.

“And to actually carry it along,” I added.

Our mission on the next try, a few days later: catch fish in the clarified water and become combobulated.

A mallard greeted us at the put-in at River John’s and began to follow us. We were friendly at first, but we did not welcome his attentions after what seemed an abnormal shadowing of our activities. I tossed him a couple of unsalted sunflower seed kernels in an effort to get rid of him, but what I would have considered an insulting handout only encouraged him. He went back and forth from my boat to Drew’s but mostly focused his surveillance on the scientist.

“I’ve never seen anything like this,” said Drew repeatedly. He had eaten an entire sandwich in front of the duck and given him nothing, so there was no obvious reason for his devotion.

Drew caught a smallmouth and two sunfish in the first half hour with a Panther Martin spinner, and I caught a red-eye bass and a pumpkinseed sunfish with my fly rod and a bumblebee popper.

The duck refused Drew’s offer of a sunfish, but he persisted on pecking the decks of our kayaks for whatever processed food we might have. Unrewarded, he would quack in a sort of muttering undertone, as if to himself. This went on for about three miles, through several rapids and narrow chutes. He seemed convinced we had potato chips or cookies or some delicacy he couldn’t find in the wild.

Landmarks, like the small cabin near the right bank, began to make sense. I remembered this structure appearing before the approach of Brakebill Island, and I celebrated our successful left-side passage of the big island with a peanut butter-smeared tortilla. The duck—Albert was his name—motored alongside me so close that I had to constrict my paddle strokes. I tossed a bite of the tortilla toward the bank and he paddled over and gobbled it up.

“Doesn’t he have a family?” I asked Drew.

“Apparently not.” Drew speculated that he might be an elderly duck.

Perhaps Albert, the abnormally friendly duck, was a good omen. Perhaps, as Drew speculated, the duck was a reincarnated fisherman whose job it was to escort mapless, discombobulated paddlers to their takeout. Perhaps we were all brothers in our oddities and in our love of navigating moving water.