Bravo for a Farragut Hotel Redux - The Knoxville Mercury 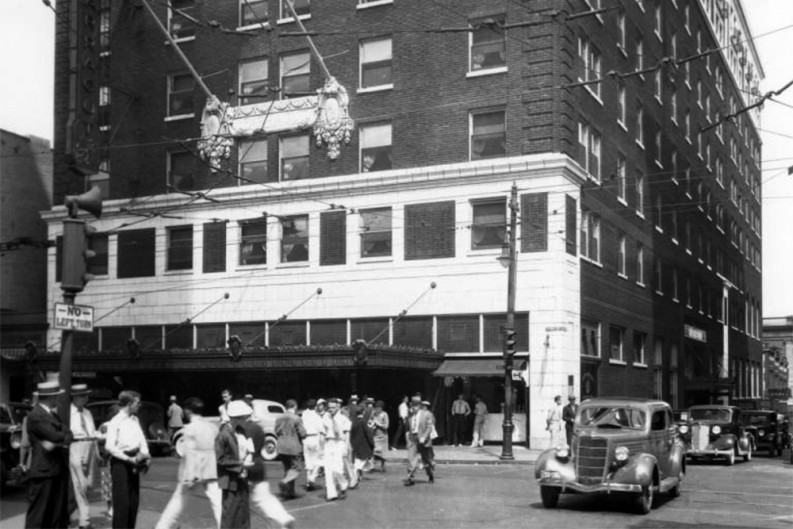 With a lot of encouragement from the city’s business and tourism leaders, not to mention Mayor Madeline Rogero, the Farragut Hotel on Gay Street’s prime corner may be on the verge of springing back to life.

When developer Rick Dover bought the dormant nine-story building last September, its restoration as a hotel wasn’t in the forefront of his thinking. After all, his acquisition for $3.7 million came on the heels of a failed effort by a California-based development team to get financing for a revival of the historic hotel that was Knoxville’s finest when it was built in 1917.

The Knoxville hotel market was anything but robust, and Dover’s development experience was primarily residential, especially assisted-living facilities and other senior housing. But the more soundings Dover made, the more feedback he got that what downtown most needed was a distinctively Knoxville signature hotel that would make the city more appealing to both business and leisure visitors.

Leading hotel brands and a consultant sustained this supposition. And further analysis of downtown’s improving hotel occupancy and room rates led to the conclusion that with some help from the city, the market could sustain a 160-room, $20 million property—half the cost of what the Californians had proposed.

When the unassuming Dover met with Rogero, he got encouragement from her as well. And that has led to several months of intensive discussion with city officials over how to make the project work. The “three-legged stool” of city supports that Dover cites as needed are:

1. Dedicated parking in the nearby State Street Garage—one space per hotel room, for which Dover insists he’s prepared to pay a going rate.

2. A payment in lieu of taxes (PILOT) that would freeze property taxes on the building at their pre-development level for a still to be determined number of years.

3. A federally guaranteed loan that would hold down interest expense on some $2 million of the financing. City officials are said to be optimistic about obtaining such a guarantee from the Department of Housing and Urban Development based on the 80 jobs the hotel would create.

These three components are being packaged for presentation to City Council, perhaps on Aug. 18, and the hotel’s fate will turn on their approval at an early date. If it’s not forthcoming, Dover remains philosophically optimistic. “If it’s going to be apartments, that’s fine,” he says. “I can go that route today if I can’t get the hotel done. But I don’t want to spend another six months wrestling with this because the $3.7 million I’ve got sunk in the building is nothing but a drag as matters stand.”

With early approvals, he foresees work starting by year end toward a hotel opening in mid 2017—a year that would mark the 100th anniversary of the Farragut’s original opening.

The restoration, he proclaims, will be an ”upscale and eclectic mix of old and new and distinctively Knoxville.” The 6,000-square-foot expanse up a few marble steps from the lobby that was the Farragut’s fabled ballroom will be a “fabulous event space for business meetings and social gatherings.” A new elevator bank may well include an express elevator to a festive rooftop with a panoramic view. The design of the guest rooms, of which one-third will be suites, will be dictated by the as yet unnamed “top of the line” brand selected for the hotel, which will serve as a prefix to the Farragut name.

Brands, or flags as they are also known, are essential for a hotel, according to Dover, not just for identity’s sake but also for the “reservations pipeline” they provide. A separate company, known as a third-party manager, will actually operate the hotel as is increasingly common in the industry.

Beyond arranging the financing and doing most of the work on the building with his own construction company, Dover allows that, “Hopefully there will be enough left for us after paying for the branding and third-party management.”

Other elements of the financing include some $3 million in historic tax credits, which Dover is well versed in obtaining, and a conventional bank loan that he is determined to hold to less than $10 million.

City support for the project may draw criticism in some quarters as favoring a new entrant into a competitive line of business. But the proposed backing doesn’t amount to nearly as much as the city recently put into the mall-like University Commons. Moreover, facade grants
to small businesses have become a hallmark of the Rogero administration, along with tax increment financing (TIFs) or PILOTs for nearly every downtown redevelopment that’s come along.

Dover also points out that in addition to creating 80 jobs, the hotel will be shelling out 8 percent of its revenues in hotel occupancy taxes (5 percent to Knox County and 3 percent to the city). Then there’s the matter of filling what’s just about the only decayed tooth remaining in Gay Street’s otherwise pervasive, renascent smile.

Come what may, Dover says, “The city has been wonderful to work with.” In no small part that’s a tribute to his own quantitative and qualitative success with other projects, such as the recently completed renovation of what had been a dilapidated former Oakwood Elementary School and the one that’s now underway to make Old Knoxville High School into a convivial residence for seniors.

Dover is to be commended for taking on the yet more difficult challenge of bringing the Farragut back to life as a hotel.

Joe Sullivan is the former owner and publisher of Metro Pulse (1992-2003) as well as a longtime columnist covering local politics, education, development, business, and tennis. His new column, Perspectives, covers much of the same terrain.