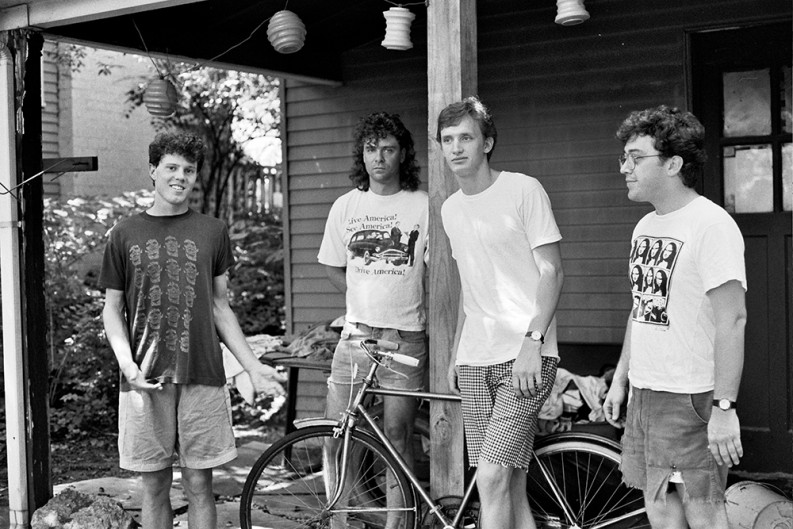 While cassette-only releases may now hold a certain retro charm of exclusivity, for local bands of a couple generations ago it was the most economical option available for getting their songs out to the public. In those pre-Internet/MP3/laptop days, recording and releasing music could be an arduous, expensive process, so cassettes offered the cheaper route of home duplication, even if they weren’t exactly high-fidelity.

Consequently, there is a small swath of Knoxville music history that’s fading from memory as those cassettes either molder or get tossed, and as fewer and fewer people have the ability to actually play them back. However, one crown jewel of the cassette era is being saved with its first proper release: Cholo, by the Taoist Cowboys.

The late-’80s band was part of the first flowering of the modern Knoxville music scene, which went from having a few sporadic successes (say, the Amazing Rhythm Aces) to being a place that could support multiple local bands with a collective of friendly nightclubs and listeners with open ears. Fort Sanders was the epicenter of that scene, and the Cowboys exemplified the “Knoxville sound” of the time: twangy garage rock highlighted by clever songwriting that was nevertheless emotionally revealing. The band’s primary singer/songwriter, Bob McCluskey, was both boyish and knowing, capturing youthful idealism and frustration, often in the same song. Cholo was a collection of the band’s earliest songs with a mix of basement tapes, studio sessions, and live recordings from the Old City nightclub Planet Earth.

Voted one of the greatest Knoxville records of all time by a panel of local musicians assembled by Metro Pulse, Cholo is a remarkable document of a Knoxville band that doesn’t get nearly enough credit for its originality and musicianship—and it will now sound better than it ever did on its original 1990 release. Taoist Cowboys drummer Jeff Bills (who later went on to drum for the V-Roys and nearly 100 other bands) has become sort of a keeper of Knoxville music history, both aural and visual, at his website lynnpoint.com, but it only occurred to him in the past few years to resurrect the original tapes of his early band.

“I really like the arrangements to the songs and all the different parts seem to me to work together,” he notes in an email. “I think the songs have held up pretty well over the years, but ultimately that will be for others to decide. I’m way too close to them.”

You can listen for yourself as he posts the songs on Bandcamp “one a week as I get time.” Even over the prevailing playback systems of today—computer speakers or earbuds—the songs sound superb. Most of them were originally recorded by Kevin Crothers, first in the band’s basement at 2306 Laurel Ave. using his Cutec four-track cassette recorder—a device that also produced recordings for Sea 7 States, Awfully Anglo, and the Home Boys, among other local groups—and then at a downtown Maryville church with his brand-new Tascam eight-track reel-to-reel. (Fun fact: The band’s guitarist, Scott Carpenter, had won a student contest to name Maryville’s downtown in a rejuvenation effort. He dubbed it “Now Town!”) Crothers was a big fan of the Cowboys, going to many of their shows, even the time they played a West Tennessee prom.

“I think that their live hijinks often led ‘very serious people’ to underestimate the Cowboys,” Crothers says. “Despite some silliness, there was a lot of lyrical depth in the songs—especially if you were privy to the back-stories—and the mix of musical influences of the four players made them musically unpredictable.”

That unpredictability led to some creative friction during the recording sessions, but it ultimately led to some timeless Knoxville music.

“Bob and I clashed a few times over getting his musical ‘vision’ on tape—he was coming from a different place musically than I was used to hearing,” Crothers says. “In the end I think we both found a common ground that translated their style into a really good representation of what the band sounded like. I’m proud of the work that we did together.”

Later, the Cowboys won a battle of the bands contest and were awarded professional recording time at Walter Moore’s Planet Studios—and had their original tapes stolen due to a break-in, so all that remained of that effort was a cassette dub. Nevertheless, these were combined with their other sessions to create Cholo.

Crothers kept all of the original tapes in storage until Bills requested them a few years ago and put them in the hands of Bryan Lay, who remixed them all and mastered the Planet Studios material. The refreshed songs reveal a group of guys in their early 20s who nevertheless play with melodic skill beyond their years. Bills and bassist Brad Deaton anchor the chiming, intertwined guitars of McCluskey and Carpenter to form a cohesive sound that’s still intriguing some 25 years later.

“For all the tomfoolery, goofball names, and funny lines, the music is pretty serious,” says Carpenter, now an attorney in the public defender’s office. “At least it seems serious to the guys who are playing it. Bob made guitar lines that are totally unexpected and still put my ears on alert. His songs mean more to me now than they did when Bob was as much little brother as bandmate. Brad and Jeff, bass and drums, muscle us along but they’re both as melodious as the guitars.”

While the Bandcamp files are free to download, Bills says he’s also considering a CD release so the songs can be heard in all their uncompressed glory. Best of all, the original tapes also hold unreleased songs that may finally be revealed. The Taoist Cowboys disbanded in 1992 as each member moved on to jobs and family, leaving behind an all-too-brief recorded legacy of great songs.