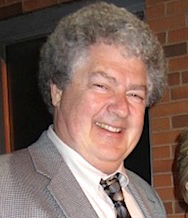 It was 1994, or thereabouts, and I was a young pup working for Lamar Alexander with the unlikely title of Editor in Chief (air quote air quote—I can’t bring myself to put them in any kind of proper place) of his 1996 presidential campaign. Long story.

But I’d shown up bright and shiny (and in my 20s) to meet with Knoxville’s Associated Press reporter, Duncan Mansfield. Duncan wasn’t working on a story, per se, but knew of me from my days at Whittle Communications, knew that I’d been hand picked for my job by mover and shaker Tom Ingram, and simply wanted to know exactly what I was doing. I wasn’t about to tell him anything, of course, but had been wanting to meet him since first I saw him.

He seemed so warm and fuzzy—a function mostly of his predilection for rumpled khakis, broad-cloth shirts, and near-undone ties. And his hair—oh, that hair!—a furry mop-top that belied the powerful intellect, laser-like focus, and wickedly dry wit of the mind that lay immediately below it. I liked him the first moment I saw him. He had this disarming affect on many—which he used to great effect, I suppose, in his 24-year career as an AP journalist, covering Boston and Columbia, S.C., before ending up here in K-town.

We lunged and parried a bit during our lunch, then settled into amiable shoptalk, as Duncan was wont to do. Duncan had covered Michael Dukakis’ campaign in ’88, and was a font of wisdom about how the press treated candidates. He continued to pry, oh-so-subtly; I continued to deflect with much less finesse. But I enjoyed my time with Duncan—his journalist-first approach was obvious, and I admired it even as I pretended to ignore it. He was top-notch.

But more frequently, he shined as the one person who could truly grasp the magnitude of TVA and understand its inner political workings. His political education, erudition, and command of the effable stood him well in this post. (As did many other e-words, I’m sure—energy, engagement, exactitude, etc.)

So his colleagues were shocked and saddened when Duncan received a cancer diagnosis last fall. He didn’t share the details—all we knew was that it was serious. With a capital-S.

It turned out to be stage-4 pancreatic cancer, one of the most deadly of the lot, and sure enough it claimed Duncan last Thursday, July 16.

His boss, Gail Rymer, described him as “dedicated and strong,” and that he was. The News Sentinel described him as a “dedicated, fair journalist.” He was that, too. As a journalist who insisted on factual accuracy above everything, fairness, and transparency, he was the last of a dying breed. And sure enough, his death is a loss for local media—and for our community.