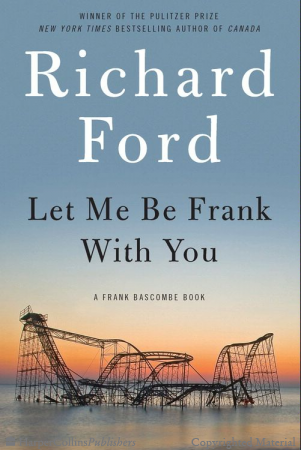 Your public library owns more than 22,000 audiobooks. Most of them are compact-disc packages; a few thousand endure on cassette tape. And an ever-increasing portion of them exist as licensed electronic downloads that our patrons engage using smartphones or MP3 players. (You can search our Overdrive and One Click Digital download databases. And keep an eye out for Hoopla, another multi-media database coming soon.)

During these wind-up weeks of summer vacation season, rest assured that a great many of your shared audiobooks are out there earning their keep—potboiler mysteries keeping drivers alert as they traverse the plains states, or self-help tomes reminding folks to practice patience and mindfulness in the face of beach gridlock or backseat food fights. In the event you find suggestions useful, here are a few.

Richard Ford
Let Me Be Frank With You
These four novellas make up Ford’s fourth work of fiction featuring the flawed yet thoughtful protagonist Frank Bascombe. (The second Bascombe book, Independence Day, won the Pulitzer Prize in 1996.) Bascombe has retired from his lucrative New Jersey real-estate business and is passively assessing holdings, relationships, and the histories that have cultivated them. The setting of New Jersey in the wake of Hurricane Sandy allows for continuity of metaphor between landscape and a narrator coping with his aging self and peers. What has not been ruined entirely is at least cause for discomfort or sympathy. Ford has refined an economy of gesture and vocabulary that is a delight to have at the front of your mind. He reveals glimpses of his process when he bestows it upon his narrator, who observes that the words “no problem” do not mean the same thing as “you’re welcome.”

Hubert Dreyfus
All Things Shining: Reading the Western Classics to Find Meaning
in a Secular Age
What could be better than a recommended book that recommends books? Hubert Dreyfus is the premier pop existentialist of the moment, and here (with co-author and protégé Sean Dorrance Kelly) he does a decent job of demonstrating just how complicated life became when religious routine and dictate ceased to solve all problems. He plumbs a terrific reading list in which he hopes to find—and sometimes does—examples of exemplary behavior and decision-making. The authors make a much better pitch for the moods and manners of Aeschylus and Homer than they do for the moodiness and mannerisms of David Foster Wallace and Elizabeth Gilbert.

Great American Music: Broadway Musicals
This set of lectures by Johns Hopkins University professor Bill Messenger may be the ideal introduction to the Great Courses series. Messenger is a scholar, teacher, performer, and session player. He shares insights gleaned from historical research, personal experience and professional connections. And sure, by illuminating the music of Broadway, a musical mainstay that sends songs into every genre and subgenre, he expands your awareness and appreciation of all kinds of music. There are some surprises. Irving Berlin could neither read nor write music and composed primarily by dictating—humming or whistling—to paid arrangers. And who knew that West Side Story was first conceived as East Side Story, and pitted Catholics against Jews instead of Sharks versus Jets?