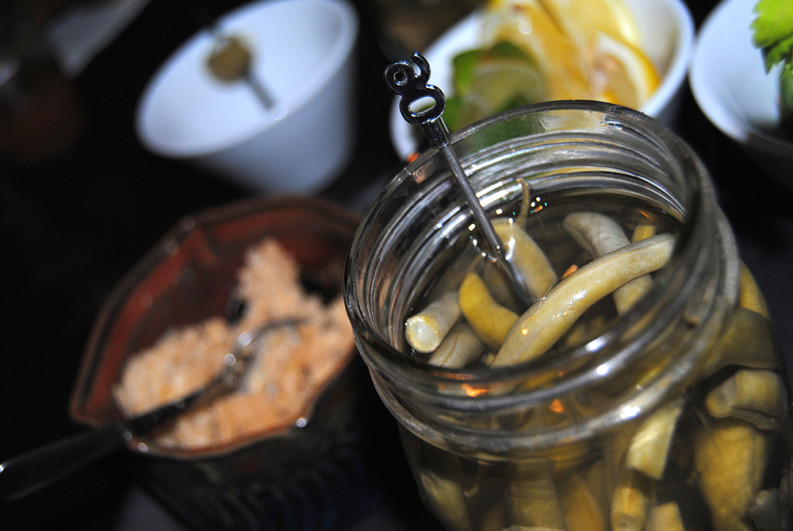 That was our first lesson at the recent local, seasonal ingredient Bloody Mary workshop for Slow Food Tennessee Valley, the outfit dedicated to “good, clean, and fair food for all.”

About 20 of us were tucked into tables abutting the bar at Sapphire downtown, gazing at string lights twinkling across the bar and sampling bruschetta and locally-sourced sausage balls from the Slow Food volunteers. At 20 minutes into the presentation, we were sipping savory, light, garden-burst cups of cilantro Maestro Dobel Tequila Bloody Marys, rimmed with Old Bay seasoning on one side, celery salt on the other. 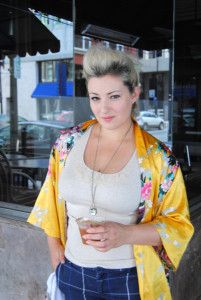 That alone would have been worth the ticket price, really, but then Jessica King assumed control. She has 14 or so years in the business and is former food and beverage director and bar manager for downtown’s posh The Oliver Hotel and Peter Kern Library. She is glamorous—pompadour, dramatically outlined eyes, kimono over lacy tank top. But that’s merely the complement to her bursts of sheer glee, whether she’s describing the fun of smacking around celery leaves before turning them into salt, or joking about how the history of Bloody Marys is indecisive because “people who drank for a living did not keep good records.”

And she clearly intended us to learn something about making Bloody Marys, and so I took notes on a brown paper lunch bag while gripping an ancho chile- and sweet-pepper-infused Tito’s Vodka Bloody Mary in my other hand, followed by a basil-infused gin version.

The alcohol is almost always highly distilled and high proof, she says, but your choices are not limited. Perfectly wonderful Bloody Marys are made with tequila, gin, rum, even bourbon. “The tomato base, a spirit— that makes a Bloody Mary. Everything else is open to interpretation,” she says.

The spice mix is also a fluid concept—people use fish sauce, cream (think bisque), and sesame oil, with success. “Just keep it savory.”

As for garnishes—have fun! Just make sure they are savory, she says, like the blue-cheese stuffed olives or home-pickled dilly beans the class got to sample. Bacon, sure. Celery? “Ah, in a pinch,” she says, with an expression that clearly reads, “don’t you have something else you’ve been dying to try?”

The bulk of the lesson, though, involved learning the step-by-step for local tomato juice that’s been the basis for all these swell sips we’d been having. I christened them Slow Marys, and even though I may never go through every single step in making them, it’s nice to know this process:

Clean—remove anything you don’t want in the juice, like stems, tip and tail of the tomato, and bruises. Bugs, too. And peel? “No!” she thunders, “I don’t understand why people peel! The peel has so much flavor and vitamins.”

Stew—Adding just a bit of water, maybe four cups for a 2-gallon pot, stew the tomatoes over medium-high heat until they are broken down and mostly mush. Maybe an hour and a half.

Strain—use a mesh strainer over a metal colander over the top of a pot to strain out the seeds, as well as the skin and remaining big chunks. Save both! The liquid stays where it is, and the strained matter goes into the blender, preferably a nice juicer, to create a smooth puree. Let everything cool down, then reunite the tomato broth and the pureed mix, adding salt and lemon juice to taste.

Preserve—the fresh tomato juice can be canned in a boiling water bath per manufacturer’s instructions, or frozen, or just stored in the fridge until you need it.

At the end of the class, King noted that the Bloody Mary is a drink you could give a little too much advice on. Sure, she doesn’t like over-salting, and she wrinkles her nose at the thought that some people add molasses to their mix. But she’s tinkered a lot with this recipe and encouraged the same from us class members.

“It has a lot to do with interpretation,” she says. “What tastes good to me. That’s what makes me happy.”

For a batch of Bloody Marys, Jessica King recommends your tomato juice choice mixed 2-to-1 with this spice mixture, with spirits added to taste. She prefers a 3-to-1 or 4-to-1 ratio of mix to spirits, but it’s up to you.

2 oz. black or white pepper, or a
combination of the two