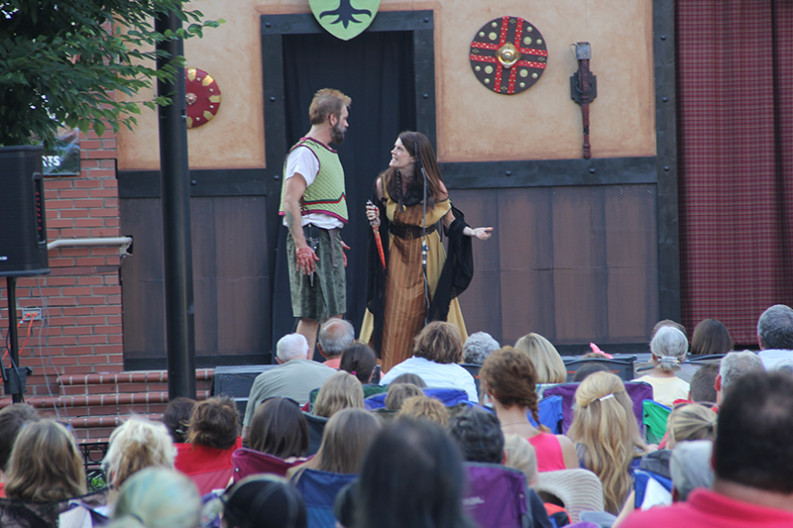 Productions of Shakespeare’s work have a deep history in Knoxville.

First launched as Shakespeare in the Park in 1991, at World’s Fair Park’s Tennessee Amphitheatre, the Tennessee Stage Company’s month-long Shakespeare production consists of two rotating plays, usually faster, livelier versions of the originals. Since 2003, TSC Artistic Director Tom Parkhill has produced it on Market Square. There, each production draws an audience of about 300 per night.

Staub’s Opera House, at the southeast corner of Gay Street and Cumberland Avenue beginning in 1872, was known for vaudeville but occasionally hosted some Shakespeare. Around 1905, the well-known Broadway actress Viola Allen played both the roles of Perdita and Hermione in The Winter’s Tale at Staub’s.

Savannah-born actor Charles Coburn (1877-1961) began a residency at Staub’s in 1902. While here, he formed an acting company known for Shakespeare plays, and once performed A Midsummer Night’s Dream for the public at Cherokee Country Club’s golf course. In the summer of 1915, the Coburn Players put on a summer production of MacBeth during a convention at UT. Coburn was later a recognizable actor in several major Hollywood movies.

John Cullum, born in Knoxville in 1930, grew up in the Island Home neighborhood, and did some of his first performing at the Bijou and Carousel Theatres. In 1964, he played Laertes in a famous Broadway production of Hamlet, opposite Richard Burton as Hamlet, Hume Cronyn as Polonius, and John Gielgud (before he was Sir) as the Ghost.

In September, 1964, Knoxvillians packed the Tennessee Theatre to watch a screening of a recording of that live show. The movie was the first local demonstration of “the Miracle of Electronovision,” a groundbreaking new videotape technology.

In 2007-8, Cullum played the title role in a rare Broadway production of Shakespeare’s Cymbeline.

Since 1962, when he played a supporting role in King Lear, Cullum has become part of the history of New York’s annual festival Shakespeare in the Park, an inspiration for Shakespeare on the Square. Cullum’s director in 1962 was Joseph Papp, who founded the festival. In 2011, at age 81, Cullum played roles in two plays at Manhattan’s Shakespeare in the Park, Measure for Measure and All’s Well that Ends Well. Now 85, Cullum is still active in the New York theater, and recently returned home for a reception at Clarence Brown Theatre.

The University of Tennessee’s Clarence Brown Theatre has staged dozens of productions of Shakespeare’s plays. Several of Clarence Brown’s early productions starred resident thespian Anthony Quayle, known for Shakespearean roles, notably in the famous 1948 film Hamlet, when he played Marcellus, opposite Laurence Olivier. Quayle (1913-1989), a British citizen, was later knighted, but lived in Knoxville for a few years as he directed CBT productions. Quayle was so pleased with a 1975 Clarence Brown production of MacBeth, in which he played the title role, that he took it on the road, performing in several cities in the South.

Tennessee Stage Company’s productions of MacBeth and The Taming of the Shrew are being presented Thursday through Sunday at 7 PM until Aug. 16. For more details, see tennesseestage.com.