Shake-Ups and Breakups: News From Tina Tarmac and King Super - The Knoxville Mercury 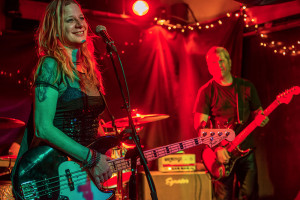 • Local powerhouse hard-rock band Tina Tarmac and the Burns is burned out, at least for the time being—the former power trio is down to a duo after the departure of drummer Derek Harvey. According to bassist/frontwoman Sara Washington, Harvey wasn’t interested in playing as frequently as she and guitarist Blake Womack wanted to, and he didn’t want to spend weekends playing out of town.

“Blake and I wanted to continue playing live on a regular basis and get to the next chapter of Tina Tarmac and the Burns,” Washington says. “We had a show in Johnson City about a month ago, and you know how out-of-town shows go—there wasn’t anybody there and it wasn’t promoted well. It kind of sucked his spirit out.”

In a June interview, Washington, Womack, and Harvey all talked about their plans to record a new five-song EP to follow up last year’s self-titled debut EP. Those plans are on hold for now, but Washington and Womack have started officially looking for a replacement for Harvey.

“I thought about just packing it up and shelving it and going to play with another band, but I don’t think I would be satisfied with that right now,” Washington says. 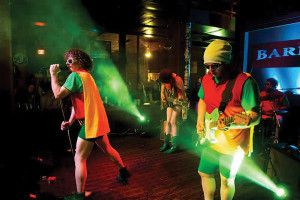 • King Super and the Excellents, described by this publication in April as “Knoxville’s most original cover band, or maybe the city’s best original band that plays covers, or maybe just the most entertaining band in town, with no qualifications,” went out with a bang last weekend. The group, known for its extravagant costumes, impeccable musicianship, and unexpected cover selections, has called it a day after five years together—“After five or six years, the joke stopped being fun for us, and we’re just ready to move on from it,” drummer Steve Corrigan told The Daily Times last week—but not before a pair of performances at the Shed at Smoky Mountain Harley-Davidson, in Maryville, and Preservation Pub.

“It’s not the same without the other joker up front,” he said. “It’s a whole different situation, and it feels different. We’re not necessarily saying we’ll never play again—we’ll probably play a few shows here and there, but everybody’s life is continuing to move.”