Purple Bounty: Bring on the Eggplant! - The Knoxville Mercury 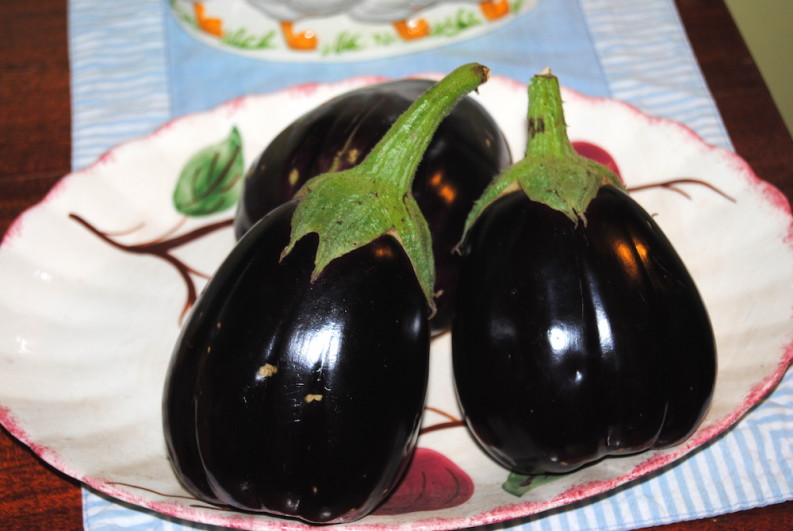 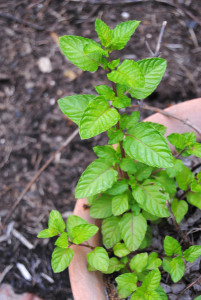 Who knew a trio of Black Beauty eggplants would bring on such a flurry of self-evaluation?

I’m good at resisting the “You’re Okay, I’m Not Okay” self-speak, so I wasn’t being critical so much as… comparative.

It started with, “Why eggplant?” Everyone on Facebook—and isn’t that everyone?—seems to be pulling squash out of their East Tennessee gardens hand over hand. Me, I have squash bug devastation. And four prickly, upside-down feather-duster-shaped eggplant plants in emerging domination mode, with their younger brothers from other seed envelopes waiting in the wings. This makes me, I guess, not exactly odd, but—offbeat? Eccentric?

Or how about a “good planner”? Because I knew the powers that be would—sixth year running—thwart my cucurbits like yellow zucchini.

But the eggplant, ha ha—nightshade! And though for the second year running flea beetles are making the leaves look like low-rent luminaries, I have produce!

And upon closer inspection, I might also have kind of a bad attitude. Because it’s July and already I am mad to preserve. Yet, I resent the “save a bit of summer for later” talk among the preservers. I’ve had enough of the swelter of summer, thanks, and storms of Biblical proportions, and this summer need never revisit my place, not even on a spoon.

Here, now, is where I start turning the corner on the navel gazing. Am I a little strange? Sure. A bit bizarre? Absolutely. Kind of cool? Indeed! Because while everyone knows someone growing great bushels of squash, who else has not one but two recipes for saving eggplant that have a really good farm-to-table taste year ’round and are not at all reminiscent of dining a la humidity?

Yeah, okay, I had to spend a bit of extra time finding the first recipe, Eggplant and Garlic Patties, being as it was in Jane Butel’s Freezer Cookbook from 1976, not Hazel Meyer’s from 1970, and kind of hidden between some ’90s manga novels and a first edition of In Cold Blood. But it’s worth it, for this recipe where you freeze the batter, replete with panko crumbs and free-range eggs from the Loveday’s stand on Chapman Highway, no annoying breading involved.

The other recipe, Pickled Eggplant With Mint, tastes so right on a mezze plate drizzled with some olive oil, any happy hour day of the year.

I don’t really worry about whether having this recipe on hand from a 2014 cookbook, Preserving by the Pint, makes me eclectic—because I am slicing the ends off these really gorgeous, shiny, black-purple eggplants, to the apple-green flesh below. Cracking those free-range eggs on the side of a oversize Anchor Hocking measuring cup, mixing mint leaves from my favorite Berries and Cream plant with garlic bits, and pouring hot vinegar over all.

I get lost in these moments, these days, of saving the bounty for a second bout of enjoyment. Who cares what anyone, myself included, thinks?

The scent of the garlic patties that will bypass the freezer brings me back, sizzling in olive oil, the crumbs getting crunchy, the Parmesan melting just so.

They taste good on their own, or with a bit of crème fraîche, or maybe some chopped yellow pear tomatoes and kalamata olives on top.

I pause for a second. Those eggplant-mint pickles, I think, they would be good with the patties.

Or would that be too weird?

Rinse eggplant. Do not peel. Remove green top, then dice in small quantity of water.

Cook eggplant on high heat until steaming then reduce heat to low to finish cooking. Cook until eggplant is soft.

Drain, reserving juice. Add 1/4 cup liquid back to eggplant. Add salt, garlic powder, pepper; flour or crumbs, and egg. Mix ingredients together. If desired, freeze in rigid carton at this point. (A maximum of 8 months). To cook, thaw several hours then proceed with recipe. 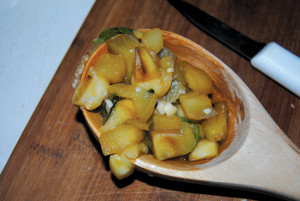 Prepare a small boiling water bath and 3 half-pint jars according to manufacturer’s instructions.

Pour the vinegar into a medium saucepan and bring to boil. Once it boils, add the eggplant and simmer for 2 to 3 minutes.

When the time is up, remove the eggplant cubes from the vinegar with a slotted spoon and place them in a bowl. Add the garlic, mint, and salt and stir to combine.

Pack the eggplant, garlic, and mint into the prepared jars and top with the boiling vinegar, leaving one-half inch of headspace. Tap the jars gently to remove bubbles and add more liquid to return the headspace to one-half inch if necessary.

Wipe the rims, apply the lids and rings and process the jars in a boiling water bath for 10 minutes, according to manufacturer’s instructions.

Except for the abbreviated canning instructions, this recipe comes from Preserving by the Pint by Marisa McClellan (2014, Running Press)