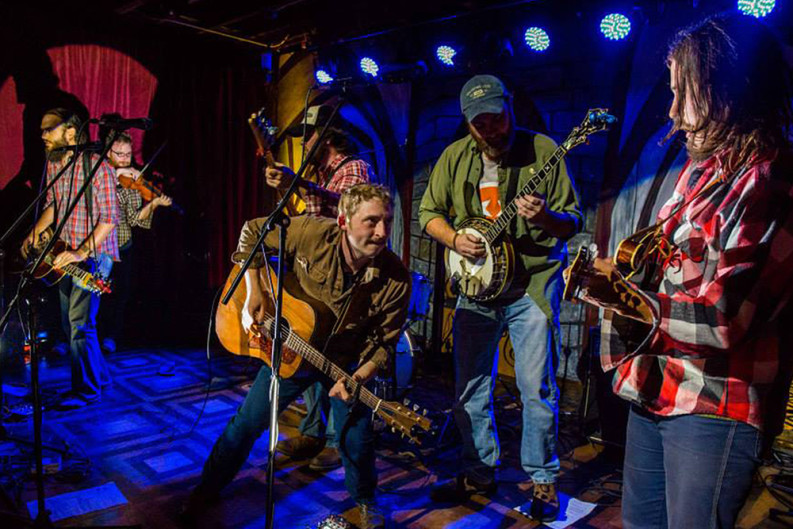 Knoxville band Dixieghost is pushing back against what it means to be a folk band. The band’s lead singer, songwriter, and guitarist, Jason Hanna, a Knoxville native, is trying to distance his band from mainstream radio-friendly folk groups like Mumford and Sons while staying true to his and his bandmates’ traditional folk and Appalachian roots.

In the seven years since Dixieghost released its first self-titled album, with an almost entirely different lineup, the bluegrass-influenced band has developed a more confident voice and a more refined idea of the kind of musicians they want to be. On their new album, Wine and Spirits, Dixieghost’s progressive style helps them stand out from similar groups without betraying the standards of traditional folk, country, and bluegrass.

New tracks like “Tennessee Home” and “Utah” directly reference the band’s Appalachian roots. “Utah,” in particular, written from Hanna’s time spent living out West, speaks to a longing for Tennessee and for the sweet tea, rivers, and whiskey that help make the state what it is—but it also speaks to the complications of nostalgia.

Wine and Spirits is perfect music for sitting in a coffeehouse or around a campfire. The album is a consistent mix of folk and bluegrass, but it works even for non-fans, too; the lyrics can speak to anyone who has experienced longing and loss.

“What we didn’t want to do was have a bunch of songs about typical subject matter,” Hanna says, “And that’s something we’ve always tried to do, not be that kind of predictable bluegrass band. … It’s pushing back on some of these country tropes.”

The first track on the new album, “Clermont,” pays tribute to the famous Clermont Lounge in Atlanta, the first and oldest strip club in the city. The song also mocks one of biggest names in contemporary folk-rock, Mumford and Sons, with a music video recreating the band’s infamous expulsion from the lounge in September 2013.

Dixieghost reinforces folk’s protest traditions with the song “Sweet Rose,” in which Hanna says he will provide for his lover, but “won’t be choking my throat with a blue collar on to make green for the white-collar man.”

Wine and Spirits follows the formula for traditional folk, but just barely, Hanna says. “There’s a bit of Southern gothicness to it,” he says. “A lot of the songs are based on some of the darker aspects of religion and sex.” The album is a solid accomplishment from a band that has added four new members since its previous record—Will Carter on Dobro, David Leventhal on banjo, Seth Hopper on fiddle, and Chance Leadbetter on mandolin—and experimented with dozens more. Hanna and longtime friend and bassist Justin Nix are the only original members of Dixieghost left. Hanna and Nix have taken the opportunity to revisit their older work on Wine and Spirits—the new album contains reworked versions of three songs from the band’s first album (“Ghost Town,” “Mickey Greene” and “Sand in My Boots”).

The new album is also the impetus for a busy summer and fall for the band. Dixieghost plays at Barley’s Taproom and Pizzeria in the Old City on Friday, July 24, for the release party for Wine and Spirits and will join Sam Quinn, the Tim Lee 3, and others on Saturday, July 25, at the Shed in Maryville for a tribute to Neil Young. They’re also scheduled to play at the Louie Bluie Music and Arts Festival, in Caryville, and the Johnson City Folk Festival in September.

Dixieghost plays at Barley’s Taproom and Pizzeria on Friday, July 24, at 10 p.m.