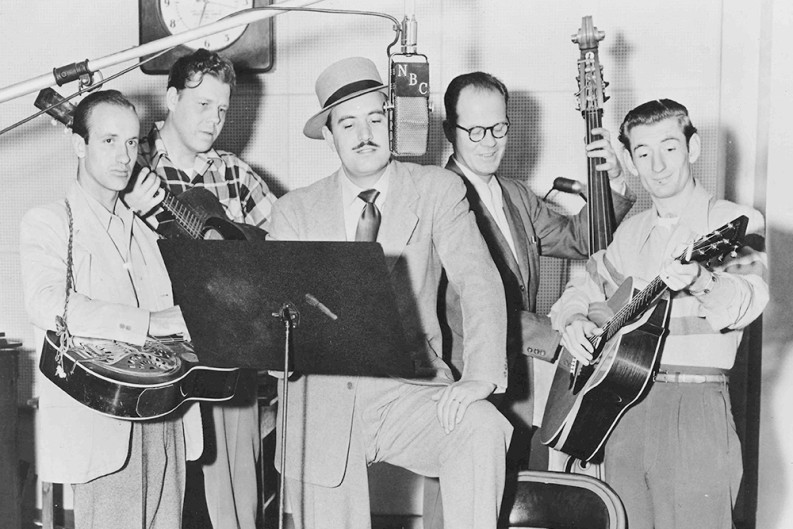 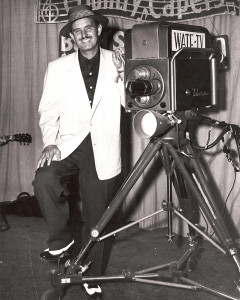 Archie Campbell keeps turning up at the Tennessee Archive of Moving Image and Sound. Archie’s son Phil (who you may remember from “Malfunction Junction,” a song that played on local radio a lot in the early 1980s) is the primary source for a wide variety of materials. He donated a collection years ago that included films, videos, audio recordings, and photographs. There were a lot of home movies, and some peculiar gems like the pilot episode for Skeedaddle, a late 1970s attempt at a country music-themed game show hosted by Archie.

Viewed today, Skeedaddle seems like a high-corn artifact, and one wonders what Archie made of it at the time. An audience of Music City tourists is given a chance to win $50 by answering questions like “Which way does a pig’s tail curl?” and “Do a jackrabbit’s ears stand up or lie down when it’s sleeping?” The set is mostly bare-bones, but it does include a haystack, which an audience plant named Marvin Muffknuckle is asked to find a needle in, and rocking chairs for the contestants. One of their challenges is to guess how many balloon eggs celebrity guest Minnie Pearl can pop/hatch, by sitting on them, in 45 seconds. (A respectable 11, it turns out.) It’s a curio, to be sure, but gives an idea of the breadth of projects in which Archie was involved.

Last year, Phil called up and said he was cleaning out his house and had another large donation for TAMIS. It turned out to be quite a haul: boxes full of personal papers, rare recordings (including acetates), and several reels of film. The films included some cartoons and short features, commercial releases not uncommon among people who had 16mm projectors in their homes, and several more home movies, including an interesting reel of Archie dressed as his Grandpappy character, strolling through the woods. It might have been raw footage for a longer film, or maybe some sort of screen test to see what the character looked like on camera.

When TAMIS archivist Bradley Reeves unraveled the first few feet of a particular reel to get an idea of what it might contain, he was about as excited as I’ve ever seen him. The reel was a three-minute Kodachrome film of several WNOX stars performing at Chilhowee Park in 1948. Featured are Archie, Homer and Jethro, Carl Story and His Rambling Mountaineers, Bonnie Lou and Buster, Red Rector, and Chet Atkins. The footage is silent but in excellent condition and a true rarity for its time. Reeves was so excited because he had previously seen Archie’s grainy Betamax video copy of the film, taped from a projection on a wall, and had been looking for the original film for years. It’s the second-oldest piece of WNOX film footage at TAMIS, following a minute of footage from 1944.

About a month ago, Phil found a few additional reels hiding in a basement closet, including more home movies and some television commercials for Selecto Ham and Bush’s Beans, co-starring all-but-forgotten wisecracking accordionist Ralph Cornish, who was a quite active musician around town in the 1950s.

Recently, Reeves was at the home of a friend who has collected a staggering amount of 8mm and 16mm films, some very rare, trying to find Tennessee related content. He discovered a promotional clip of Archie, guitarist Red Kirk, and Dobro great Speedy Krise performing gospel favorite “Were You There?” The trio appears on a small set dressed to look like a living room. At least three such films were shot on this same set one day in the late 1940s; “I Care No More” and “Nobody to Love” are available to view online at the Internet Archive. Those are in color, while “Were You There?” is a black-and-white print, but so far it’s the only known copy to have surfaced. It was uploaded to TAMIS’ Vimeo page recently, and via Facebook shares it was watched hundreds of times in just a few days. Comments indicate how fondly Archie Campbell is still remembered.

“I think Archie’s an underrated singer and an all-around great entertainer,” Reeves says. “He was a workaholic, was always involved in several projects, and has connections to just about every country performer who worked in Knoxville. His legacy is so much more than Hee-Haw.”