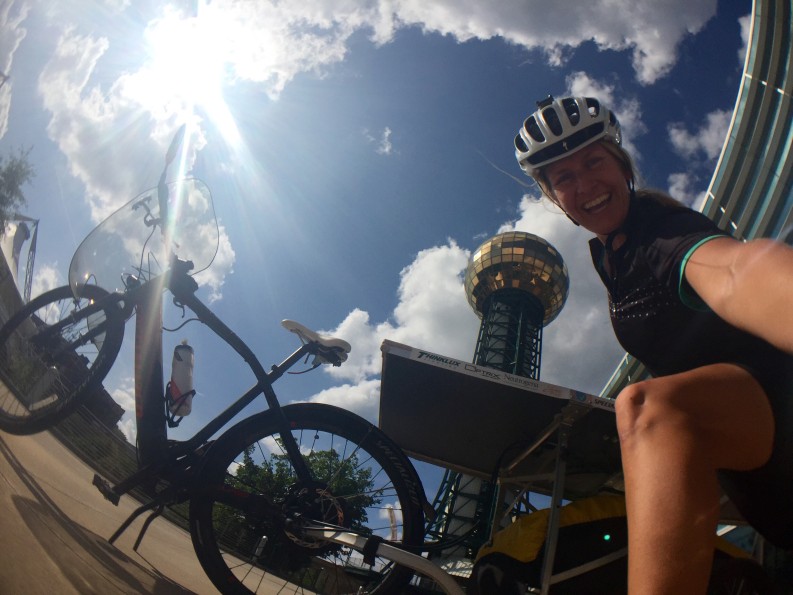 With a little help from the sun, Marissa Muller wheeled into Knoxville on Tuesday carrying with her a message she hopes to deliver coast-to-coast.

“The whole mission is really to get well and to do well,” Muller says. “So personally just resetting (and) rebalancing, physically (and) mentally getting stronger, and engaging communities and businesses along the way to see what we can do better for the community at large and the environment.”

For more than two months now Muller has been pumping and pedaling her solar-powered electric bicycle across the United States, from Ventura, Calif. to Knoxville and ultimately on to New York. When all is said and done she will transverse 10 states and more than 3,000 miles.

The 34-year-old said she decided to take a cross-country jaunt to “ignite a wellness revolution” after getting burned out on work and rejecting some of the social constraints polite society likes to tack to our self worth.

We ran into Muller Tuesday afternoon at Flow Brew Parlor downtown just a few minutes after she rolled into town. She’s only here for a day, then it’s off toward Roanoke. But over the next 24 hours or so she plans to take in what our fair city has to offer. You may catch her and her solar panels cruising along Gay Street or ambling through Old City.

Here’s what she had to say about her trip so far: