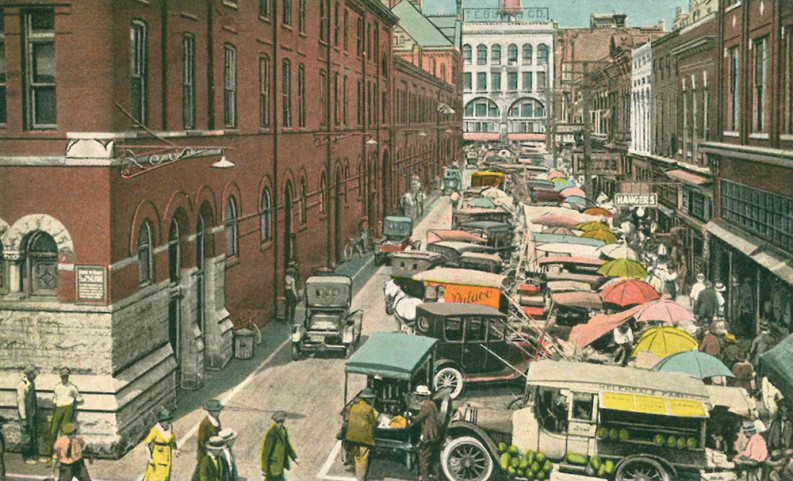 Every Wednesday and Saturday in the warmer months, Knoxville witnesses a 161-year tradition.

It began in 1854, when ambitious young developers William Swan and Joseph Mabry donated land to the city for a public market. The city built a small market house on the site. A one-story brick building with arched openings, similar in style to market houses in other cities, but small. It covered roughly what’s now the grassy area on the south end of Market Square.

According to the original plan, it would be a small market with plenty of open space forming a modest-sized square. As Mabry and Swan suspected, the public market space increased the value of the land around it. It was slow to start, but by 1859, several buildings had risen on either side of the space, framing a Market Square. By 1870, two rows of buildings framed the space, and it had the appearance of the square as we know it today.

Selling local produce was the only original purpose of Market Square. It was hardly five years old, however, before it was attracting other kinds of businesses, like “Peter R. Knott’s Bowling Saloon,” probably Knoxville’s first bowling alley, which appears in the 1859 city directory. It was in the vicinity of what’s now Tomato Head. Over the years, Market Square has hosted groceries, clothing stores, saloons, newspaper offices, boarding houses, restaurants, a large bakery, a hotel, apartments, a sculptor’s studio, saddleries, a candy factory, barbers, sausagemakers, art teachers, shoe stores, jewelers, a gunsmith, detectives’ offices, and small movie theaters. Business owners were widely diverse, including a few blacks, and many German, Swiss, Jewish and Greek immigrants.

In 1868, Knoxville built its first City Hall on the north end of Market Square. It contained a police station, small jail, and garages for firetrucks. A bell hung in its tower could be heard throughout the city and alerted the citizens to public emergencies. Some of the first black elected representatives in the South were aldermen who attended meetings there.

Over the years, the Market House lengthened, eventually abutting City Hall. In 1897, the city built an enormous new Market House, a tall, brick Victorian building with rental space for about 60 vendors on the ground floor, and public facilities, offices, and an auditorium upstairs. It was a versatile building, but it limited the square’s open space to two wide alleys on either side.

The Market House was torn down in 1960, ending a decade of debate about saving it, and the square tranformed into a modernist pedestrian mall. It provided shelter and a public bathroom for agricultural merchants who wanted to keep selling in the traditional space.

Farmers kept coming to the Square, but dwindled over the years. By the 1990s, only one farmer, Sherrill Perkins (1937-2013), who had a farm in the Seven Islands area of East Knox County, was appearing on the Square regularly, to sell produce.

Around 2000, in response to development pressures, the city reimagined old Market Square, in large part by simplifying it and bringing back some of its original Victorian look. After some question about whether there was still a place for farm produce on a new square with restaurants, bars, and shopping, a small group of young people organized the Market Square Farmers Market. At the front of a national local-foods movement, the MSFM strictly emphasized produce grown within the Knoxville area. It was a new idea that revived an old ideal.

It has grown, and in recent years is a two-block phenomenon with about 110 vendors every Saturday, selling corn, squash, kale, 30 or 40 kinds of hot and mild peppers, and other vegetables, including, this time of year, more than a dozen varieties of tomatoes. Plus local milk, beef, chicken, pork, coffee, and baked goods–as well as food trucks and carts, and other locally produced goods like pottery and fashion accessories.

July is the best time of year to try the Market Square Farmers’ Market, to get the freshest possible produce from the farmers themselves, and participate in a tradition that’s been going on in the same spot since before the Civil War.