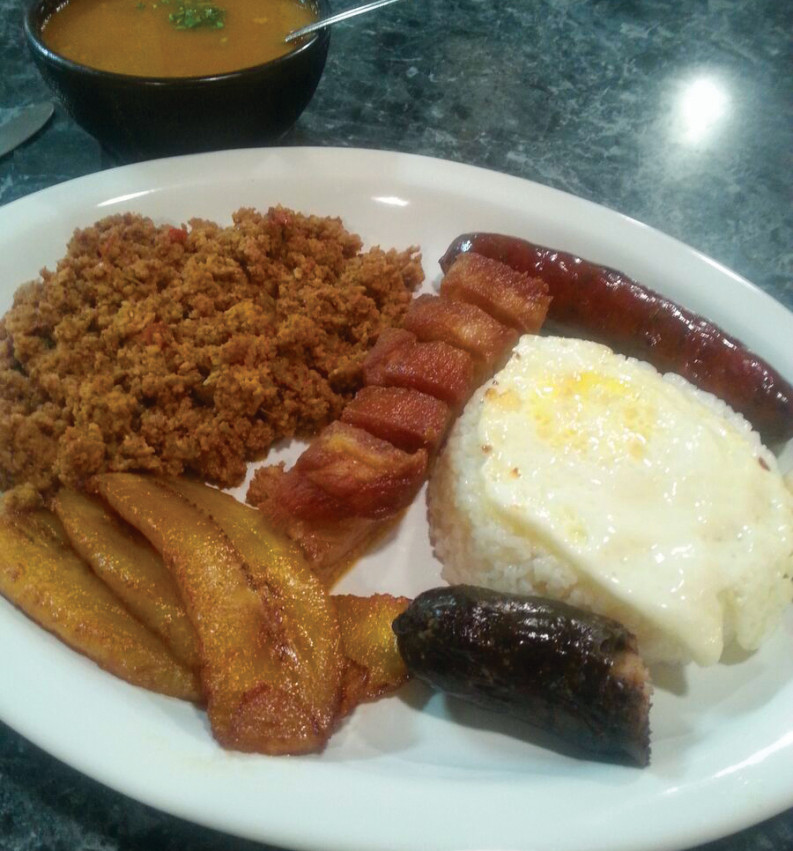 There are few things as exciting to local diners  as the opening of a new restaurant, but, of course, not every opening thrills equally; there’s not much to cheer about if there’s another El Nada Mexicano Con Mucho Queso opening down the street. But if a premiere comes with the promise of a new gastronomic experience, then Katie bar the door. I don’t know if crowds of foodies have yet assailed the gates of Leños and Carbón Latin Cuisine, but it’s certainly an exciting addition to Knoxville’s increasingly diverse gustatory options.

Leños and Carbón is located in a small strip center on the north side of Kingston Pike, just about a mile and a half west of Lovell Road. The center is set back a little, with some welcome trees between the street and the parking lot, so you’ll want to keep an eye out for the turn. Inside, the place is bright and cheery, as are the many smiling faces that greet you. Despite the fact that new restaurants are often the home of intense smiles, these happy salutations seemed genuine; that was surprising, since my late lunch coincided with what appeared to be a staff meal. Of course, their smiles might have had nothing to do with my presence—after all, they, like me, were about to eat well.

It may be that Leños and Carbón is Knoxville’s first Colombian restaurant, though there’s a chance you’ve sampled some of this distinctive South American cuisine at Knoxville’s HoLa festival; that’s where owner Erika Carvajal and her family first introduced their native cuisine to local eaters. Carvajal says that’s also where the idea for the restaurant was born. “People loved our food, and every time we went, they would always say, you guys should open a restaurant.”

While their menu includes regional specialties from Puerto Rico, Cuba, and Venezuela, Leños and Carbón is first a Colombian restaurant. “Half of the menu is from Colombia because we wanted everybody to know our culture, and for the other half we added some dishes that are very popular within our Hispanic community, food from Puerto Rica, Cuba, and Venezuela,” Carvajal says “But most of the main dishes are Colombian.”

At the suggestion of my buoyant host and server, Freddy (who is also Erika’s husband), I tried the house specialty, bandeja paisa. It’s the dish that you’re likely to see first on a quick Web search for Colombian food, and, for some, it’s considered the national dish. For me, it was an impressive, if daunting, $12 lunch. The first thing to know about this cuisine is that it loves meat. When Carvajal says, “We use a lot of meat on our plates,” she isn’t kiddin’ around. The bandeja plate comes with ground beef or steak, Colombian sausage, blood sausage, and chicharron (pork skin). All that’s in addition to rice, sweet plantain, an egg, an arepa (a corn cake), and a separate bowl of beans.

Before you turn up your nose at the thought of blood sausage, think again. As adventurous an eater as I am, this foodstuff has always been a challenge to me, but Colombia’s take on blood sausage includes rice and an aromatic mélange of spices including lots of cumin and garlic. After the first taste, I was able to banish the thought of the name of what I was eating and enjoy a really savory and delicious sausage that made for a stunning flavor sensation when eaten with a mouthful of fried egg and rice.

Likewise, pork skin doesn’t always appeal unless you call it pork rind and enjoy it deep-fried at Knox Mason. The Colombian version is quite different; their chicharron is, unsurprisingly, a very meaty cut that offers both the pleasures of crispy skin and tender meat. There’s plenty of fat in between, but that is as easy to avoid as it is to enjoy.

The arepa is a delicious little grilled disk made from corn meal, but it’s not particularly granular like many corn breads. These show up in different ways on the menu; aside from being a side offering, they can be small or large, slathered in butter or stuffed with cheese, ham, ropa vieja, etc.

While Colombia might appear to be a land of carnivores, the beans, which alone would have made a satisfying and delicious lunch, are surprisingly not cooked with pork. Carvajal laughs when I mention that Colombia doesn’t seem like a vegetarian paradise. “The beans are prepared differently in our country,” she says. “They’re not smashed. We serve them more like a soup. To make them thick and rich and heavy we put plantain in them. That way they’re more creamy and rich. We don’t put any meat in them.”

Despite the meaty tendency of this country’s appetite, Colombia is home to a vast array of exotic fruits. Leños and Carbón shows that off through a selection of juices, including known quantities like papaya and blackberry alongside some flavors that are less familiar: soursop, guaba, and tree tomato.

Both Freddy and Erika were quick to point out another important fact about this cuisine: While it’s very flavorful, it’s not overheated. “In our country, we don’t eat anything spicy, but we offer it because people like it,” Erika says. The servers will offer you some good hot sauce, including some homemade Vera Cruz-style heat, if you really want it. But it would be a shame and a real loss not to at least try the food as it’s traditionally served. Still, if you’re inclined to over-season your food, the Carvajals and their staff will shrug it off, because, Erika says, they’re used to people misunderstanding the food.

“Most of the people here, they think Latin food and they think Mexico,” she says. “Our food, it’s not like that. Our food is more home-style.” Still, she adds, “We want you to make yourself at home, because it’s homemade food.”

Despite the newness of Colombian food to our city, the food here isn’t that far away from the qualities that define much Southern and soul food—the cooking is earnest, straightforward, a little rustic, and it recalls tastes of home and comfort. It’s not hurried, and neither should you be when dining at Leños and Carbón. It can take a minute, and, according to some diners, service can be slow, though that was not my experience. Nevertheless, slow service is often part of a restaurant’s opening pains, but if that is true here, part of it may result from the honest approach to cooking.

“We take our time with each dish,” Erika says. “We want it to feel like it’s homey, like a dish that your grandmother’s making.”

Also: See Dennis Perkin’s other Latin dishes to look for in Knoxville.